If you’ve been bodybuilding for a while or spend some time reading bodybuilding websites and forums you probably know how important squats and deadlifts are.

Experienced bodybuilders consider them to be the best exercises for building solid mass.

In fact, a lot of guys only perform those exercises (along with a handful of other compound exercises) claiming they are far more effective at building muscle compared with isolation exercises.

Having said that, there are also a lot of debates about which of the two exercises is more effective at building mass.

Today we are going to breakdown the benefits of each – of course that doesn’t mean you shouldn’t still be performing both! 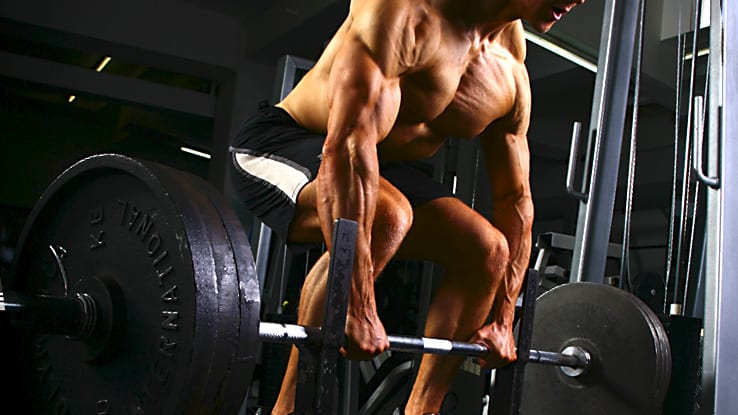 While the motion of a deadlift and squat might seem similar to someone who is new to the sport the two movements are actually quite different.

The deadlift begins with your hips in a higher position and the range of motion is shorter compared to the squat.

Depending on how you position your feet and how you hold the bar you can alter the squat to work different areas of the legs such as the quads, hamstrings, calves and glutes.

The deadlift on the other hand tends to focus on the hamstrings and glutes as they generate the force necessary to get the bar off the ground.

Quads and calves still play a supporting role in the deadlift but they are not the primary movers.

If we are looking at the two exercises to determine which one would be a superior leg builder it would have to be the squat.

An easy way to tell is to compare the leg sizes of powerlifters who deadlift compared to those who squat.

While the guys who deadlift certainly don’t have chicken legs the ones who squat have impressive tree-trunk legs.

Having said that, the guys who deadlift will definitely have strong backs and hips.

A major issue with the deadlift that is frequently brought up is the fact that there is no real negative portion of the lift.

You are essentially lifting the weight from the floor for each rep which is very taxing on the CNS.

Therefore, doing frequent heavy deadlifting can definitely lead to some nasty injuries – if you spend enough time bodybuilding you will meet some guys who mess up their backs because they do too much heavy deadlifting.

If you are deadlifting heavy weight three times per week you definitely want to reduce that.

Deadlifts Do Not Translate to Bigger Squats

Guys who spend a lot of time and effort squatting are often surprised when they try to deadlift for the first time – the strength they build translates well into the deadlift.

. Having said that, the squat definitely won’t build your grip and forearm strength the way the deadlift will but those can be trained with other exercises.

While a strong squat definitely translates to a strong deadlift the opposite is not the case.

Given that the deadlift mostly works the hips and has a short range of motion you simply don’t build up enough leg strength.

Someone who can deadlift 400lbs might even struggle with 300lb squat. However, having a 400lb squat usually translates to 400lb+ deadlift.

An important factor in determining someone’s ability to deadlift or squat is the way the body is structured.

For example, if you have long arms you have an advantage when it comes to bodybuilding as you don’t need to lean down as far to grip the bar.

However, people with long arms also tend to have long legs which make squatting more difficult.

Therefore – although you have an advantage when it comes to deadlifting it won’t translate to a stronger squat.

Strong squatters on the other hand tend to be short and stocky.

As a result the range of motion on the squat is very small so it’s easier to lift heavy weight. However, because these guys tend to have shorter arms they have a difficult time deadlifting.

If you are currently spending a lot of time deadlifting in order to improve your numbers you might want to reconsider your workout.

As mentioned earlier, heavy deadlifting is very taxing on the body.

Some people feel that doing them more frequently will help overcome genetic issues that make them weaker at the exercise.

In reality you can make yourself a lot stronger at the deadlift with other exercises such as the squat and good morning.

That way you won’t need to deadlift as often thereby decreasing the chance of ending up with a nasty injury. 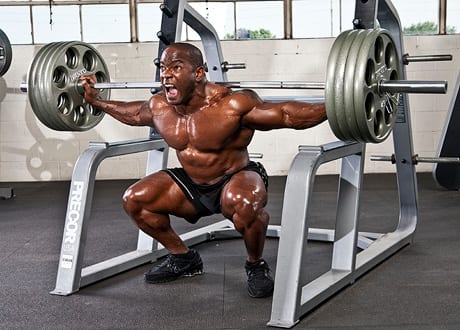 Building a Massive Back

Look, there is no doubt that squatting heavy weight requires some solid back strength.

You need to be able to keep your body stable which is where the spinal erectors come in.

However, deadlifting is the ultimate exercise for building back thickness.

Anyone who has a strong deadlift will also have an impressive back. It’s simply necessary to have a big back if you want to be able to lift that heavy weight from the ground.

Which is the Bigger Mass Builder?

When it comes to overall development as you can probably tell the squat is the superior exercise.

However, depending on your goals you might be better off focusing on the deadlift. Guys who want massive legs are obviously going to want to emphasize the squat.

However, if you want to have a huge back, traps and forearms definitely go with the deadlift.

Of course, that doesn’t mean you can’t do both and build great legs and a thick back.

Did You Know This?

Testosterone plays a key role in building muscle so having higher levels is definitely going to make you build muscle at a much faster rate.

With higher testosterone levels it’s easier to build muscle, why make it any harder than it needs to be?

Your goal as a natural lifter should be to do everything you can to keep your natural testosterone production optimal.

According to studies published by the US National Library of Medicine some ingredients have been researched and can increase natural testosterone production.

So what can you do with this information?

If you are one of those guys who is serious about raising your natural testosterone levels and build muscle at a faster rate these testosterone boosting ingredients are crucial and you should consume them as a part of your diet.

The easiest way would be to find a supplement that contains these ingredients and potentially other ingredients that have been successful in raising testosterone levels.

1 thought on “What’s Better for Building Mass – Squats or Deadlifts?”