It is no secret that animal farming is terrible for the environment. However, it is also common knowledge that veggie burgers kind of suck compared to “the real thing”. Sorry veggies, you know it’s true. But fear not, a Californian start-up is hoping to create synthesized, meat-free cheeseburgers by 2016.
Impossible Foods is using resynthesized plant matter to create vegetarian cheeseburgers that won’t just be good for the environment, but should taste pretty awesome too. They separate specific proteins, fats, amino acids, and vitamins from vegetables, beans and grains and then reconfigure them based on the flavor and texture they give. The result is a meat-free product which tastes and feels just like an actual cheeseburger. Apparently, it even sizzles and smells like meat when it fries. 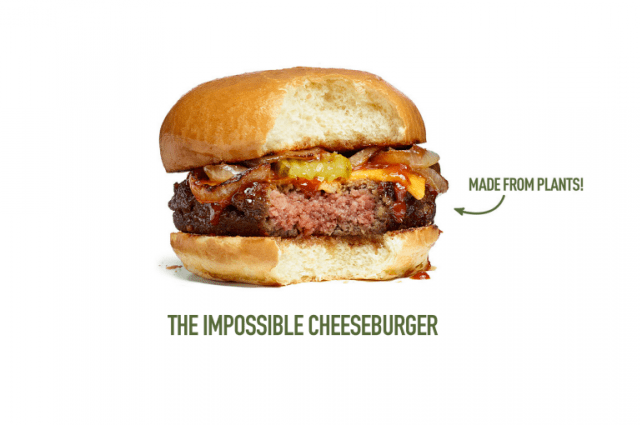 The idea was all started by former Stanford biologist Pat Brown. Along with a team of 80 other scientists, engineers and chefs, he’s hoping to spark a new paradigm shift in the way we create and eat our food. Their marketing is aimed at hardened meat eaters and not preaching to the converted vegetarians. “We are not trying to make a meat alternative,” says Pat Brown, speaking to The Financial Times, “We are making meat a better way.”

Talking to The Economist, Brown said: “Animal farming is absurdly destructive and completely unsustainable. Yet the demand for meat and dairy products is going up.” Indeed, cattle farming alone is a major contributor to many of the environmental concerns our planet faces. Furthermore, it is simply unsustainable: in the U.S. it requires 10 kilograms (22 pounds) of feed and 15,500 liters (3,400 gallons) of water to produce 1 kilogram (2.2 pounds) of beef.
The company is also gaining some pretty powerful buddies to help them on their way. They’ve been in talks with Google, Bill Gates, and numerous venture-capital firms. Hardly surprising, when you pair the lucrative $88 billion (£57 billion) American beef market with the drastic need to address the environmental concerns of industrial farming. So far, Impossible Foods has wrangled more than $150 million (£100 million) from investors.