One of the things that annoys us most in the gym is guys who perform reps incorrectly. Swinging weights, using momentum, partial reps are all bad. But one of the most common ways people screw up is by performing the negative phase of the rep incorrectly. To clarify, the positive portion of the weight is when you are contracting the muscle – for example, when you are pushing the bar away from your chest when bench pressing, or pulling yourself upward during a chin-up.

For some reason, guys think that the only part of the rep that matters is the positive. The assumption is that once you have made it to the top of the rep, you can simply let the weight drop back down to the starting position. So why is this such a problem? Because you are only doing half the rep! Once you reach the top of the movement you are not finished with the rep, you are only halfway done. The negative portion of the rep, or lowering the weight back down, should be done slowly and under control. In fact, the positive portion of the rep should be done faster than the negative portion. 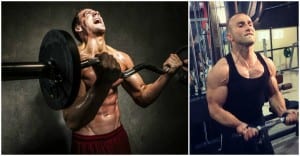 The Three Parts of the Rep

Ok, we lied (sort of). There are actually three parts to the rep, the positive, negative and static. Static being holding the weight in place. For example, when you bench press, when you are holding the weight above you with straight arms, preparing to lower it to your chest – that’s the static portion.

So now that we know all three parts of the rep – positive, negative and static let’s talk about each individual phase. The positive portion is the hardest part – it requires the most strength and is usually the part we need help with when working with a spotter (those last few reps). The static portion is the second hardest. Although we aren’t actually lifting the weight during the static portion we still have to hold it up and make sure it doesn’t come crashing down on us. Finally there’s the negative portion which is the easiest. In this case you are simply lowering the weight but in a controlled manner. Even when we are too tired to perform another rep we usually have the strength to hold the weight up for a bit longer or at the very least lower it in a controlled manner.

How to Use the Negative Portion to Help You

Since the negative portion of the rep is the easiest you are essentially strongest while doing it. That means you can handle the most weight when you are lowering it. Bench pressing 225 might be more than you can handle, but holding it up in the air and lowering it slowly might be within your strength. This is why negatives are one of the most popular ways to build the strength to do a pull-up. While you might lack the back and arm strength to pull your body up you almost certainly have enough to lower yourself down slowly a few times.

Negatives help you train in two ways. First, they help you get used to a weight. Your grip strength will adapt to the weight and psychologically you will get used to moving it. Many guys are surprised to find that after training negatives for a couple weeks they are all of a sudden able to perform a few full reps at that same weight. Your mind isn’t signaling to your body that “that weight is too heavy”, it’s now saying “we can handle that”. If you have plateaued in a particular exercise try doing some negatives at a higher weight and see if that helps.

Second, negatives allow you to fully exhaust the muscle. As mentioned earlier, the positive portion of the rep is the hardest. A lot of guys like training to failure on some sets. While this is a great way to shock the muscles and encourage growth, if you are only training to positive-portion failure, you aren’t training to full failure. This was a popular training technique of former Mr. Olympia Winner Dorian Yates. He would push himself to do a few forced reps with slow, controlled negatives. Once his muscles were unable to perform even one more controlled negative he knew he had taken himself to true failure. Given how many Mr. Olympia Titles he’s won, he obviously knows a thing or two. 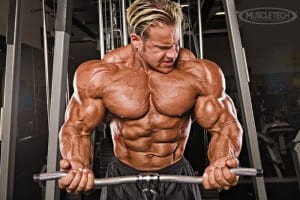 Training negatives can actually be a bit dangerous. You are usually handling a weight that is very heavy which increases your chance of injury. Make sure every negative is slow and controlled. Also, don’t overdo it as performing too many negatives can result in overtraining. If you are doing a set of negatives, stick to 4 or 5 max. If you are adding a few negatives at the end of your set to take your muscle to failure, only a few of them should be necessary.

In terms of exercise selection, negatives work well on the bench press (only with a spotter please!), curls, pull-ups and rows. Make sure you have someone there to help you get the weight back to the top of the rep so you don’t have to use momentum or swing the weight which would put you at risk of injury.

When you take your muscles to failure, or train them with weights that are higher than they are used to, the body responds by producing more testosterone. This is very important because, as we know, testosterone levels are directly correlated with muscle growth. In other words, if you have high t-levels, you will also be more likely to have higher levels of muscle mass.

While negatives are definitely an effective way to boost testosterone, you want to make sure you are doing everything you can to help your body produce more. One of the best ways of doing that is taking a high-quality testosterone booster. These products use natural ingredients that are scientifically proven to boost testosterone production. When combined with a solid diet and training program you will see all the benefits of being a high-testosterone male. That means higher energy levels, more confidence, bigger muscles and less body fat. Click here to check out our dedicated testosterone booster page. It outlines what you should be looking for in terms of ingredients and even makes some suggestions on the best products currently available on the market.