This article and the video attached at the bottom are only for educational purposes. Broscience.com does not support the use of illegal substances and advises you to only take medications as prescribed by your doctor.

Nowadays, more and more people tend to rely on exogenous substances, in order to achieve their goals.

And that is probably why people want to break the barriers and go further.

For today’s article, we will enlighten you on one of the most popular performance enhancing drugs- Trenbolone.

So, without further ado, let’s get familiar with this steroid’s effects and side effects. 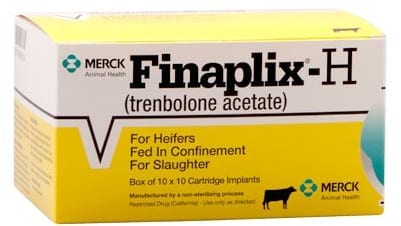 Scientifically, this drug is in the “Nandrolone” group.

There are 3 types of this drug –

Originally, trenbolone was used as an intramuscular injection.

In 1987 however, it transitioned to the so-called “Finaplix-H” pellets.

Trenbolone acetate was used for veterinary purposes only back then.

These pellets were used to feed cattles.

But why were they feeding steroids to cows?

You guessed it- It increased the animals’ muscle mass.

Funny as it sounds, that was trenbolone acetate’s initial purpose.

There were no intentions for giving it to humans.

Alright we know that for those of you who are not science junkies, this name sounds like a spell from Harry Potter.

But no worries, we can refer to it as HHBC.

HHBC was specifically designed for human use.

For those of you who don’t know it yet- Steroids were originally medically administered to people with various diseases.

Such were cachexia, osteoporosis and severe muscle loss.

HHBC however was taken off of the market in 1997.

This is an interesting one. Trenbolone enanthate was never on the market, however it came to the so-called “Black market”.

The manufacturer was the famous “British Dragon”, who marketed the drug under the name of “Trenabol”.

“This drug was massively strong. It produces a credible muscle size and strength.”

HHBC and trenbolone enanthate are referred to as long-acting esters, compared to the acetate, which is a short-acting ester.

Esters are basically compounds made by replacing the hydrogen of an acid, but we’ll not get too scientific.

So, without further ado, let’s get familiar with the side effects.

Having big, defined and vascular muscles that defy the natural human limits may feel good.

However, when you get outside of the natural human patterns and use exogenous substances, things change.

Steroids like trenbolone may make you feel like a king for some time, but they certainly come with side effects.

So, let’s talk about those, as they are the biggest problem of steroid use.

Again, without getting into any complex terminology- Estrogen is the primary sex hormone.

Estrogen regulates and plays a part in the function and development of the female reproductive system, as well as secondary sex characteristics.

The thing with trenbolone here is that it literally makes men lactate.

Due to the many side effects, people tend to combine trenbolone with other drugs.

These other drugs, called “blockers”, have the sole purpose of decreasing side effects.

However, you should be well aware that you basically get a mix of substances into your body.

And that is exactly why side effects are common, besides the effort put behind minimizing them.

Now, we cleared out the term “Estrogenic”. Now we have the exact opposite- Androgenic.

An androgen is any steroid hormone that regulates the development of primary and secondary male characteristics.

When you give such a boost to a biological system, it is completely normal for side effects to occur.

In this case, the androgenic side effects are acne, bolding, and even hair loss.

But thing is, those are just the tip of the iceberg. It gets much worse.

“This drug will make you hypersexual. It gets into your central nervous system to that limbic area. It gets into the area that makes a man sexual and makes them hypersexual. And the bottom line is, coming off of trenbolone is debilitating. I have patients that are suicidal, because they can’t have sex.”

Alright, not being able to have sex may be bad, but it gets worse.

According to The Anabolic doc, this drug is devastating to your lipid profile and your heart.

Shortly, the lipid profile consists of lipids such as cholesterol and triglycerides.

Abnormalities in your lipid profile have direct side effects on the endothelial tissue, in the inside of your coronary artery.

“If testosterone and other androgenic drugs cause muscle hypertrophy (growth), then trenbolone can massively cause Left ventricular hypertrophy. Please pay attention to this. There are also side effects similarly in the prostate.”

If you’ve ever heard the term “Roid rage”, well, this drug is going to cause it.

On top of that, you’re going to sweat like crazy, due to tren’s effects on the thermal receptors.

“A man this week said to me: ‘Doctor, frankly, I was violent.’ That’s the exact word he used, violent.”

Check out the video below, where The Anabolic doc himself explains everything in great detail.