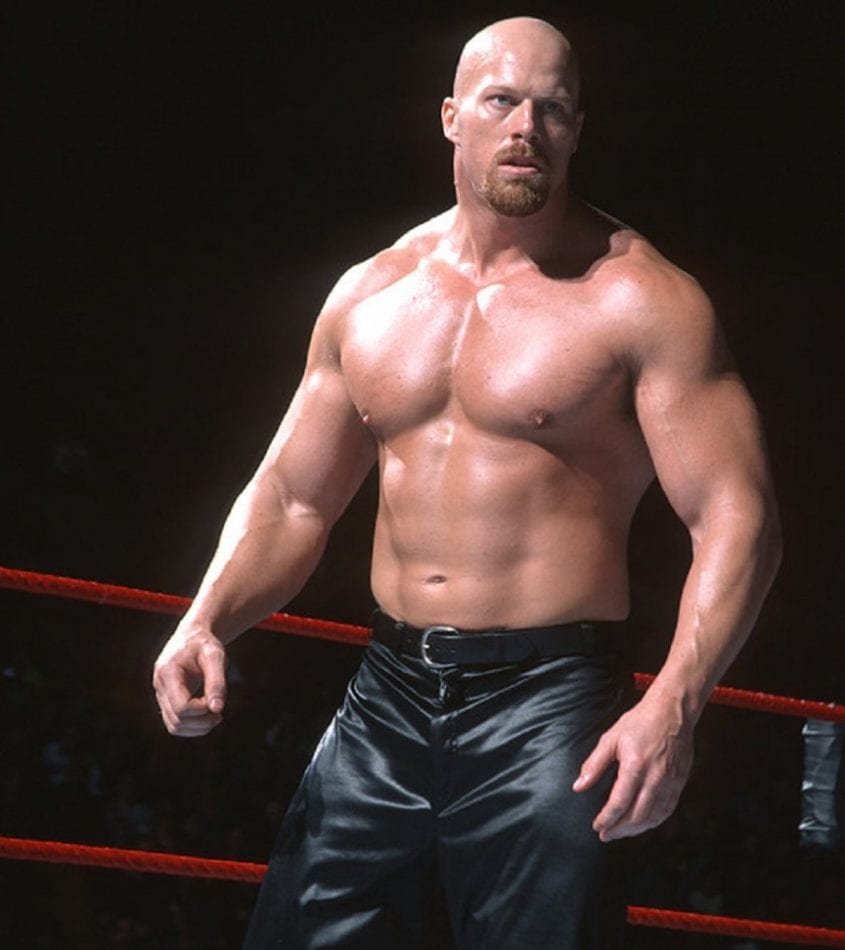 A collective “who” was just let out after reading this name, which is understandable, since he was with the WWE for only about a year. Before the WWE, he won the 1996 “World Strong Man” competition and engaged in Mixed Martial Arts, one time, losing in the first round.

Jones stood at a mammoth 6’10”/320 pounds, which is the biggest on this list. His time with the WWE was fairly uneventful, as Jones needed a lot of training in the ring. Jones eventually quit the WWE in 2003, due to the constant travel demands, heading back to Australia where he’s been able to carve out some acting gigs. 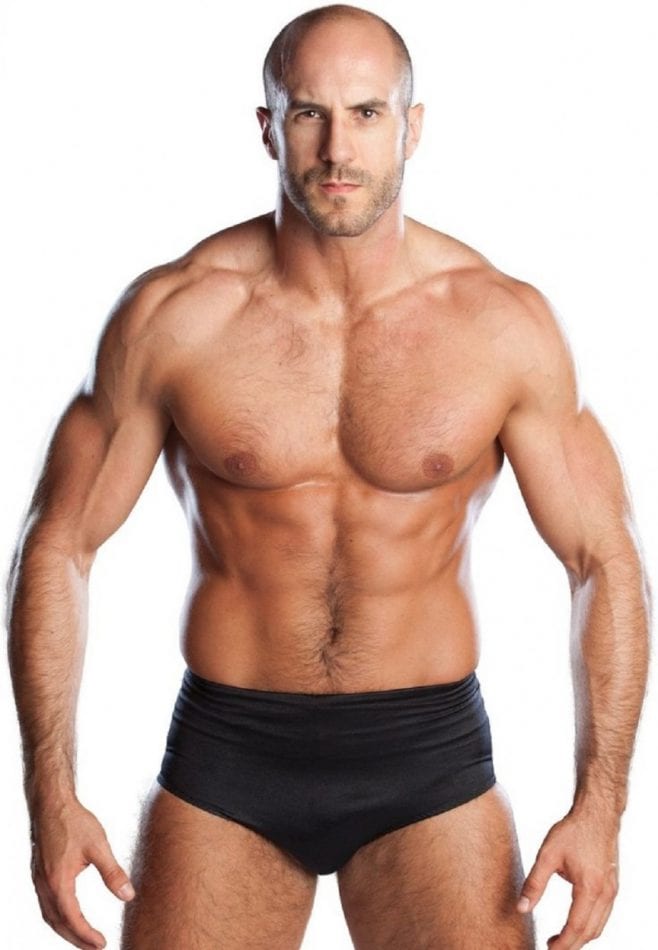 Compared to many of the people on this list, Cesaro might not looked jacked in the traditional sense, but is easily pound-for-pound the strongest guy in the WWE, right up there with John Cena and Brock Lesnar.

At 6’5”, he’s one of the taller wrestlers on the list with a moveset that requires a ridiculous amount of strength on his part. Some of his moves include the Neutralizer, Cesaro Swing, and Dead-Plex (basically dead-lifting his opponent from the apron, over the ropes, and to the mat. An elite ring talent that for whatever reason, the WWE has left muddling around in the mid-card for entirely too long. 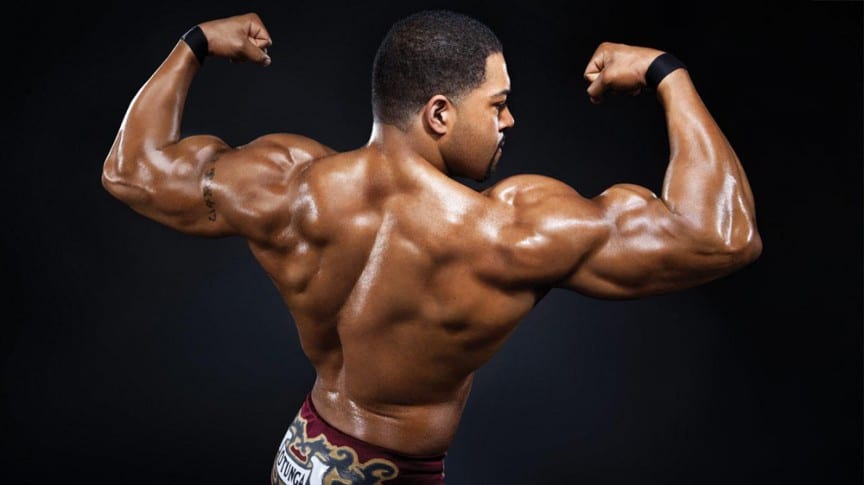 As Lloyd Christmas from Dumb and Dumb once said; “he must work out”. Yeah, Otunga is in stupid good condition, which paired with his relationship with singer Jennifer Hudson, and having a law degree from Harvard, made for an easy hire by the WWE.

Not over thinking things, WWE gave him a lawyer gimmick, which unfortunately didn’t last that long as Otuna’s days in the ring seem far and few between these days. Presently, he co-hosts Raw’s Pre-Show on the WWE Network. Otunga was the runner-up to the first season of NXT, and was involved in one of WWE’s better Raw segments, when the Nexus debuted, destroying literally everything in and outside of the ring. 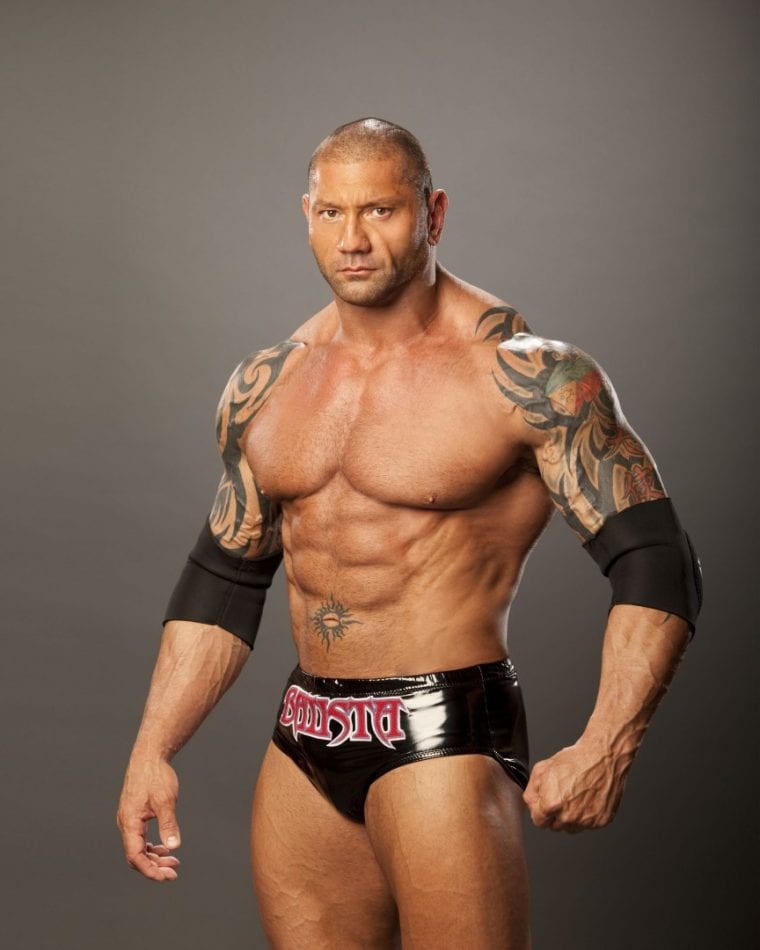 You may be noticing a trend here, but Batista first got into bodybuilding, and decided to try out for wrestling, initially for WCW (which he was told he would never make it), and then for the WWE, where he made it.

At 6’6” and 278 lbs. the picture above doesn’t even show Batista at his peak size, when he was in development for the WWE, he was known as Leviathan, which was a perfect name for Batista’s menacing look. After winning 6 world titles with the WWE, Batista has taken his talents to the big screen (Spectre andGuardians of the Galaxy), which to no big surprise, he’s succeeded at. 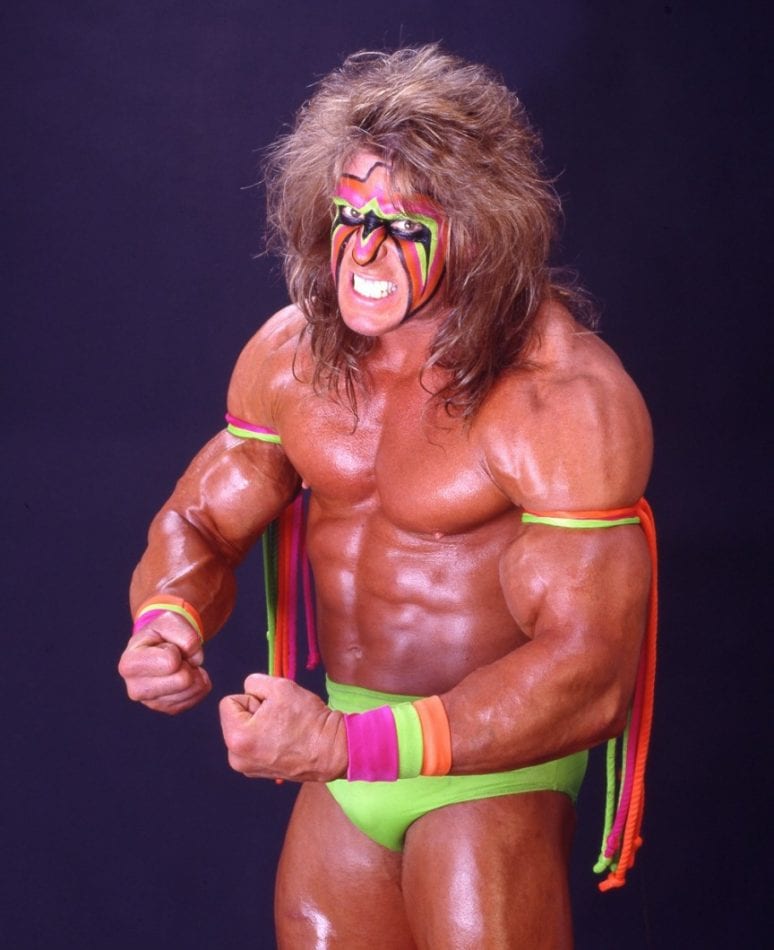 One of WWE’s most popular and widely known talents, the Warrior had an impressive physique that rivaled basically everyone during his era. Warrior joined up with the WWE in 1987, instantly becoming a favorite thanks to his incredibly high energy, which involved running to the ring, and shaking the ropes like a mad man.

Warrior’s biggest match was a “champion vs. champion” match at WrestleMania VI against Hulk Hogan, which he won, and is still a match talked about today. Warrior was finally inducted in the WWE Hall of Fame in 2014, but only days later passed away due to a heart attack, he was 54. 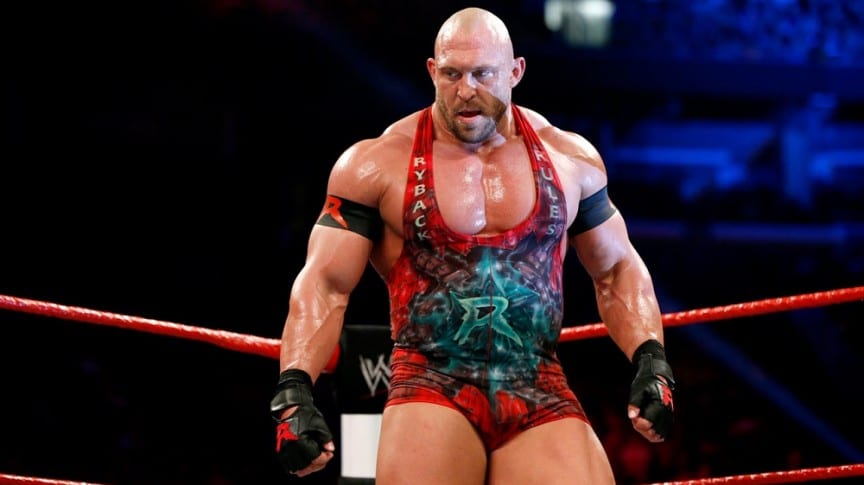 Ryback is in fantastic shape, and is definitely one of the more jacked wrestlers currently on WWE’s roster. Initially, he tried out for Tough Enough back in 2004, but didn’t win the competition. WWE felt there was something in Ryback worth looking at, and gave him a second chance by bringing him to Ohio Valley Wrestling to develop as a WWE wrestler.

Ryback was finally brought up to the main roster as a member of The Nexus in 2010, eventually moving toward his “Feed Me More!” gimmick that we see today. Most recently, he won the Intercontinental title, and had a pretty average run, before losing it to Kevin Owens, someone who is not considered to be jacked, but is definitely more talented, sorry, just had to get that jab in there, not a Ryback fan. 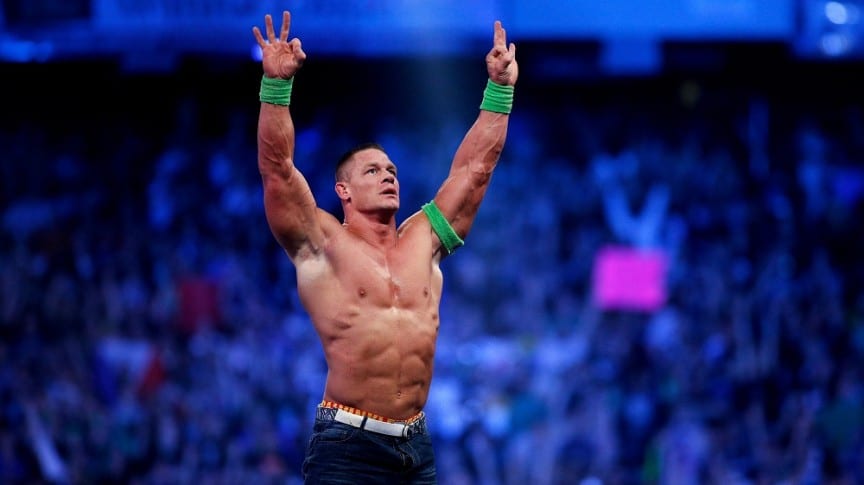 Cena has been known to show off his strength on multiple occasions, giving his finisher, the Attitude Adjustment to giants like Big Show and Great Khali, heck he’s even done it with two guys stacked on his shoulders! If you follow Cena on social media, he regularly posts videos of him lifting insane amounts of weights, so fair to say, this guy is jacked.

Starting with the WWE back in 2001, Cena has become the face of the company, a 16-time world champion; he has become one of their biggest crossover stars, constantly doing media appearances for just about everything. At 38, 2015 has been one of Cena’s finest years in the ring as the U.S. Champion; Cena has put on a string of high quality matches worth checking out. 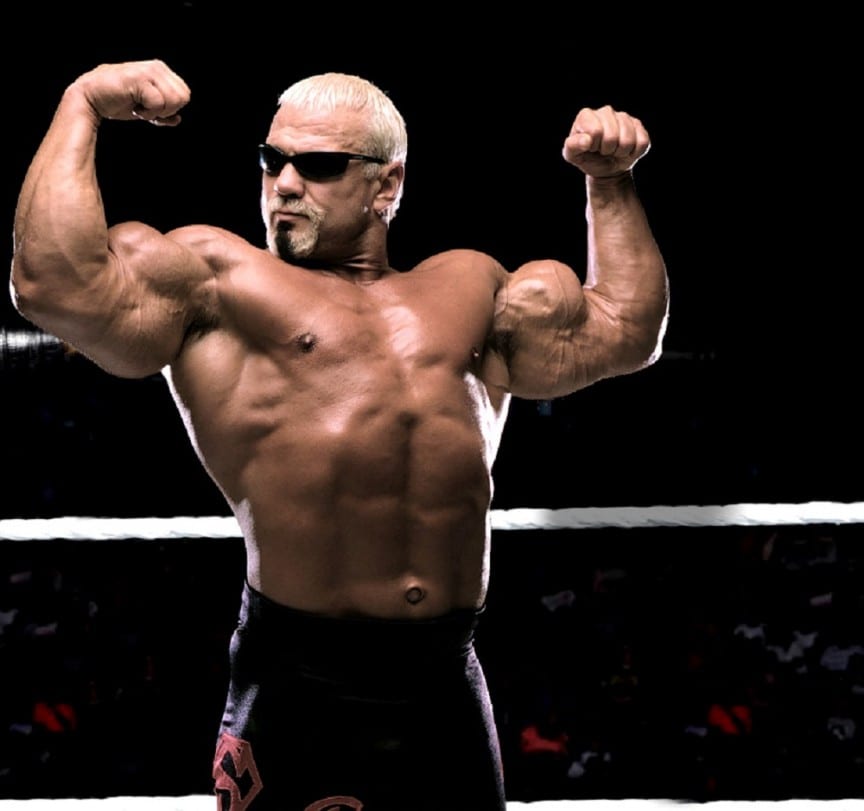 “Holla, if you hear me!” That’s right ladies and gentleman, “The Big, Bad, Booty Daddy” comes in at #3, for being not only jacked, but kind of weird looking. Aptly nicknamed “The Genetic Freak”, Steiner has always been in great shape thanks to his amateur wrestling background, it was in more recent years where his time in the gym really seemed to go up.

Just look at his arms, it’s like his muscles, have muscles! Some may argue his look it too mutant-like, and shouldn’t be on this list, but it’s tough to deny that “Big Poppa Pump” wasn’t one of the bigger competitors in the WWE. 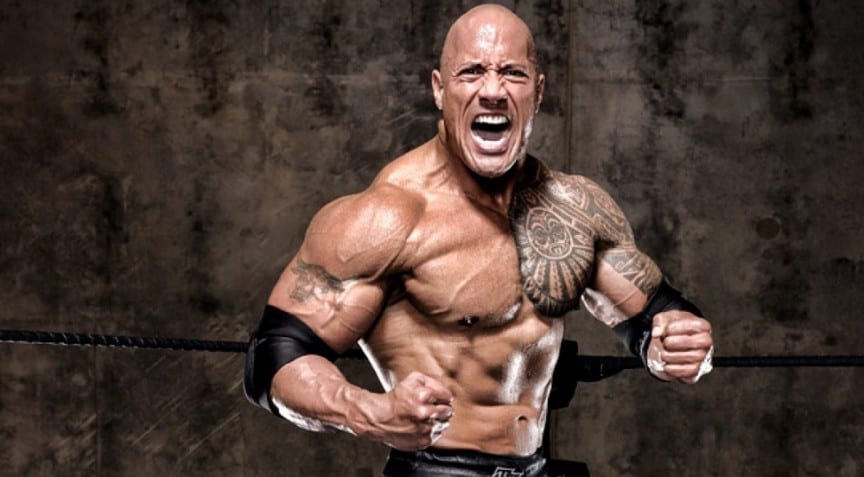 Breaking into the WWE as Rocky Maivia, a smiley babyface, that crowds absolutely hated, with their “Die! Rocky! Die!” chants at every appearance. A heel turn was inevitable, which unleashed The Rock, a cocky loud-mouth that was ridiculously talented on the mic and extremely underrated in the ring.

Rock has always been in good shape, but it wasn’t until more recent years where he really got going in the gym, getting crazy huge at times (sometimes for movies). If you follow Rock on social media, he usually shows a bunch of weight training photos with motivational quotes; the guy is nonstop and makes everyone else look so lazy! 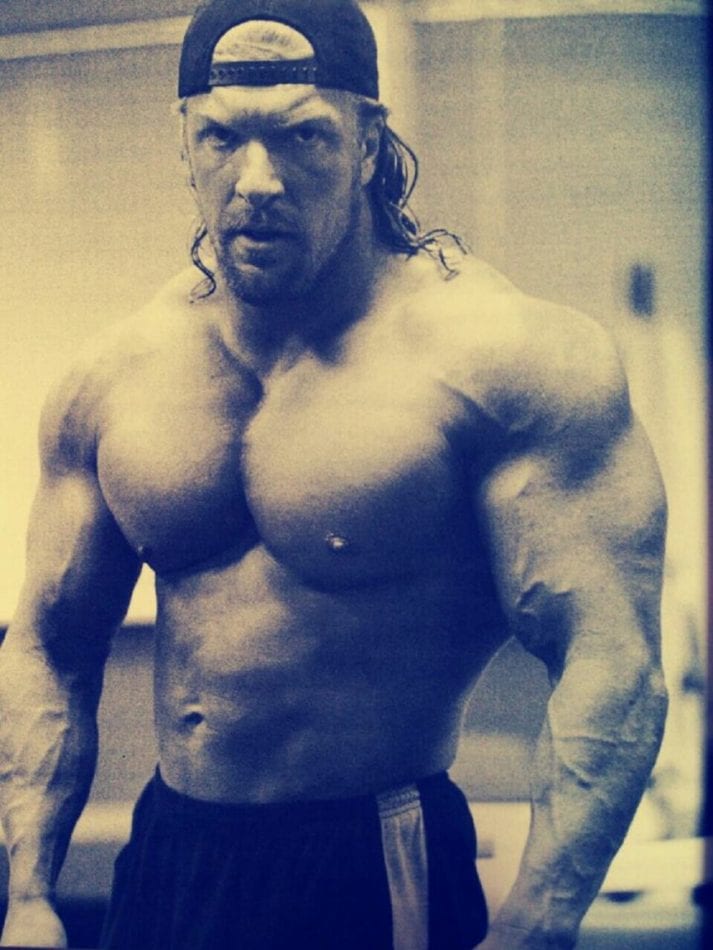 Topping off the list is a guy who went absolutely nuts in the gym after he had a terrible injury tearing his left quadriceps muscle that kept him out of action for eight months. Triple H has always been in good wrestling shape, so when he needed eight months to recover, all of that time went towards rehabilitation and working-out.

When he finally returned, the guy was huge! Fans still today talk about how insanely jacked he looked during that time period. Although he is semi-retired today, Triple H still constantly hits the gym, just in case he even needs to jump back in the ring. That non-stop commitment is a big reason why he lands at number one!

2 thoughts on “Top 10 Most Jacked WWE Stars, Number 1 Is Probably Not Who You Think”