Why not go a bit off topic once in a while. I think that we as bro’s can all enjoy these sick cars! Am I right? 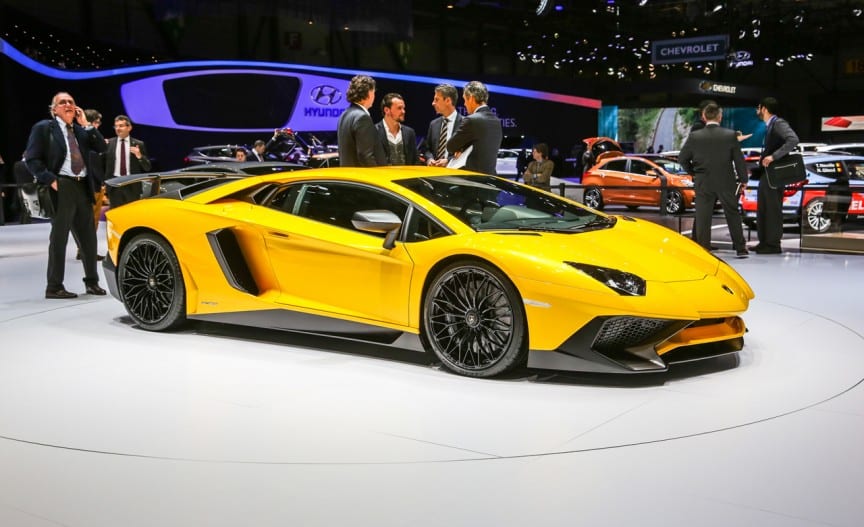 Just like the Regera, the Lamborghini LP750-4 Superveloce was unveiled at the 2015 Geneva Motor Show. Compared to its predecessor, the Aventador SV features innovative technologies, lower weight, and enhanced aerodynamics. It is powered by a 6.5 liter, naturally aspirated V12 engine that produces 750 horsepower. This helps it accelerate from 0 to 100 km/h in only 2.8 seconds. Stephan Winkelmann, Lamborghini’s President states, “The new Aventador Superveloce continues the Lamborghini tradition of SV models, pushing the boundaries in terms of performance and pure driving emotion.” Its interior is also spectacular. It is the first car to feature the unique Lamborghini’s innovative Carbon Skin material. 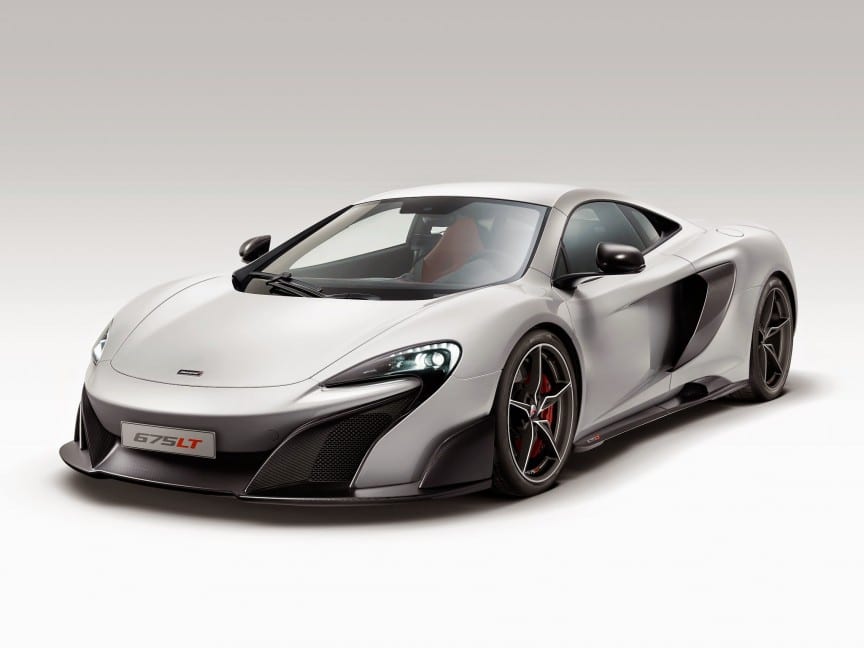 The McLaren 675LT, which comes as a Coupé only, is powered by a 3.8-litre V8 engine that makes the car accelerate from 0-100 km/h in just 2.9 seconds. The car can also accelerate to 200 km/h in just under 8 seconds and can reach a top speed of 330 km/h (205 mph). Its weight has also been considerably lowered to enhance its levels of power, torque and drive-ability. The car now features efficient turbos, exhaust manifold design changes, an innovative camshaft, and a rapid fuel pump system. It comes in five unique colors specially coded for the 675LT. These include Chicane Grey, Delta Red, Silica White, Napier Green and the popular McLaren Orange. 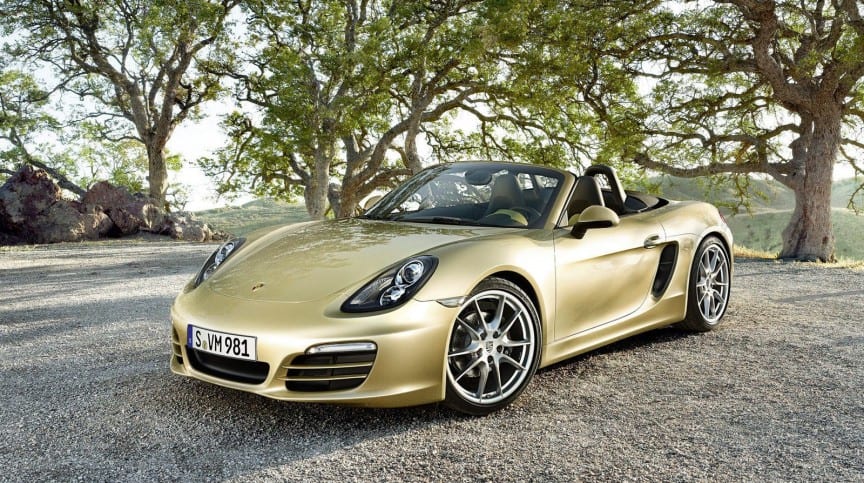 The 2016 Porsche Boxter Spyder made its debut at the 2015 New York International Auto Show. This supercar retains ‘traditional’ ways with a manual transmission and a fabric roof that is made by hand. However, the Boxter still has contemporary performance features that include a rigid sports suspension, direct steering, and stylistic design elements. It is powered by a 3.8-liter V6 engine that produces 375 horsepower. This helps it accelerate from 0 to 100 km/h in just 4.5 seconds. Prices for the car start at $82,100. Porsche also has other supercars such as the Porsche Cayman GT4 and the Porsche 911 Targa 4 GTS. 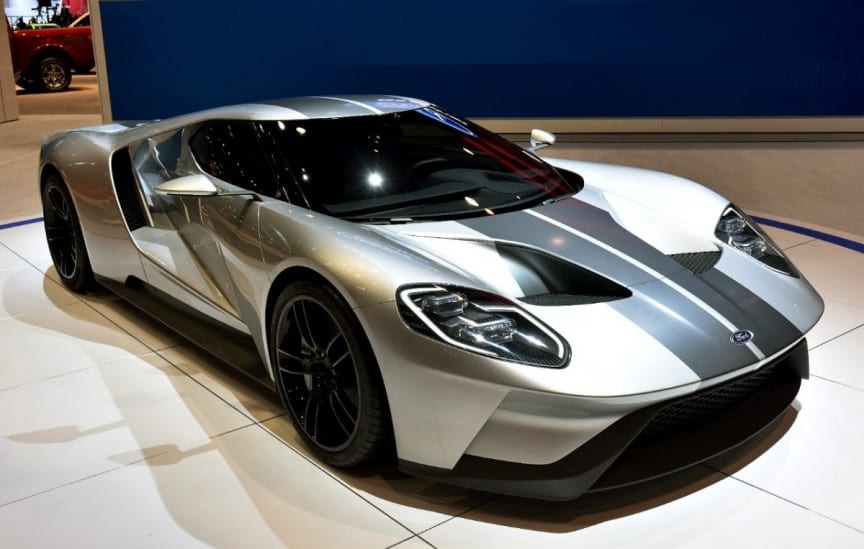 The 2016 Ford GT is nothing short of gorgeous. It is one of the more than 20 performance cars set to be released by the company by 2020. Its production will coincide with Ford’s celebration of its 50th anniversary of Ford GT racecars that placed position one through three at the 1966 24 Hours of Le Mans. The car will be powered by a 3.5 litre twin-turbocharged V6 engine which will produce in excess of 600 horsepower and allow it to accelerate from 0 to 100 km/h in approximately three seconds. In an interview, Ford officials said, “The GT will exhibit one of the best power-to-weight ratios of any production car.” 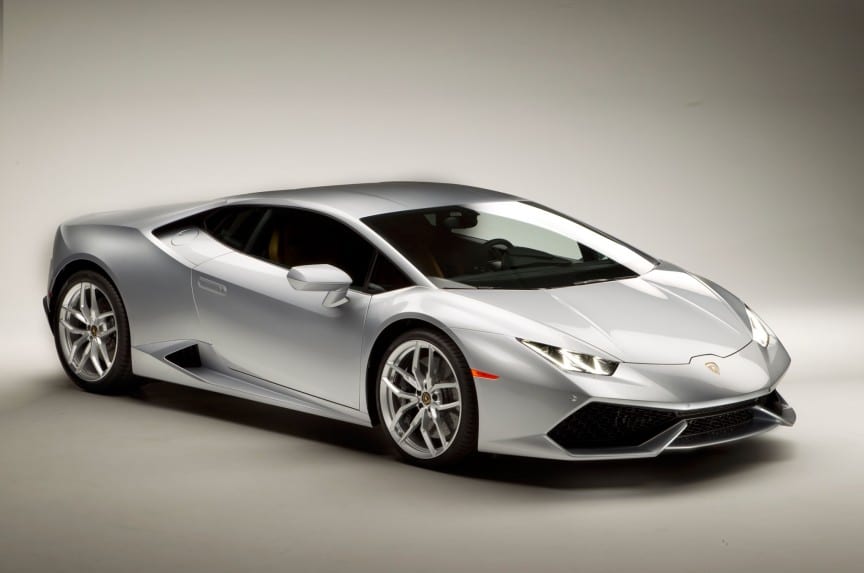 The Gallardo is gone, and Huracan is here to replace it. Huracan is a Spanish name that loosely translates to hurricane. The car made its first appearance at the 2014 Geneva Auto Show, and it is quite distinct from its predecessor. Examples of features that have been modified include full LED illumination, Alcantara interior upholstery, a full-colour TFT instrument panel, a redesigned dashboard, and engine Stop & Start technology. A 5-liter V10 engine that produces an impressive 610 horsepower helps it do 0 to 100 km/h in just 3.2 seconds. The CEO of Lamborghini says, “With the Huracán, Lamborghini is writing the next chapter in its great history.” 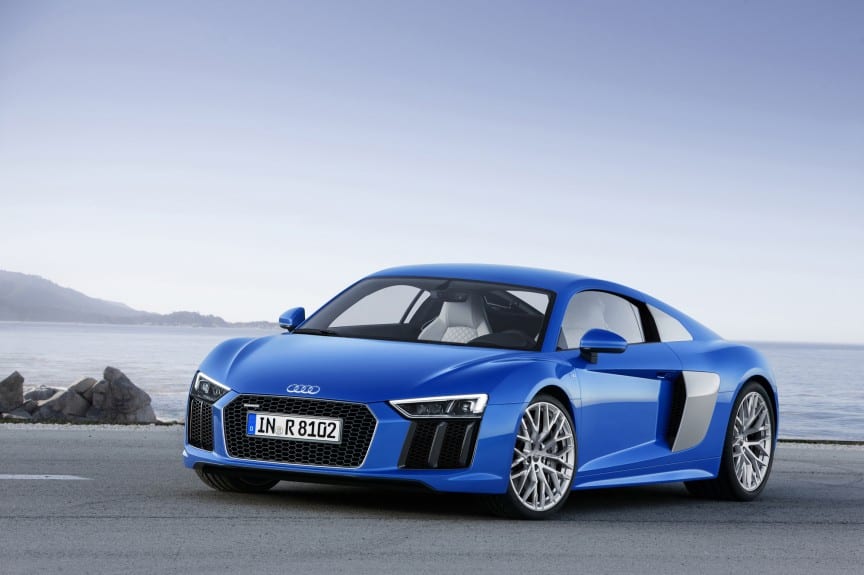 Since inception, the Audi R8 has always been striking. That was maintained at the 2015 Geneva Motor Show when Audi unveiled its 2016 Audi R8 V10. The car is dazzling. It is powered by a V10 engine that can accelerate from 0 to 100 km/h in just 3.2 seconds. Just like the McLaren 675 LT, the R8 V10 has a top speed of 330 km/h (205 mph). The car promises to be impressive on both the race track and the road. Head of development at Audi says, “With the new Audi R8, our engineers are bringing accumulated racing expertise from the race track onto the road. No other model of ours evokes more dynamic emotion.” 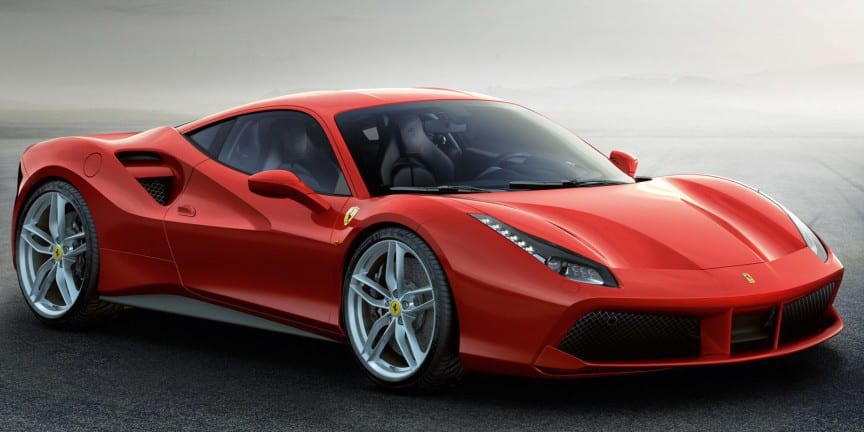 The Ferrari 488 GTB was launched on 3 February 2015, and is one of the most stunning supercars you will ever set your eyes on. It is set to be the replacement of its equally beautiful predecessor, the Ferrari 458. A sizeable 3.9-litre engine that produces a whopping 661 horsepower powers it. It is equipped with an automatic dual-clutch 7-speed F1 gearbox, carbon-ceramic brakes, a twin-turbocharged V8 engine, and can accelerate from 0 to 200 km/h in 8.3 seconds. Additionally, it can achieve a top speed in excess of 330 km/h (205 mph). Its intelligent gear system features Variable Torque Management, which helps effortlessly unleash the engine’s colossal torque. 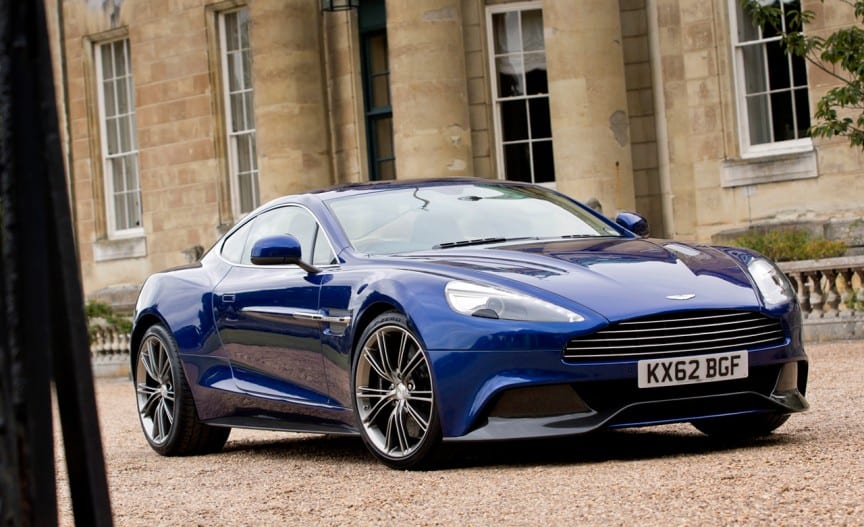 The 2015 Aston Martin Vanquish is equipped with a new V12 engine making it the most powerful GT production engine in the history of Aston Martin. The engine produces a whopping 568 horsepower and helps this ultra-luxurious supercar accelerate from 0 to 100 km/h in just 3.6 seconds. It is so awesome that Aston Martin does not call it a grand tourer, but a ‘Super Grand Tourer’. The Vanquish is also equipped with an enhanced eight-speed automatic transmission. Its body is curved from aerospace engineered carbon-fiber which gives it exceptional rigidity and finely honed agility. This epic car also features a state-of-the-art infotainment system with buttons that feature ‘haptic feedback’. 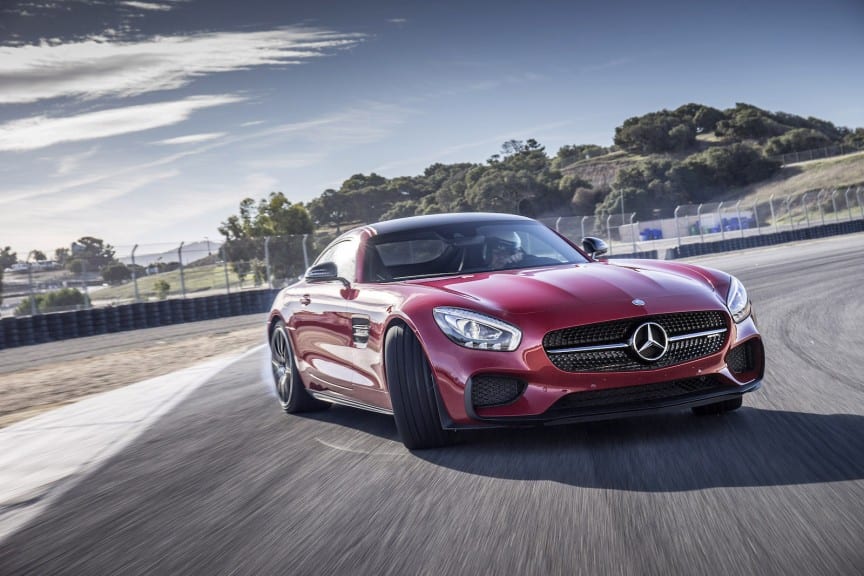 The Mercedes Benz AMG GT S is the second supercar to be developed from the ground up by the company after the SLS AMG. It features excellent driving dynamics, thoroughbred motorsport technology, and chic styling. It is powered by a 4.0-litre V8 biturbo engine that produces an imposing 503 horsepower. It has a top speed of 310 km/h and can accelerate from 0 to 100 km/h in just 3.8 seconds. The car’s practicability and comfort is also noteworthy. It is equipped with an easily reachable luggage compartment as well as high levels of comfort on long journeys. Prices start at $129,900. 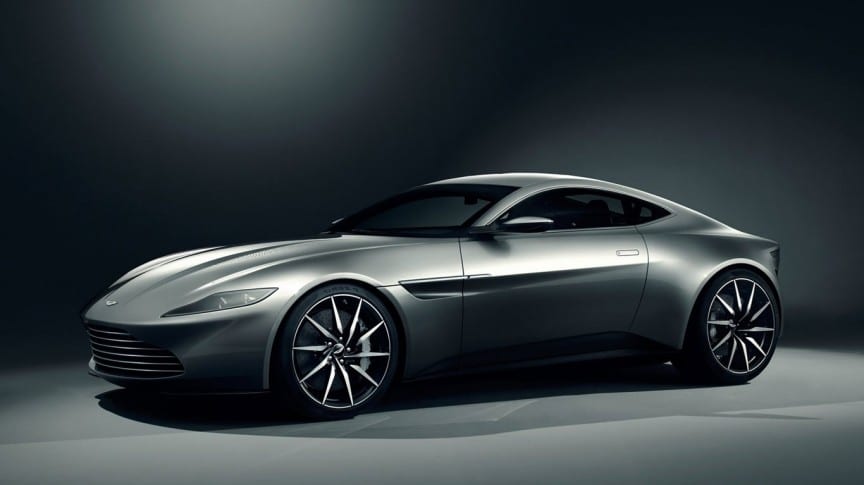 Starting us off is the well-appointed Aston Martin designed for the new James Bond movie, Spectre. This luxurious car was unveiled to the public on 4 December 2014 by Sam Mendes and Barbara Broccoli, the directors of the action-packed movie. The car is a two-door coupe grand tourer. It will continue Aston Martin’s longstanding tradition as the starring car in the upcoming James Bond 007 movie. The DB10 was built specifically for Spectre, and only 10 units will be made. Aston Martin’s officials stated, “The DB10 gives a glimpse to the future design direction for the next generation of Aston Martins.”

The Female Bodybuilder Who Often Times Gets Mistaken For A Man