Looking big and strong definitely gives you confidence and makes you feel kind of, superior in a sense.

Some people develop body dysmorphia, which is the exact opposite of anorexia.

The dysmorphia that dictates “You’re never big enough, get bigger!”, leads people to the use of performance enhancing drugs.

At one point however, even the steroids are not enough and people start doing stupid things.

Such as… Injecting synthol in their arms.

The prime examples of synthol users are two famous dudes – The Russian “Kirill Tereshin” and the Brazilian “Romario”, whom we talked about in another article.

These two guys are obsessed with injecting synthol in their biceps and triceps, as well as the whole upper body.

Some people even suggest it is not synthol, but actual cooking oil, or vegetable oil.

The premise behind those injections is enhancing the appearance of their muscles.

Recently, Kirill appeared on a TV show, alongside his Brazilian lookalike Romario, who’s doing pretty much the same as Kirill, but on a larger scale.

Besides the biceps and triceps, Romario injects his chest, traps and deltoids.

The funny thing is media is giving these guys publicity, which is exactly what they want. 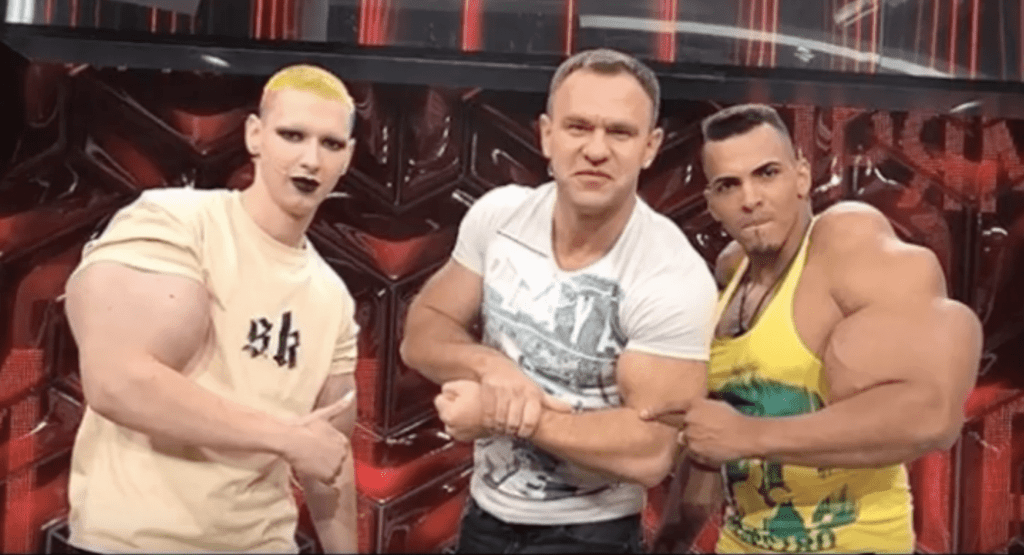 As you can see, Kirill (Far left) is not just injecting his arms with oil, but is also dyeing his hair and wearing make up.

He is pretty much the prime example of a so-called “Attention seeker”, he is starving for attention.

Needless to say, it is way beyond looking big at this point.

The idea of bodybuilding

People in the fitness community make videos and articles about these ‘synthol freaks’, simply because they are the perfect example of what NOT to do.

Romario and Kirill just took the idea of bodybuilding and completely twisted it upside down.

Instead, they allowed their obsession to take over and injected oil, straight into their bodies, to create these giant tumors in their limbs.

Furthermore, Kirill also does unthinkable thinks, just for the sake of getting a little more attention.

Apparently, he posted a photo of his supposedly amputated arm, which in fact, turned out to be fake.

He did it on purpose to gain more publicity and compassion.

Let us know in the comments below what your thoughts are on injecting oil into your body and don’t forget to check out the video below to see these ‘freaks of nature’!