Lou Ferrigno, Arnold Schwarzenegger and Reg Park—all superstars in bodybuilding—yet each one was inspired by the legendary Steve Reeves.

His perfectly symmetrical physique still amazes people to this day. Yet, his training methods and diet were far removed from what is now considered typical.

Here’s the whole undiluted truth about his life and career.

To leave the tragic memories behind, Steve and his mother moved to Oakland, California.

During his school years, a fellow pupil, Joe Gambino, challenged the tall-framed Steve Reeves to an arm-wrestling match. Reeves was shocked when this much smaller guy defeated him easily.

This event played on Steve Reeves’ mind. He was determined to discover how this embarrassment occurred. So, he went round to Joe Gambino’s house to find the answer.

He found Joe working out in the garden. The inquisitive Steve Reeves questioned him about training and explained he wanted to gain the same strength. Joe struck a deal—Steve could use his weights, but only if he paid him a dollar for every workout.

He agreed, and the Steve Reeves bodybuilder was born.

Steve Reeves joined the army during World War 2. Despite being stationed in hostile territories, such as the Philippines and Japan—he continued to train. His contemporaries report that he made his own free weights and pulley equipment.

In 1946, Steve Reeves returned to the USA and began working out at Ed Yarick’s Gym. He entered his first competition after just a few months of intense training—winning the Mr. Pacific Coast title.

In 1948, Steve Reeves entered the most prestigious competition of that time—Mr. Universe. However, he was pushed into second place behind the incredible 38-year-old John Grimek.

“When Steve Reeves competed at Mr. Universe, to my mind, he was superb. The man had everything. Looks, physique, skin, hair, and teeth—all perfect. There was the physique of the century…a wonderful, god-given combination of grace, power, size, definition.”

After just four years of competing (1946-1950), Steve Reeves retired from bodybuilding contests. One year before his Mr. Universe win in 1949, he had been contacted by a casting agent who suggested he could have a career on screen—if he could act.

Steve Reeves studied at the Theodora Irvin School of the Theatre. As a natural, it wasn’t long before he’d secured TV work—including Kimbar of the Jungle (1949), Stars Over Hollywood (1951) and Hollywood Opening Night (1952).2

However, it was the Italian cinema industry that made Steve Reeves into a movie icon. The non-Hollywood movies Hercules (1958) and Hercules Unchained (1959) were highly successful. This was despite the fact that his voice was dubbed into Italian.

His acting career lasted until 1968. During this time, he had taken on the roles of Sandokan and Goliath. As the 1960s were drawing to a close, the previous Hercules Steve Reeves had earned enough money to retire to live on a ranch in Oregon.

This was due to two reasons. Firstly, he suffered an awful shoulder dislocation during the filming of The Last Days Of Pompeii (1959). Steve Reeves found that the physical challenges he faced in later movies aggravated this previous injury—and was in frequent pain.

Outside of the silver screen, he pursued other interests. He published three books, Powerwalking, Building the Classic Physique-The Natural Way and Dynamic Muscle Building. Furthermore, he promoted synthetic-free bodybuilding and had a successful business breeding horses on his ranch.

On the 1st of May, 2000, Steve Reeves died from complications relating to lymphoma. He was survived by his third wife, Deborah Ann Engelhorn. 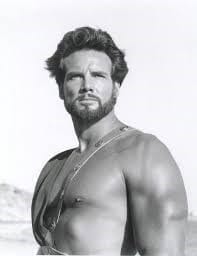 The Steve Reeves workout has two main elements—a high number of daily exercises while only resistance training three times per week. He considered this the optimum way to build muscle—allowing his body adequate time to recover.

Here’s a typical Steve Reeves bodybuilding workout. Take a break for 45 seconds between sets, and have a two-minute rest after each exercise.

Take a look at Steve Reeves lifting on the beach: 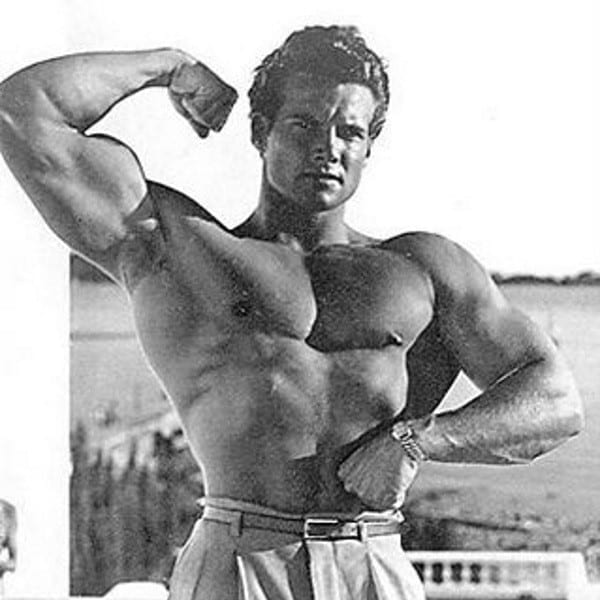 To the modern bodybuilder, the Steve Reeves diet will appear quite unusual.

Instead of the constant eating plan of six or seven meals followed by the behemoths today—the more compact Steve Reeves ate just three times per day.

Additionally, his macros tended to be a 60-20-20 breakdown, respectively, carbs, fats and protein. This high carb vs. low protein diet would be considered foolhardy by today’s standards—yet for Steve Reeves, it worked.

Take a look at how this simple diet led to an amazing physique:

Was Steve Reeves on Steroids?

Throughout his career, Steve Reeves said he was natural and campaigned against steroids in bodybuilding. He said,

“I don’t believe in bodybuilders using steroids. If a man doesn’t have enough male hormones in his system to create, a nice hard, muscular body, he should take up ping pong.”

He was against the way the Classic physique of his era turned into the mammoth size of the 1990s, saying,

“When your arms are bigger than your head, something is wrong.”

It’s true that he didn’t exhibit the mass bulk of today’s apparent juicers. He was proportionate, symmetrical and without any excessive cannonballs or lats. However, neither did Schwarzenegger, and he’s admitted to synthetic use.

“Everybody in the old days used them: Zane, Columbu, myself, Arnold, Larry Scott, Harold Poole, Dave Draper, and even Steve Reeves. There’s no way to deny it.”

But, as there is no actual evidence apart from hearsay—his steroid use cannot be proven. 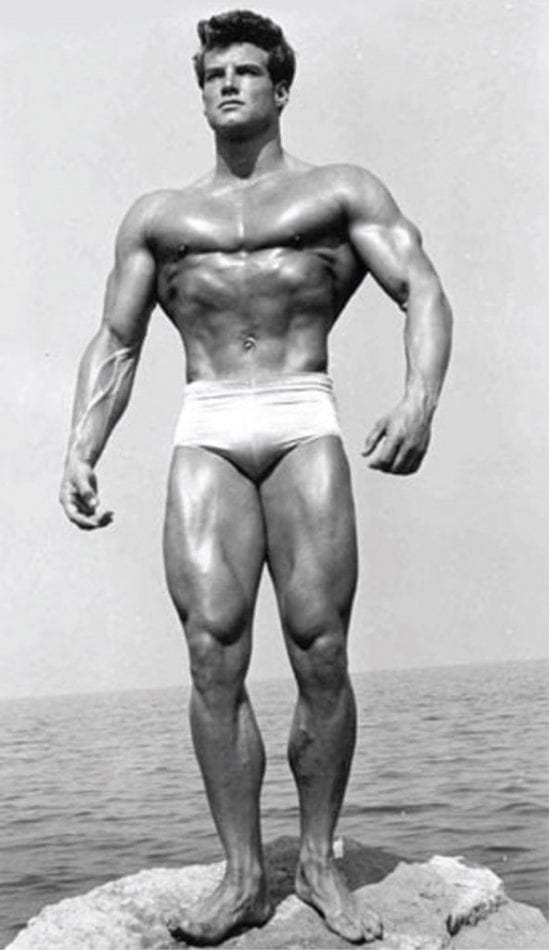 Steve Reeves Before and After Transformation

Few images exist of Steve Reeves before he started training. What is known is that within one year of leaving the army, he managed to build enough muscle mass to become Mr. Pacific Coast.

Moving away from bodybuilding and transforming into the Steve Reeves Hercules figure, he became less ripped, as shown below. 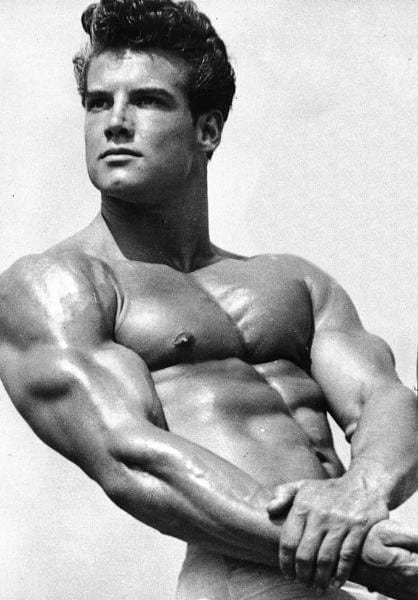 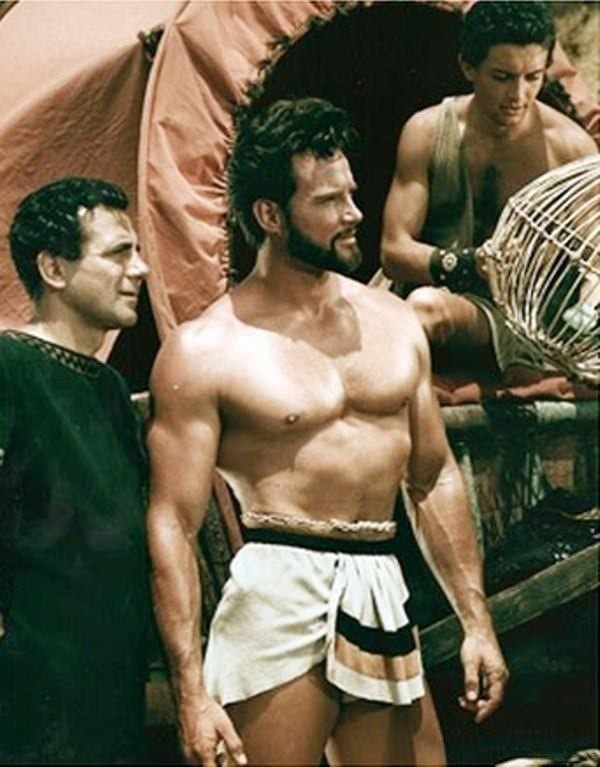 In the late 1940s, it was difficult to find any mass-market supplements. Steve Reeves knew he required protein to build muscle—so made his own powder blend. 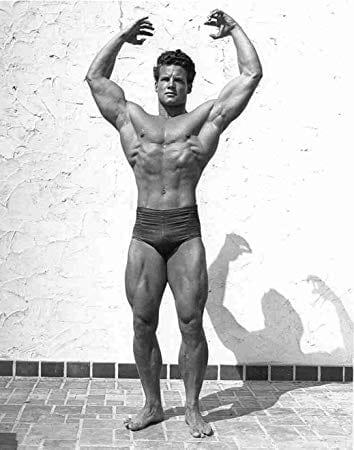 Here are some of the more inspirational and advice-loaded quotes from Steve Reeves:

“Today’s bodybuilders are carrying too much muscle for their frames, which distorts and obscures the natural lines of the body. Why these men would aspire to deform themselves at such tremendous sacrifice is incomprehensible.”

“Schwarzenegger came up to me and said, ‘Steve, you’ve always been an idol of mine.’ I looked him straight in the eye, half-smiling, and said, ‘Don’t give me that crap, Arnold. I read your book, and Reg Park was your idol. ‘He said, ‘Well… only because I knew I couldn’t look like you.’”

“I think if you really train hard, you use up everything—your nervous energy and all the rest of your energies. So you need to recuperate the next day. Recuperation is just as important as training.”

“Who Is Steve Reeves?”

He gained mainstream fame through his appearance in two Hercules movies.

“How Tall Was Steve Reeves?”

The Steve Reeves height was six feet one inch.

“How Did Steve Reeves Die?”

“How Old Is Steve Reeves?”

“How Tall Was Steve Reeves the Actor?”

The Steve Reeves measurements were:

No. The character of Superman has been played on screen by the similarly named George Reeves and Christopher Reeve. 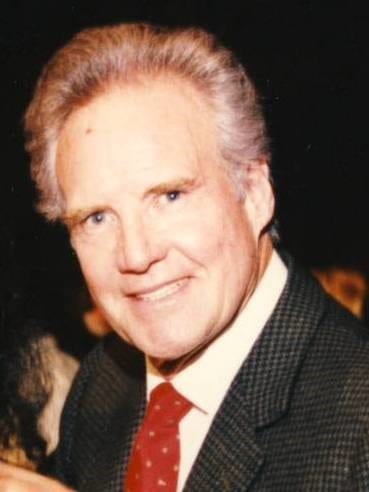 Steve Reeves inspired many of today’s bodybuilding greats to take up the sport.

His single-minded commitment to being the best made him both a competition winner and a movie icon.

Steve Reeves illustrated that it’s not how much you work—but how hard you work that’s important. Pushing himself to the limit for just three days a week—he became Mr. Universe.

He shows us all that even if our time is stretched to the limit—just a few intense sessions per week can build an astounding physique.