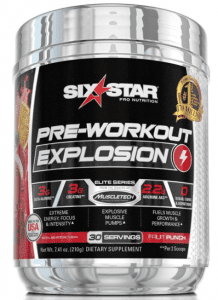 Although it sounds like a dynamite pre-workout—this Six Star Pre Workout Explosion review will expose the truth.

You hear of a dynamically titled brand and you think—damn, that supplement must be freakin’ awesome! But then you try it out and find it was all hype and yielded no results.

I know you’re nodding in agreement.

The truth is, what’s on the front of the bottle isn’t as important as what’s on the back. If the ingredients are true performance enhancers—then your training results will go off the scale.

And that’s exactly what this Six Star Pre Workout Explosion review will discover.

By looking behind the incendiary name, I’ll explore exactly whether this pre-workout is worth your time—or if it should be left to fizzle out.

Let’s get down to it!

Let me start this Six Star Pre Workout Explosion review by taking a quick look at the company behind it:

While the MuscleTech brand targets its products at the bodybuilding market, Six Star is aimed toward the athlete—both track and field.

Already you’re probably thinking—it’s not for me.

Yet, this pre-workout seems to be marketed for the serious gym-lifters. Six Star claims that this supplement will set your training on fire, by:

And how does it do this?

In the next section of this Six Star Pre Workout Explosion review, I’ll explain!

The ingredients in Six Star Pre Workout have been put together to:

If it can achieve these goals, then we could be looking at a powerful pre-workout. But, as I mentioned earlier, it’s all about the ingredient label.

Let’s get down to the serious business in this Six Star Pre Workout Explosion review and see what it contains. 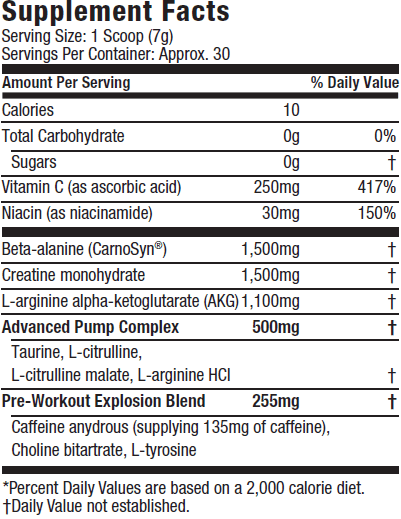 This supplement includes 10 pre-workout enhancing ingredients—seven of which are included in two different proprietary blends.

Let me take you through them all.

There are some ingredients that the very best pre-workouts should contain. That is, the most potent and scientifically proven compounds which send your lifting to unprecedented levels.

For the most detailed Six Star Pre Workout Explosion review, I’ve listed them below to test this pre-workout.

With only half of the best ingredients included—it appears there’s a lot more Six Star could do to improve this formula.

But, I know what’s on your mind—what, about the four ingredients that it does contain?

When you check the label, it’s not sufficient to check the just names of the ingredients—examining the doses of each is vitally important. 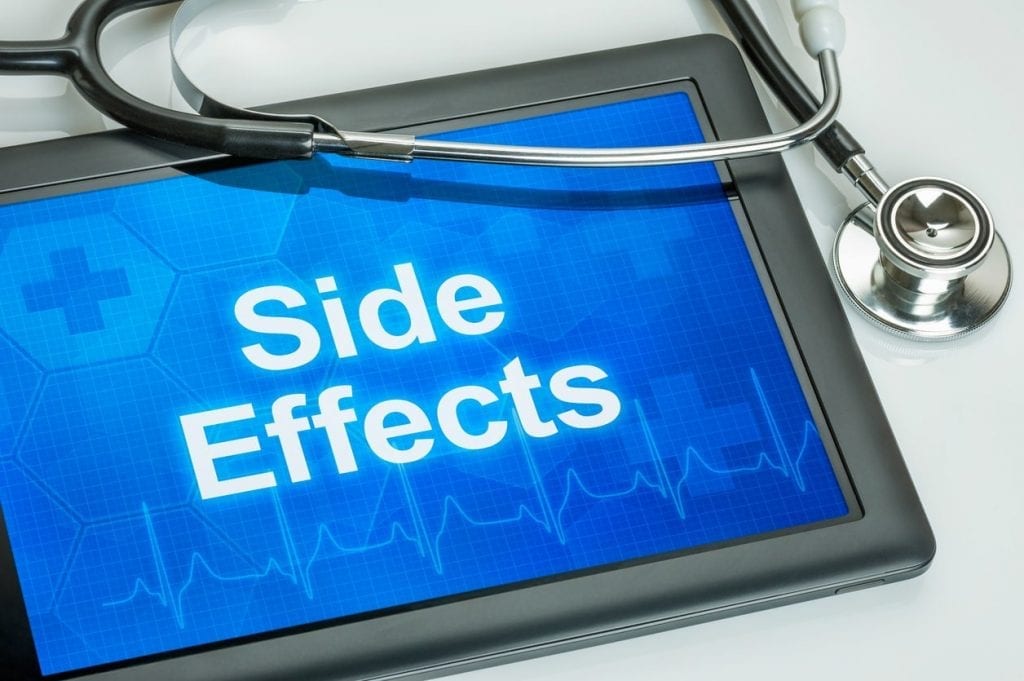 Pre-workouts can sometimes deliver unwanted side effects. Although harmless, they can be very uncomfortable and undesirable.

Usually, these stem from over-stimulation from caffeine. As Six Star Pre Workout’s dose of this ingredient is so low—there’s probably little chance of that happening.

Anyway, it’s possible that you may experience:

Additionally, some guys can experience a “tingling” feeling from consuming beta-alanine. If this occurs, don’t worry. It’s not dangerous and the sensation soon wanes.8

As it may contain fish, the answer is no.

Maybe this supplement is more powerful than I believe.

Hence, I scoured forums, bodybuilding pages, and the Six Star Pre Workout Explosion reddit, to bring you a selection of customer testimonials.

“Gave me a good energy boost.”

“Lower caffeine than some other brands so you might need to use more.”

“This product did not work well for me at all.”

“Doesn’t work might as well eat kool-aid to get more of an effect.”

Six Star may call its pre-workout Explosion—but it seems it’s not much more than a small “pop.”

Lacking in some of the most important pre-workout ingredients, and underdosed in the rest—it’s quite underwhelming.

Don’t get me wrong.

If all you want is a little buzz, and aren’t looking for some serious boosts—this could deliver.

Yet, as this Six Star Pre Workout Explosion review has shown—if you genuinely want to send your training into nuclear mode—forget about it.

Instead, seek out one of the best pre-workouts, which include all of the scientifically proven exercise-enhancing ingredients I discussed earlier. Doing this will genuinely send your results ballistic.

Mix one scoop of this pre-workout with six ounces of water and consume 30 minutes before the start of your training session.

“How Much Does Six Star Pre Workout Explosion Cost?”

There’s nothing in this supplement that will damage your health.

However, some users have experienced some minor side effects such as headaches, tingling, and insomnia. Although to be fair, the Six Star Pre Workout NO Fury side effects (a similar product) are more pronounced.

“Where Can You Buy Six Star Pre Workout Explosion?”

This pre-workout is available from the official Six Star website, Amazon, bodybuilding.com, and Walgreens.

No, as it may contain traces of wheat.

Some users have experienced some “buzz” from using this supplement, whereas others have seen no results at all. It’s about as powerful as the MuscleTech pre-workout, made by Six Star’s sister company—that’s weak too.

While it may have some small effect, it’s not powerful enough to really take your training to the next level. The Six Star creatine dose is very small.

As this product may contain elements of shellfish or fish—this supplement isn’t suitable for vegans.

You can receive a full refund if:

This only applies to the official website—other suppliers may differ in their returns policy.

“How Long Do You Have to Take Six Star Pre Workout Explosion Before Seeing Results?”

Some guys have described feeling more energized 30 minutes after consumption. Others have tried the product for one month and not witnessed an improvement in their training regime.

Worldwide shipping is available from the official Six Star website.

Gudmundur Gudmundsson is a fitness writer who has written hundreds of articles for different websites in the fitness niche, including thegymlifestyle, gymflow100, superfitbunny and supplement nerd. He is also a competitive athlete, has been involved in fitness and training for the past 10+ years. He is a self-taught expert who has read thousands of articles and experimented with a variety of different training and diet protocols. Gudmundur has shown that his methods work by experimenting on himself, his transformation is a testament to his knowledge. Where he tried to get as fat as he could and went up to 215 pounds and dropped back to 182 in a couple of months. He also enjoys strength training and has a 500lb deadlift personal record. Gudmundur is a guy that trains to be a strong healthy athlete while staying ripped and being able to have the stamina to run 10 miles without breaking a sweat.