Bodybuilding has many greats, but only a select few can be considered legends—Sergio Oliva is definitely the latter.

Being the only person to beat Schwarzenegger at Mr. Olympia—Oliva is considered by numerous aficionados to be the best bodybuilder of all time.

Yet his rise to international stardom wasn’t easy.

Stick with me to hear the true story of the ultimate lifter—and discover a tale packed with war, defection and insane rivalry. 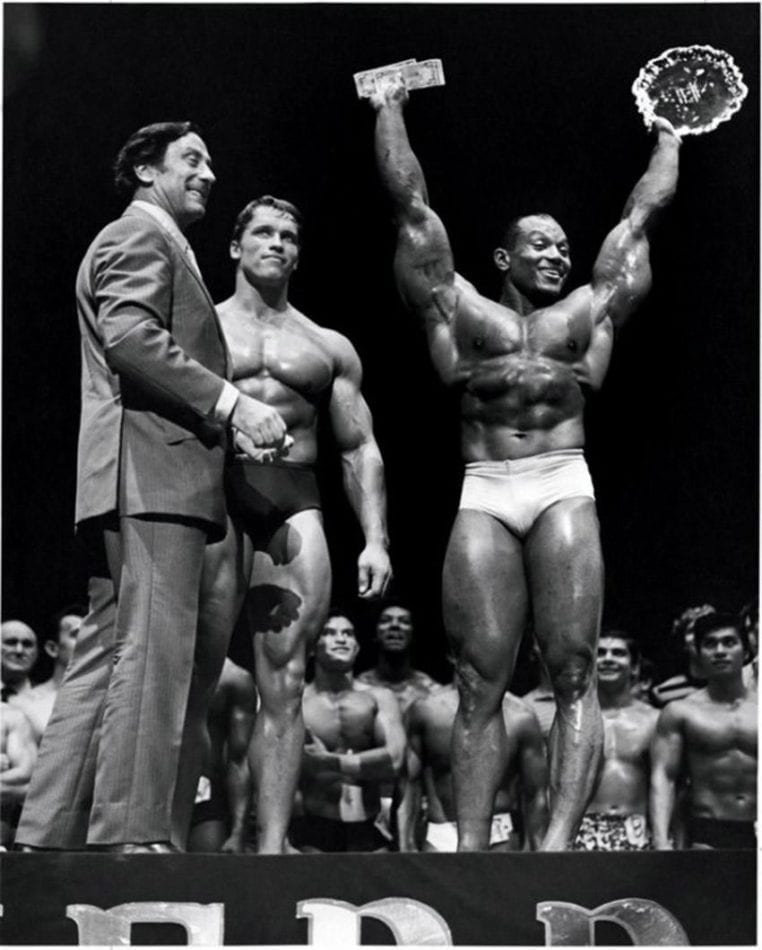 Born in Cuba in 1941, Sergio Oliva was destined to have a youth packed with struggles and hardship.

With little money in the family, he was sent to work in the sugar cane fields at the age of twelve—meaning no time for traditional education. By 16, Sergio Oliva had joined the army to fight against the communist forces of Fidel Castro.

When the war was lost, he began to spend increasing amounts of time at the beach—a place where he felt free from the oppression of the state. A chance encounter with a ripped sunbather led to him being invited to the local gym.

Once inside—he felt immediately at home. With little money, he struck a deal with the gym owner. Sergio Oliva would work there as a cleaner and handyman—in return, he would get access to the equipment and receive training in powerlifting. The Sergio Oliva bodybuilder was born.

With professional instruction, his strength increased dramatically—finishing second in the Cuban National Weightlifting Championship. However, when he was picked for the 1962 Central American and Caribbean Games, his life changed forever.

The games were held in Kingston, Jamaica. The night before the competition, he sneaked out of the athlete’s dorm, and ran to the American consulate—requesting political asylum.

The Americans granted the application—and he moved to the USA.

Living in Chicago (where he’d later be a police officer for 25 years), the bodybuilder Sergio Oliva continued his training. In 1966 he joined the IFBB and claimed both Mr. World and Mr. Universe contests.

Then, the story began which led to him being known as The Myth.

Sergio Oliva won three consecutive Mr. Olympia titles, from 1967-1969. It was the ‘69 event that began the Sergio Oliva vs Arnold rivalry.

Seeing Sergio Oliva in the warm-up room, Schwarzenegger was shocked:

“I understood why they called him The Myth. It was as if I’d walked into a wall. He destroyed me. He was so huge, he was so fantastic, there was no way I could even think of beating him. I settled for second place before we walked out on the stage…I never like to admit defeat, but I thought Sergio was better. There were no two ways about it.”

In 1970, a bigger and more shredded Arnold won Mr. Olympia, with Sergio Oliva being pushed into second place. However, future appearances in the competition were beset with controversy.

In 1971, Oliva was banned from entering the contest as he’d also competed in the rival NABBA Mr. Universe (even though the year before Arnold had done the same—and he was permitted to enter Mr. Olympia).

Then, in 1972, Oliva was defeated again by Schwarzenegger—despite most experts believing that the Austrian’s physique wasn’t as impressive as the Cuban’s. Until his death, Sergio Oliva remained convinced that the competition was fixed by Joe Weider.

Disgruntled, Sergio left IFBB competition and entered WABBA and WBBG contests instead. He didn’t return to Mr. Olympia until 1984 (he finished eighth).

Sergio Oliva married Arleen Garrett. However, the marriage didn’t last. In 1985, during an argument, she shot him in the stomach. He survived, but unsurprisingly, their relationship didn’t.

Outside of bodybuilding, Sergio Oliva starred in four movies, including Black Power (1975) and Los Temibles (1977).1

To this day, he holds the distinctions of: 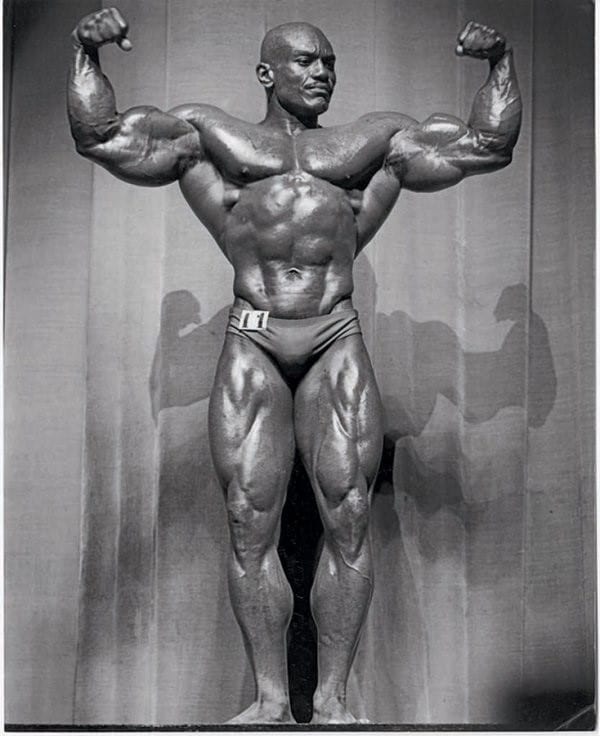 The Sergio Oliva bodybuilding record is unparalleled. Here are his most notable victories:

Additionally, Sergio Oliva was one of the very first people to be inducted in the IFBB Hall of Fame.2

Adjusted for inflation, it’s estimated that Sergio Oliva’s net worth at the time of his death was around $10 million.

The years of intense competitive weightlifting ruined his joints. By the early 1970s, his contemporaries recall that he was unable to fully lock-out his arms and legs—at least not without leading to a dislocation.

Hence, most of his training included only partial movements. To compensate for this reduced extension—he lifted heavier weights than most bodybuilders and with more reps. Many of his exercises have 15-20 repetitions.

The following are Sergio Oliva workouts from 1973:

Take a look at The Myth pushing his abs hard:

Here’s a quick glimpse of the Sergio Oliva arms workout: 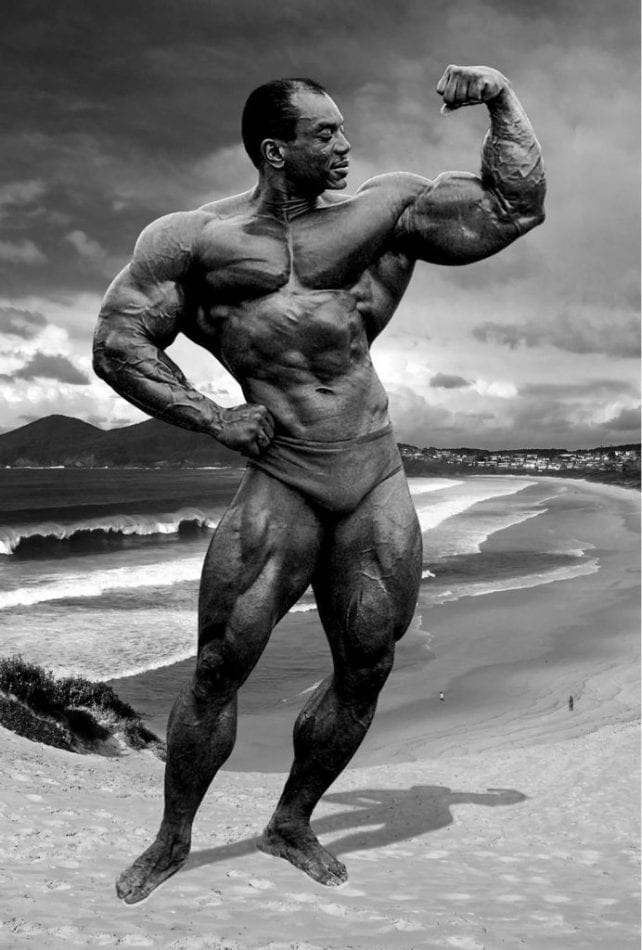 Commentators often say that Sergio Oliva achieved his phenomenal physique in spite of his food intake—not because of it.

He experimented with the Frank Zane diet but found that it left him feeling weak and lethargic.

The Sergio Oliva diet consisted of him eating whatever he wanted—hot dogs, burgers and sodas were not off-limits. He often commented on his super-fast metabolism—finding it easy to pile on muscle but not fat.

In addition to the meal plans below, Sergio would also drink copious amounts of milk and water. He said,

“I would drink a gallon of milk every day, and I would drink two gallons of water a day. But I’m sweating all day long.”

Here’s a video of Sergio Oliva posing. It shows that despite eating anything and everything, he remained ripped:

Was Sergio Oliva on Steroids? 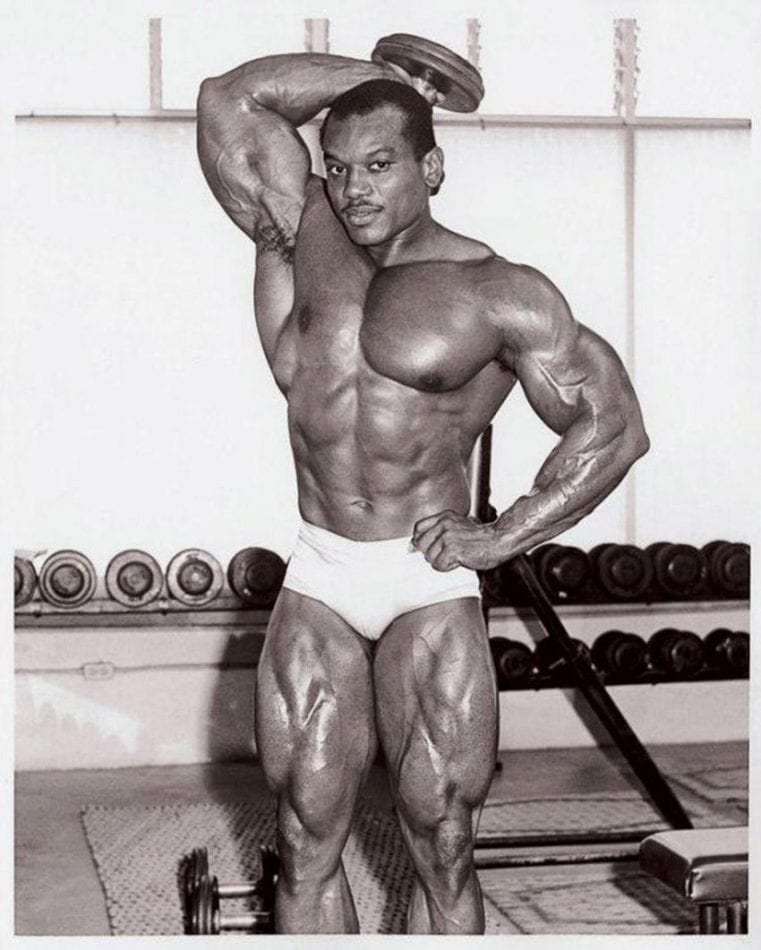 Unlike many bodybuilders, Sergio Oliva was honest about his synthetic use—mainly utilizing Deca-Durabolin and Dianabol.

Apparently, he tried Winstrol but wasn’t a fan as he disliked the vascular appearance which it created.

“Everybody in the old days used them: Frank Zane, Columbu, myself, Arnold, Larry Scott, Harold Poole, Dave Draper, and even Steve Reeves. There’s no way to deny it. It wasn’t much, nothing like today.”

He also remarked that the 21st-century bodybuilders are taking steroid use to the extreme. Sergio Oliva considered this both dangerous and a bad example to set for the younger generation.

Sergio Oliva Before and After Transformation

However, the following photos (in chronological order) show his rise from a ripped 215 pounds to a world-beating 250 pounds. 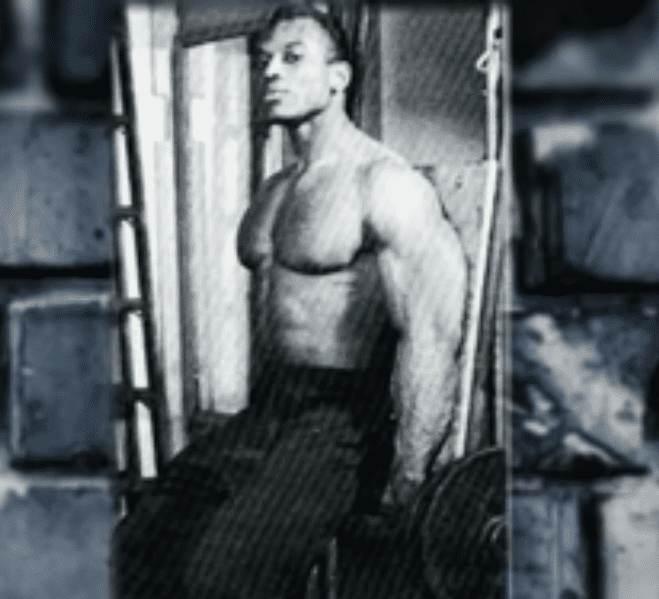 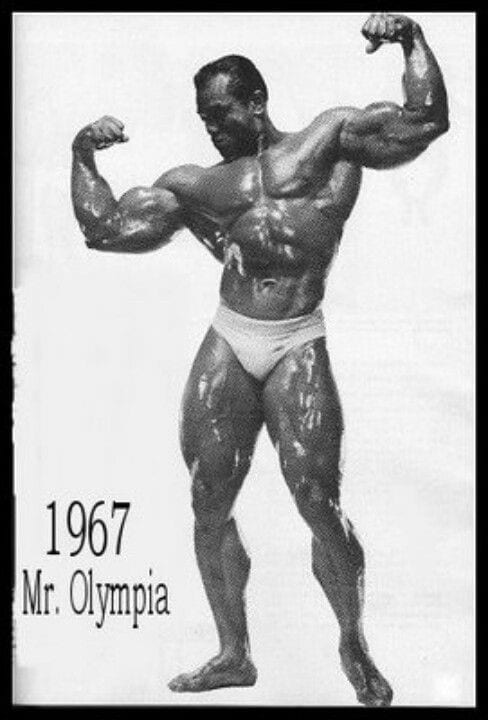 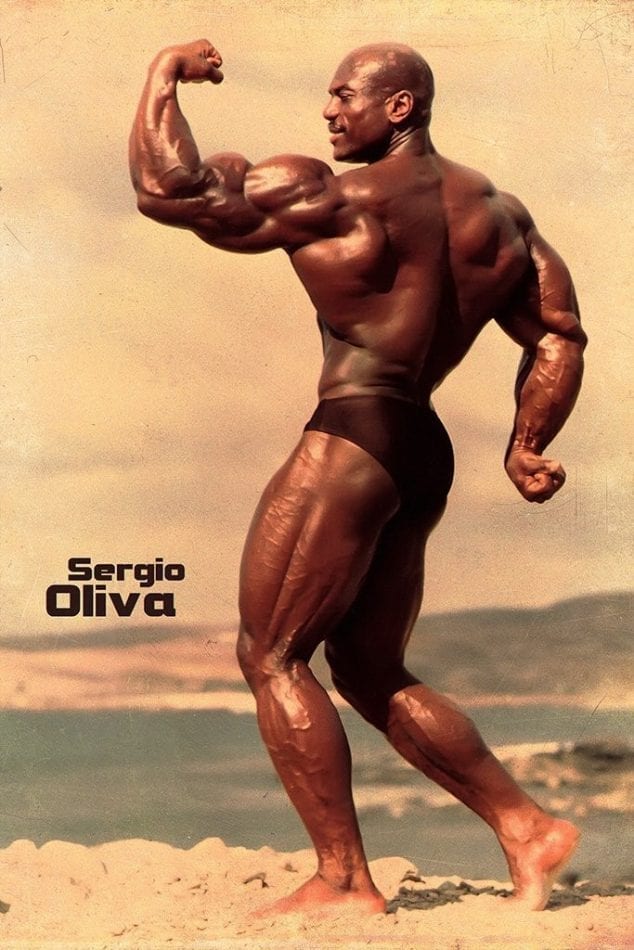 This video shows the Sergio Oliva transformation from the age of 20 through to 69 years:

The bodybuilder Sergio Oliva wasn’t an avid user of training supplements. However, he stated that he occasionally consumed additional protein.

He drank a lot of coffee—both before training and competition.

The caffeine content functioned as a pre-workout, powering him through his intense program. Furthermore, he said that it made him sweat—allowing him to drop water weight immediately before contests. 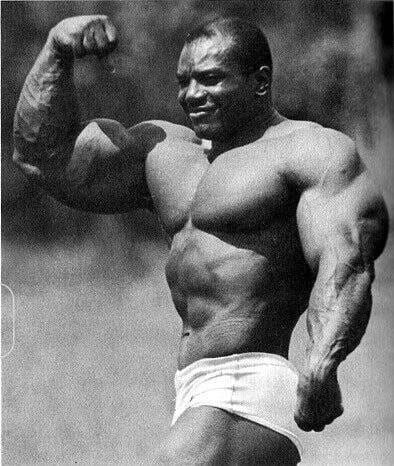 Although considered to be the ultimate bodybuilder—Sergio Oliva remains humble.

Here are a few of his words:

“I always believed that I have been blessed. I feel lucky to have been watched over by that big guy upstairs.”

“I was working 12-14 hours a day, and then I was going to the YMCA and do my exercises three to four hours every day. By the time I eat, that was it – time to go to bed.”

“I don’t have a college degree, but I’m not that dumb.”

“Arnold gave me a run for the money, no question about it. He was the only one who came close, there was nobody else.”

“I have never in my life been an aggressive person…I don’t want to intimidate anybody. I wanted to be nice to everybody the best I could.”

“Steroids today are at a different stage—they’re taking all kinds of stuff, human growth stuff that I can’t even pronounce.”

“What Did Sergio Oliva Die Of?”

The Sergio Oliva death was due to kidney failure. He was the first Mr. Olympia to die.

“When Did Sergio Oliva Die?”

“How Old Is Sergio Oliva?”

At his death, Sergio Oliva was 71 years old.

“How Tall Is Sergio Oliva?”

“How Many Olympias Did Sergio Oliva Win?”

“How Did Sergio Oliva Train?”

The Sergio Oliva training routine meant he worked out six times per week.

“How Did Sergio Oliva Get so Big?”

His size was due to intense training and incredible genetics (and some synthetic use).

“Did Sergio Oliva Have Any Children?”

Sergio Oliva Jr. is the son of The Myth. He’s also a professional bodybuilder like his father.

Sergio Oliva is probably the greatest bodybuilder of all time.

His physique was so phenomenal, Schwarzenegger had to admit defeat in the ‘69 Mr. Olympia—even before the competition had begun.

Despite being required to work from the age of 12, living under an oppressive communist regime and being shot in the stomach—nothing could hold Oliva back.

The Myth is indeed the only way to describe this bodybuilding legend.