Meet Shawn Oakman, the most frightening man in sport today.

The American college footballer has been described as the most genetically gifted athlete one of the country’s top trainers has ever seen — but that’s only part of what makes him so scary.

First, let’s deal with the numbers. Oakman, 23, stands 206cm tall and weighs 123kg. That makes him an inch taller than James and the same weight as NRL heavyweight Dave Taylor.

He has six per cent body fat, bench presses 180kg and squats 270kg. This summer while fooling around in the gym he did a 100cm box jump holding 30kg dumbbells in his hands and completed four chin ups with a 55kg weight tied to his waist.

But it’s not just his strength that makes him incredible. Oakman’s conditioning coach expects him to run a 4.6 second 40-yard sprint at the NFL draft combine next year and he also has a vertical leap of 97cm.

It’s no wonder when Fox Sports compiled its annual list of the biggest “freaks” in college football, Oakman was No. 1.

High-profile trainer Travelle Gaines — who has worked with NFL stars like Marshawn Lynch and Reggie Bush — was reportedly blown away in his first session with Oakman.

“He’s the most genetically gifted athlete I’ve ever seen with my own eyes,” Gaines told Bleacher Report. “Shredded, strong, explosive, fast. He shocked me with some of the things he can do … I won’t be surprised if Shawn has the best combine of anyone in history.”

Hearing things like that would intimidate any opponent the Baylor University defensive end will face this season (although he’ll miss the opening game against SMU after being suspended for violating team rules). But then they’ll actually have to stare up at Oakman and it will only get worse.

This photograph of him standing at the coin toss before last season’s Bowl game against Michigan State in January spread like wildfire across the internet and quickly became one of the most popular memes of 2015.

The NCAA, which controls college sports in America, essentially outlawed his abs in the wake of the photograph.

New rules have been enforced banning players like Oakman and Ohio State’s Ezekiel Elliott from wearing their jerseys rolled up above their stomach to expose their abdominal muscles. That supervillain-style face mask is gone, too. Oakman was bemused by the rulings.

The Philadelphia native isn’t declaring he wants to eat your children like Tyson did, but he still talks a good game.

“Half of the people standing in front of me right now are probably scared to death,” Oakman told a group of reporters at a preseason media day last month. “It’s amazing how big the whole thing has gotten. The picture is intimidating, so everyone who sees me assumes I’m intimidating. But I’m really pretty normal. I just like to chill and watch movies and play with my dogs. I have a nice, easy life.” 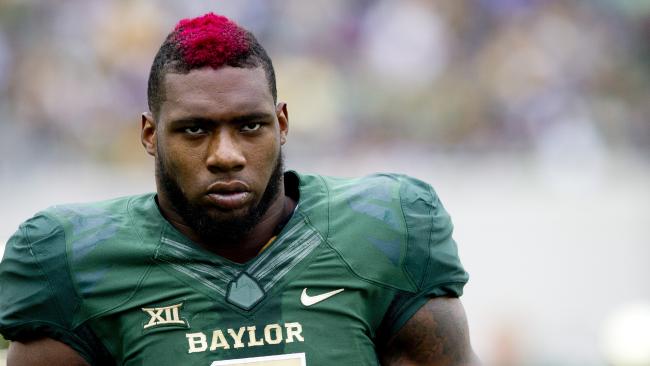 The dogs Oakman is referring to are Dame, Daisy and Duke, the three American bulldogs he walks around Waco, Texas — home of Baylor University — with his pet python, Baloo, draped around his neck.

Oakman has found a home at Baylor after a rough upbringing and is enjoying his college career so much he opted to stay for his final season despite being earmarked as a potential first-round NFL draft pick last year.

It’s a far cry from his first college experience at Penn State, which ended in 2012 when he was dismissed for violating team rules after an incident at a convenience store on campus.

According to a report in the Philadelphia Inquirer, “University police chief Tyrone Parham said Oakman entered the store and presented his student ID to purchase some items. However, the store clerk noticed that Oakman had hidden a hoagie (sandwich) and a bottle of grape juice on his person, and held on to the student’s ID, Parham said. In an attempt to recover the ID, Oakman shoved the employee against the wall, the chief said.”

Oakman was forced to sit out a season after transferring to Baylor but, compared to his childhood, that was a small obstacle to overcome.

Bleacher Report’s Jason King revealed as a child Oakman watched his cocaine-addicted mother get sent to prison and later contract HIV. His first memories were living in a homeless shelter before moving to a suburb that featured the number one drug corner in Philadelphia.

“It was straight-up poverty — everything you see on TV,” Oakman told Bleacher Report. “Robbing, stealing, drug dealers, crackheads. I should know. I was living with one.”

Oakman started playing football after he was taken in by a foster family while his mother was in prison. His life followed a similar path to Michael Oher, the NFL player made famous in the Sandra Bullock film The Blind Side — but as a defensive end, Oakman’s job wasn’t to protect quarterbacks, it was to annihilate them.

Coming off a season where he tallied 11 sacks, 19.5 tackles for loss and three forced fumbles, Baylor coach Art Briles wants Oakman to aim to be the No. 1 pick in the draft next year.

Then he’ll be the NFL’s problem to deal with.