Born into a country soon to be ravaged by war, Sadik Hadzovic’s early start in life was tough.

From hiding under the kitchen table to escape artillery shells through to the glitz of the USA—his story reads like a movie script.

Here is the incredible and inspiring life of Sadik Hadzovic. 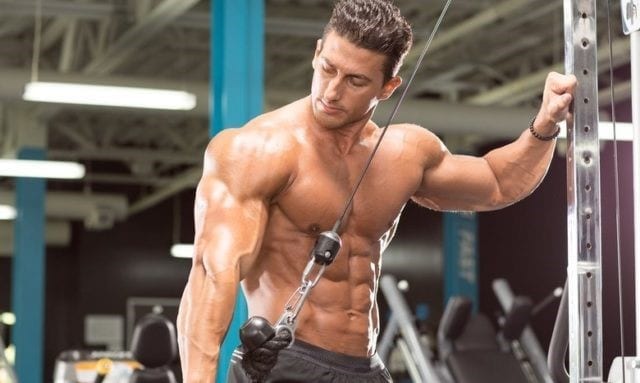 Sadik Hadzovic was born in Bosnia (then part of the former Yugoslavia) in 1987. By the age of four, he was living in a war zone. The advent of the 10-day war in 1991 started a series of conflicts that wouldn’t end for another decade.1

Gunfire, artillery shells and bombings were all part of Sadik’s early years. His parents knew this was no place for a small child. So, they packed up all the belongings they could carry and fled. Leaving their home country for the USA.

As refugees, they made their home in New York. Sadik Hadzovic’s parents were hard-working—sometimes sleeping for less than four hours simply to earn enough money to survive.

Sadik Hadzovic would later say that the determination and never-giv

e-up attitude of his mother and father influenced him to take the same approach to his training.

As a child, the somewhat lonely Sadik found his solace in comic books. He admired the strength and physiques of the superheroes—and wanted to be just like them. This was the birth of Sadik the bodybuilder.

“Since a young age, I knew how I wanted to look, and I dreamed of resembling those action figures, comic book characters, and superheroes. I would always do hundreds of dumbbell curls and push-ups as a kid, but it wasn’t until I was a teenager where I started really taking my training seriously and saw some impressive results.”

This passion for lifting didn’t wane. By the time he had reached 24 years of age, he had built an awesome physique. Sadik Hadzovic decided to test himself—by entering the NPC Eastern USA Championship.

He finished third—but Sadik Hadzovic didn’t take this as a negative. He used this as the driving force to work even harder and succeed.

When just 25, he earned his Pro Card and could finally leave the amateur ranks and join the professionals. His incredibly tapered form meant his many fans knew him as just, The Physique.

Today, Sadik Hadzovic lives in Westbury, New York, with his partner Chelsea Pethick and their two daughters. In addition to entering bodybuilding competitions, he frequently posts on YouTube and Instagram, and retails Sadik Hadzovic ebooks from his website.

The Sadik Hadzovic net worth is estimated to be $1-2 million.

Although Sadik Hadzovic was defeated in the first competition he entered—just one year later, he was placed first in the NPC Metropolitan Championship.

Since this initial taste of victory—he remained at the top of the field, winning three other amateur competitions before he turned Pro.

In the IFBB sphere, his most significant win was probably the 2015 Arnold Sports Festival. At Olympia, his results are mixed.

After two second placings in the Men’s Physique category, he moved up to compete in the Classic Physique division. In 2016 he finished third, and seventh in 2017.

There was no Sadik Hadzovic Olympia 2018 attempt, preferring to go on sabbatical for two years. It’s rumored that he will return in 2020, back in his favorite Men’s Physique category.

When training for the Men’s Physique category, Sadik Hadzovic concentrates on lifting heavy with high rep counts. It’s his opinion that this method adds impressive muscle but also keeps him lean.

He will also use one day for CrossFit or HIIT workouts to ensure that he doesn’t gain fat mass.

Here’s a workout utilized by Sadik Hadzovic to create a perfectly tapered V-physique.

Take a look at Sadik Hadzovic on back day:

Here’s Sadik Hadzovic working the legs in preparation for the 2019 Arnold Classic:

Take a look at Sadik Hadzovic on a heavy arm day:

Sadik Hadzovic uses this Saturday workout to concentrate on what he considers his weakest areas—calves and abs. Adjust as per your personal requirements.

On cardio day, Sadik Hadzovic spends at least an hour on one or more of the following exercises. 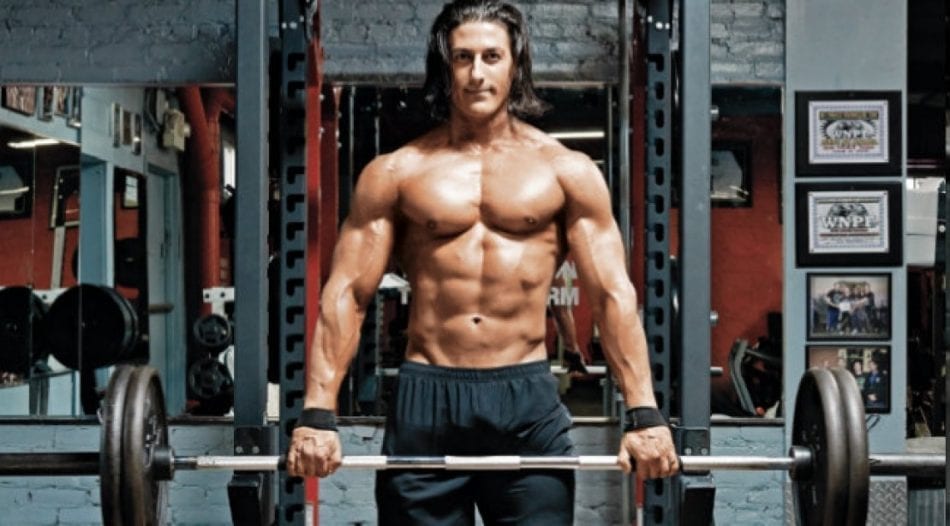 Here’s a slightly stricter diet (around 2100 calories) as Sadik Hadzovic 2019 prepares for the Arnold Classic.

Is Sadik Hadzovic on Steroids? 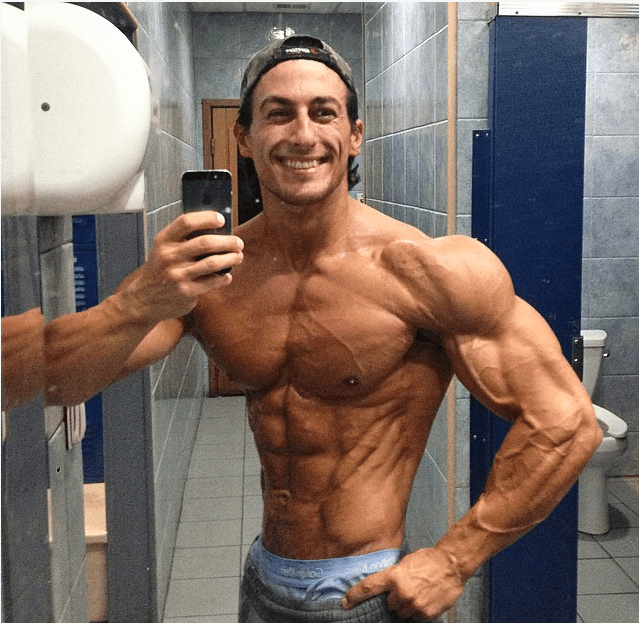 Sadik Hadzovic has neither denied nor admitted using steroids.

In his earlier days, he states that he struggled to make gains, despite working out like a machine. However, he discovered that the problem wasn’t his training, it was his diet.

Sadik Hadzovic increased his protein intake and spread his meals throughout the day. He then began to pile on the muscle.

When he changed from Men’s Physique to Classic Physique, he gained around 30 pounds in a year. This is nothing beyond the realms of possibility and doesn’t suggest synthetic use.

Furthermore, his traps and lats remained in proportion—not the ridiculous increases that often indicate steroid abuse.

While it’s not definite—I would suggest that Sadik Hadzovic is all-natural.

Sadik Hadzovic Before and After

As you can see from the images below, Sadik Hadzovic grew from a toned teenager into a shredded bodybuilder. The whole process took around four years. 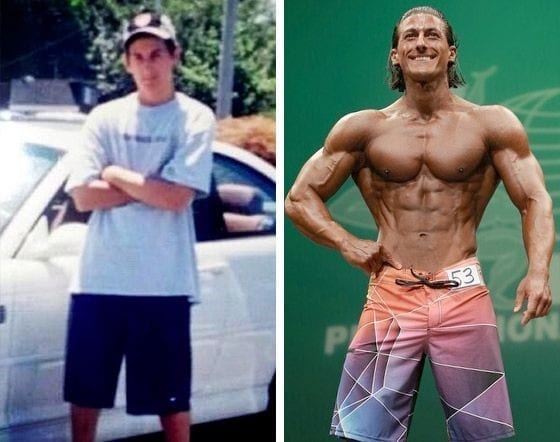 However, even more remarkable is the change he made in one year as he progressed into the Classic Physique category, as shown here:

If you want to watch the complete transformation, here’s a video tracking his progress:

According to the Sadik Hadzovic ebook pdf and interviews, this shredded athlete uses the following supplements:

He also admits to being completely OCD in the consumption of these products. He has specific times on particular days in which he takes supplements.

Sadik Hadzovic says the greatest pleasure he receives in life is inspiring others to better themselves. Here are some examples of his motivational utterances.

“Do the work. Every day. Challenge yourself to be uncomfortable.”

“Remember, motivational quotes won’t work unless you do.”

“Juggle multiple tasks at one time, and you’ll not get anything done. You lose focus and become overwhelmed. Distractions seem to be everywhere that makes it nearly impossible to accomplish anything.”

“We can have all the time in the world, but if our attention is diffused everywhere, we will hardly get the results we desire. “

“We all have different goals—different mountains to climb. One person’s climb may be about fat loss, another’s may be about muscle mass. Wherever you are, you can enjoy the view. There’s something worth seeing from every point in your journey.”

“How Old Is Sadik Hadzovic?”

“What Is the Name of Sadik Hadzovics Wife?”

“Does Sadik Hadzovic Use Free Weights or Machines?”

Sadik Hadzovic explains that a combination of both methods leads to the greatest returns.

“What Is on Sadik Hadzovic Gym Playlist?”

When training, Sadik Hadzovic has admitted to listening to DMX, Kanye West, Wu-tang Clan, Chevelle, Eminem, Jedi Mind Tricks, The Roots and System of a Down. 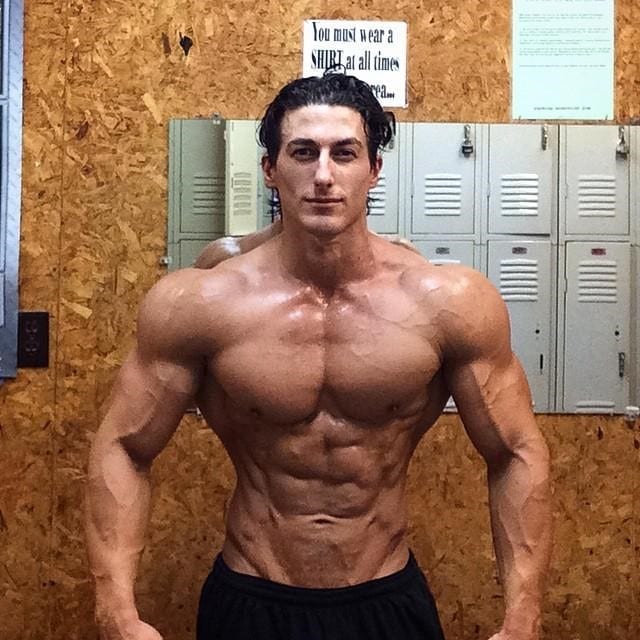 From growing up in a war zone, becoming a refugee and finally transforming his body into sculptured perfection—Sadik Hadzovic is an inspiration.

Wanting to become muscular and powerful like his superhero idols, he trained hard for years until he attained the physique he desired.

Even when he found success in the Men’s Physique category—it wasn’t enough for Sadik Hadzovic. He set himself a new challenge of stepping up to the more muscular Classic division.

He shows us never to rest on our laurels, never accept defeat and always try to become a better version of yourself.