Considered by many to be the greatest bodybuilder of the 21st century, if not of all time, Ronnie Coleman’s place in the history books is assured.

However, despite his phenomenal success, his early career was far from remarkable.

Here’s the whole insane and uncensored story of Ronnie Coleman—including why he thought he might never walk again. 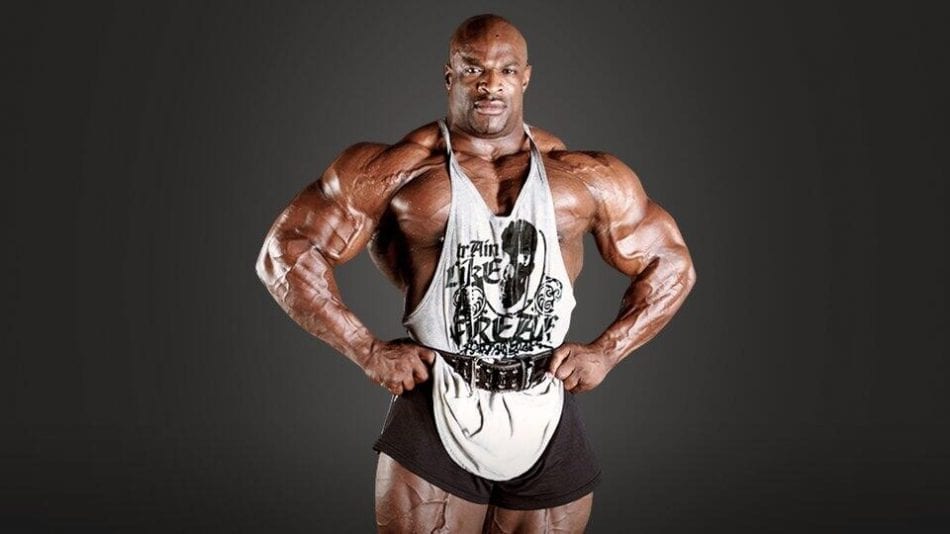 Ronald Dean Coleman was born in Monroe, Louisiana, in 1964. As a youngster, he loved sports—especially football.

He attended Grambling State University (GSU), where Ronnie played as a middle linebacker for the GSU Tigers. However, while he had the bulk of the other guys—he lacked serious muscle. Hence, to improve his appearance and performance—Ronnie Coleman started weightlifting.

He graduated with a Bachelor of Science in Accounting and immediately began searching for work. Unfortunately, Ronnie Coleman struggled to find employment in his local area and resigned himself to a position in Domino’s Pizza.

“Domino’s was the hardest job I ever had. I dreaded every day…but I knew I was destined for something better.”

In 1989, Ronnie Coleman escaped the life of tomatoes and mozzarella and became a police officer in Arlington, Texas. While there, he became buddies with a fellow officer, Gustavo Arlotta. Noticing Ronnie’s impressive frame, Gustavo suggested he came with him to the local Metroflex gym.

The Ronnie Coleman bodybuilding phenomenon was about to begin.

The owner of Metroflex, Brian Dobson, immediately saw Ronnie’s potential—and suggested a mutually beneficial deal. Ronnie Coleman could have free lifetime membership of the gym, if he allowed Dobson to train him for the upcoming Mr. Texas contest—Ronnie agreed.

At the competition, Ronnie Coleman obliterated the field—winning both the Heavyweight and Overall titles.

For the first few years on the professional circuit, his performance was average at best. Yet determined to reach the top, Ronnie Coleman intensified his training.

This dedication paid off—rewarding him with eight Mr. Olympia titles and the most wins in IFBB competition of any bodybuilder (recently beaten by Dexter Jackson).

Ronnie Coleman retired from bodybuilding in 2007. Since that time, he’s undergone numerous surgical operations to repair the damage incurred through his lifting career.

Today, he shares his home with his wife Susan Williamson and their four children. He continues to earn income from his supplement line and still posts videos on his YouTube channel.

It’s estimated that the Ronnie Coleman 2019 net worth is $10 million. 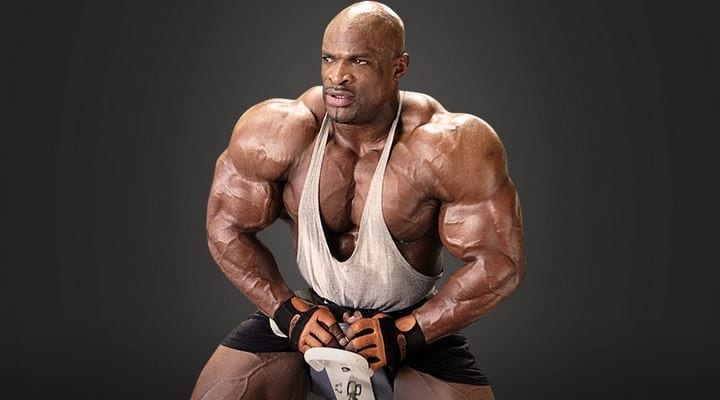 The records show that Ronnie Coleman is one of the best and strongest bodybuilders of all time.

However, his early career didn’t appear that promising.

While a regular face at Mr. Olympia, between the years 1992 to 1997, he finished sixteenth, fifteenth, eleventh, sixth and ninth. However, in 1998, he finally achieved the success he had worked so hard for, taking the Mr. Olympia title (beating Flex Wheeler and Nasser El Sonbaty).

This win equaled the longest ever streak of victories at Olympia—eight titles from 1998-2005 (previously achieved by Lee Haney). Seemingly unbeatable, in 2006, the bodybuilding world was shocked when Jay Cutler took the title.

Here are Ronnie Coleman’s most notable placings as a professional:

During the off-season, Ronnie Coleman would work out five times per week—this increased to six leading up to a competition.

Although for the majority of his routine, he concentrates on three sets combined with high reps—he also would throw in a 1RM (one-rep max) with some seriously heavy iron.

Here’s what a typical week in the gym would look like for Ronnie Coleman:

Here’s the big man explaining how he trains his legs:

Catch Ronnie Coleman preparing his triceps for the 2007 Mr. Olympia:

Take a look at Ronnie Coleman working his biceps in his home gym:

Take a look at some of Ronnie Coleman’s greatest ever lifts: 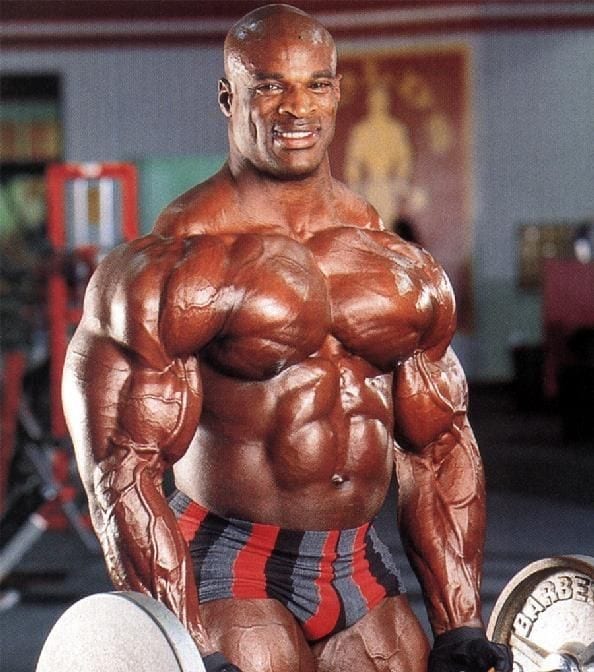 When bulking, Ronnie Coleman would consume between 5500-6000 calories per day spread across seven meals. Typically, this would consist of 45 percent protein, 40 percent carbs and 15 percent fats.

He also regimented his supplement intake, considering them as meals themselves, and ensuring he consumed them at the same time every day.

Here’s Ronnie Coleman taking you through what he eats in one day:

Was Ronnie Coleman on Steroids? 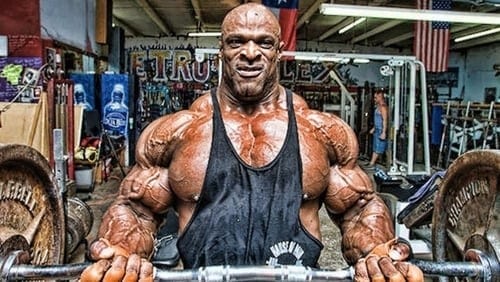 Let’s face it, it’s hardly a surprise. A physique that big just cannot be achieved through being natural. At times he displayed a severe case of ‘roid gut as shown in this video:

This kind of enlargement only usually occurs in bodybuilders using growth hormone.1

Furthermore, he admits it.

In the mid-1990s, Ronnie Coleman saw Flex Wheeler taking first place in numerous competitions, while he was lagging behind. He asked Flex what the secret was—which naturally turned out to be steroid use. Ronnie decided to follow suit—and began winning.

With a background in football, Ronnie Coleman has never been small. However, it’s interesting to compare the guy who won the 1990 Mr. Texas competition with the one who won Mr. Olympia in 1998. 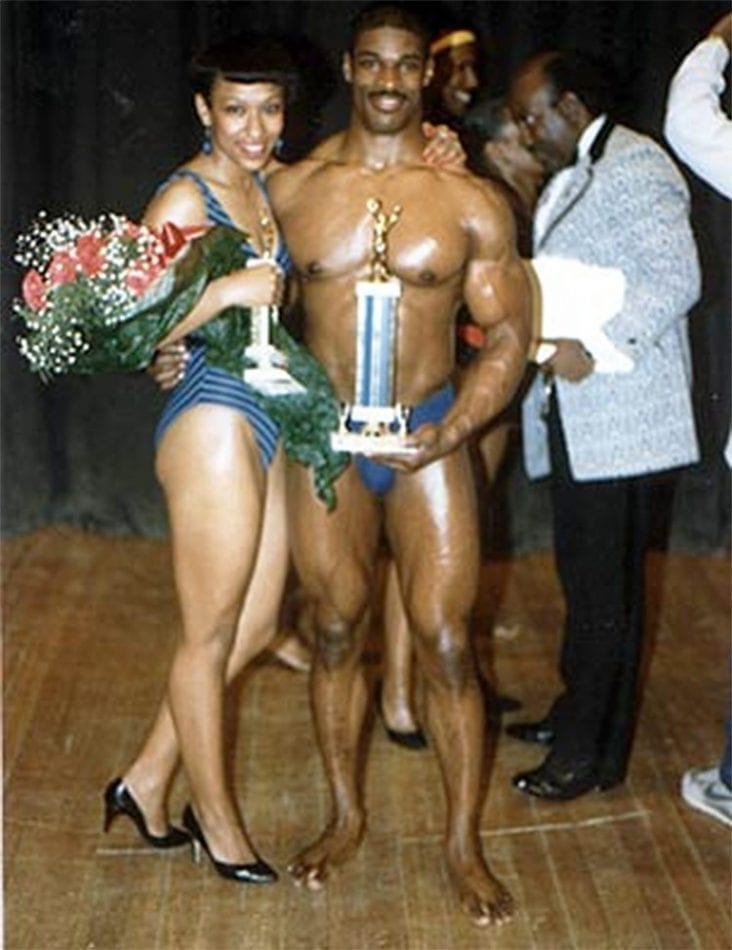 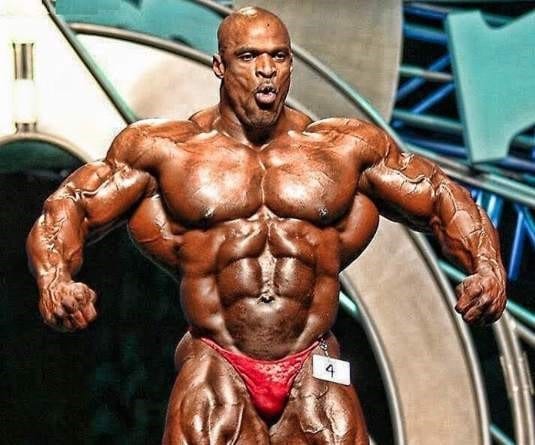 Since his retirement in 2007, many people have wondered—where is Ronnie Coleman now?

Unfortunately, life out of the sport hasn’t been easy.

His extreme training took its toll. Let’s face it, if you’re going to squat 800 pounds, that’s putting your body under immense strain.

To date, he’s undergone ten operations—including two hip replacements, disc decompression and spinal fusions. Many of these medical procedures have cost him between $300-$500K per time.

However, they haven’t been that successful. After the last Ronnie Coleman surgery in 2018, doctors told him he might never walk unassisted again.

Yet, on Christmas Day of that very same year, Ronnie Coleman seems to be back on his feet—posting this video of himself training in the gym.

Trying to stay in half decent shape even if I have to do something on Christmas Day. Nothing serious, just cardio, no lifting no weights whatsoever. Going to be 100% healed before I touch any kind of weights. That’s for damn sure!! Doing it on any day though, whether Christmas, New Years or Thanksgiving. It’s all about staying dedicated, and doing what it takes to accomplish those goals of getting healthy and healed. #yeahbuddy #lightweightbaby #itstillaintnothingbutapeanut#aintnothingtoitbutdoit 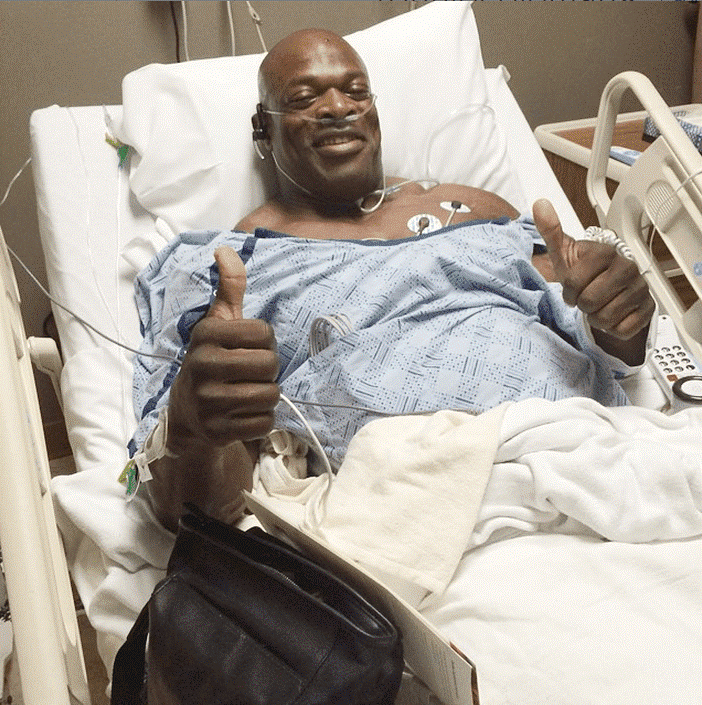 The brand stresses it isn’t just a re-named line of existing products. Instead, each one has been formulated from the ground up—with the company being owned and run by Ronnie Coleman himself.

Their most popular products include:

Here are a few words of inspiration from Ronnie Coleman:

“There are no secrets or magic tricks to be successful in life. It’s plain and simple. Work harder than everyone else, and the only way to do that is to do it. It may sound silly, but it’s the truth, and there ain’t nothing to it but to do it!”

“When you hit failure, your workout has just begun.”

“I loved challenging myself every day. The weight room was my therapy for everyday life stresses. No matter what I was doing, I always wanted to be the best.”

“Everybody wants to be a bodybuilder, but don’t nobody wanna lift no heavy ass weight.”

“What Happened to Ronnie Coleman?”

“How Old Is Ronnie Coleman?”

The Ronnie Coleman age is 55 years.

He was first married to Rouaida Achkar in 1998—although they divorced soon after. The current Ronnie Coleman wife is Susan Williamson, whom he married in 2016. Together, they have four Ronnie Coleman kids.

“What Are Ronnie Coleman’s Famous Sayings?”

His catchphrases, often seen in his training videos, work as self-encouragement to push him through his reps.

The most famous include— “Yeah buddy!”, “light weight, baby!” and  “nothin’ but a peanut!” 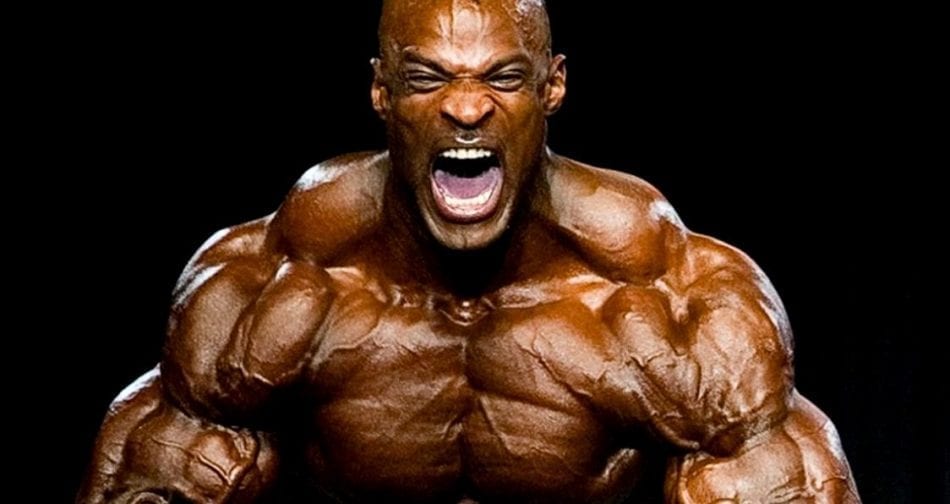 With eight Mr. Olympia titles—it’s easy to assume that Ronnie Coleman had it easy.

Nothing is further from the truth.

This behemoth of the bodybuilding world experienced years of defeat and disappointment before success came. Instead of giving up, he became determined to reach the top, however long it took. His tenacity paid off.

After retiring in 2007—he still exemplifies this never-say-die attitude.

Although being told he may never walk again after his numerous back operations—Ronnie Coleman resolved to prove the medical world wrong. Within just a few weeks, he was back training in the gym.

Ronnie Coleman exemplifies hard work, positivity and focus—rightfully earning the title of the Greatest Of All Time.