People know about steroids’ side effects but then they find out they can use peptides for bodybuilding.

Most peptides have one single purpose – Increasing the human growth hormone in the body.

They are a substance that manufacturers introduced to the fitness masses more than a decade ago and are now widely available across the globe.

The easy accessibility makes it possible for many people to get the benefits of them.

Most bodybuilders tend to view peptides as just another substance that can help increase the rates of muscle gain.

The first peptides that came out were pure human growth hormone and insulin.

Those were one of the stepping stones on which today’s mass monsters stepped on.

Now, the term peptide is pretty generic, as people use it to describe an array of different compounds.

Each of these compounds is responsible for the optimization of a certain physiological process.

That is to say that there are thousands of different peptides.

Peptides are compounds that have a chain of 50 or less amino acids and they are also intertwined with proteins.

The only difference between them, is the size of the amino acids in the chain.

We generally get a certain amount of peptides via our daily nutrition.

The thing is, those quantities are very limited, which is exactly why people resort to synthesized peptides.

How do peptides work

Alright, as we learned, peptides are organic compounds that have molecules consisting of two or more amino acids.

As you should know by now, proteins are the building blocks of every living organism on the planet.

The building blocks of the proteins themselves however, are the amino acids.

That means that proteins are essentially a sequence, or a chain of amino acids.

Those sequences can be long and they can be short.

It is namely the short ones that we refer to as “peptides”.

These short sequences of amino acids carry important cell-to-cell information in the body.

They are an important part of the proper functioning and homeostasis (balance).

Last but not least, we can derive peptides from animals, plants, but we can also make them artificially.

But now, how do they work exactly?

Well, peptides play key roles in growth of the body and the proper functioning of all systems.

The good part about them is that they are good at fighting off aging, as they stimulate every cell of the body. (1)

This means they help with the regenerative processes, while hindering the degenerative ones.

As we mentioned above, peptides are the cellular messengers for cell-to-cell information, that ensure everything in the body is functioning correctly.

There are many different types of peptides that work in different ways in the body, depending on their amino acid content.

Now of course, when such a product gets onto the market, and even before that, it goes through a big number of trials.

Peptides have been researched in many clinical trials and they have been proven times and again to be extremely effective.

While they can be used to treat certain disorders of the body, there are just a couple of them that are important for bodybuilders and fitness trainees. 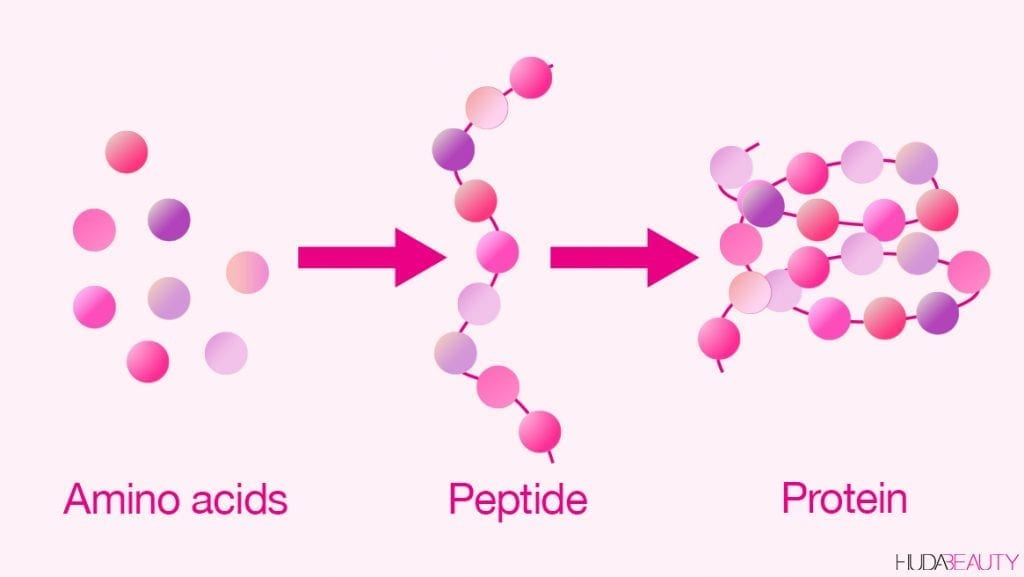 Different peptides can be used for different goals:

There are many other peptides used to treat certain psychological conditions and stress.

However, the above-listed ones are the most important ones for the fitness trainee.

As already mentioned, each peptide has its own function and can make different parts of the physiology respond to it.

One of the best things about peptides is the fact that they do not hinder the functions they interact with.

Instead, they boost them via heightened stimulation.

Are peptides good for building muscle?

Okay as we learned, many peptides alleviate the human growth hormone in the body.

In order for them to be effective however, they have to be taken for a minimum of 3 months with a preference of 6 months.

It is important to know that unlike steroids, peptides don’t really cause massive changes in body composition.

That is especially true when it comes to gaining bulk muscle mass.

Also, peptides don’t act as quickly as other fat burning substances would, if that is the goal at hand.

That is to say that instead of a sudden, drastic changes, we will get more naturally looking, steady gains over time.

Another benefit of peptides is that you won’t lose your gains after stopping them, like you would with anabolic steroids.

Furthermore, with peptides, our health is at a much lower risk, as they don’t have any lethal side effects.

Below, we will briefly discuss the two most popular peptides out there – IGF-1 & GHRP-2

IGF-1 is one of the most commonly known peptides in the fitness world.

The Insulin-like growth factor – 1 (IGF-1) is a protein hormone that has a similar structure to insulin.

This growth factor plays an important role in growth, especially in kids, however, as we age, it can still keep acting anabolically (constructively). (2)

To be a bit more specific, when human growth hormone (more commonly known as HGH) goes through the liver, it ends up in the form of IGF-1.

That in turn is one of the biggest contributers to muscle growth.

Along with that, IGF-1 optimizes and boosts many other physiological processes in the human body.

This is exactly why many people use it as anti-aging therapy.

Now of course, it doesn’t work like magic for everyone, as your biology is unique and responds in a certain way to given substances.

And so, for example, so people have the so-called HGH resistance, others have less HGH receptors, etc.

You get the picture. 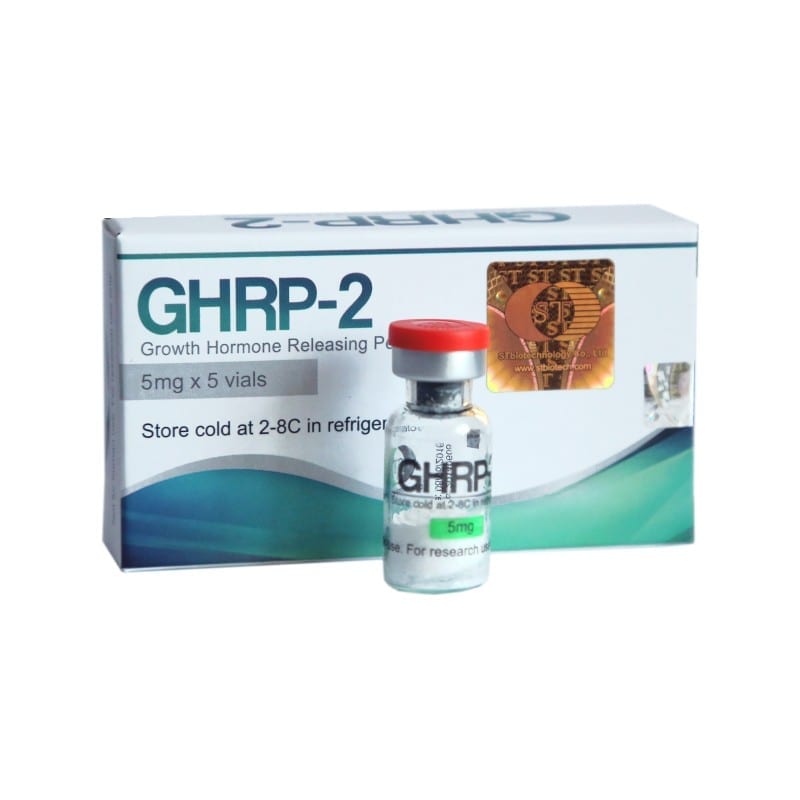 GHRP-2 is a peptide that signals the body to start producing more growth hormone.

The human growth hormone offers an array of positive effects, such as reduction of body fat, increase in muscle mass, strength and endurance.

Last but not least, we’d like to mention again its amazing anti-aging benefits.

Needless to say, this peptide alone, when supplemented with, won’t entirely account for the desired end results.

Ultimately, there are a ton of other factors, such as training, sleeping and nutrition that will account for optimal gains.

It is good to know that the production of GH by the body, makes the liver secrete IGF-1, which we just talked about above.

A common effect for people using GHRP-2, is to have an alleviated desire for food, as this peptide is an appetite regulator.

This is also because GHRP-2 releases another peptide called ghrelin, that too, is an appetite regulator.

People who fight deficiencies of human growth hormone, can use GHRP-2 as a product.

Furthermore, GHRP-2 can be used to treat cases of food disorders, as well as cachexia.

Cachexia is essentially a loss of weight during a period of starvation.

Another common reason for people to use GHRP-2 is weight control in cases of obesity.

That is to say that GHRP-2 can help you “shortcut” to gains, optimizing muscle gaining and fat burning processes.

Last but not least, it may act as a preventative measure for injury, as it strengthens connective tissue.

Among other positive effects that GHRP-2, is its ability to increase collagen in the organism.

You can check out our article on collagen by clicking HERE.

Overall, GHRP-2 is a peptide that offers a variety of positive health effects.

Are peptides a steroid?

Well, as we learned, peptides are messenger proteins that stimulate certain organs of the body to produce more hormones.

On the other hand, anabolic steroids are modified versions of the sex hormones and are specifically designed to boost growth.

This is exactly why we mentioned earlier that peptides don’t act as quickly on body composition as steroids do.

Peptides can only signal the pituitary gland or testicles to produce higher levels of hormones.

The difference is that peptides don’t force the body to go beyond the normal levels.

This is because the pituitary gland and the testicles only have a certain capacity for hormone production.

For comparison, in the best case scenario, proper peptide intake can produce the GH & test levels of a 20 year old, in the body of a 40 year old.

As opposed to peptides, anabolic steroids can be taken in massive amounts and create an anabolic environment in the body that is everything else but natural – Up to 500 times the normal human levels.

That is to say that when we are on actual, anabolic steroids, we are at levels of testosterone that can’t be achieved naturally.

The bad thing about anabolic steroids is that it shuts down natural testosterone production.

This happens when the body detects massive amounts of sex hormones circulating in the blood.

That is exactly why many bodybuilders experience a shrinkage of their testicles.

Furthermore, the excessive amount of testosterone may cause the body to convert some of it to estrogen.

This is why many steroid users report the well-known side effect “gynecomastia” and even lactating. 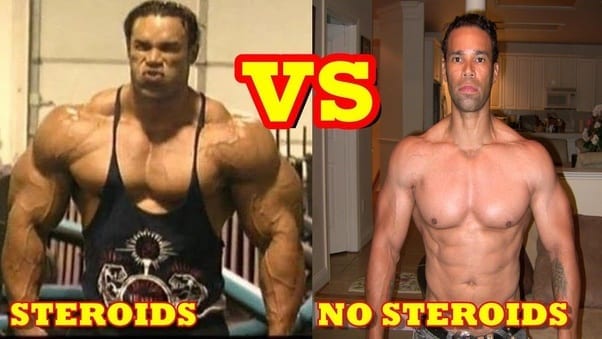 The body expresses the above-mentioned side effects, in order to maintain hormonal balance.

However, the harsh truth is that even with a proper post-cycle therapy, most people won’t be able to get their testosterone levels higher naturally.

On the contrary, peptides simply signal our hormone-releasing glands to create a bigger output.

This is why peptides won’t cause hormone and glandular disruption, like anabolic steroids do.

Now, we’re not saying peptides are better than steroids, but we are simply saying that both have different end goals.

Peptides can be used as an anti-aging therapy and steady muscle gain.

On the flipside, steroids are the preferred choice for people oriented to a bodybuilding career.

In essence, a peptide regimen can be done for decades with the goal of increasing longevity and healing, with little to no side effects.

And that is not the case with high doses of anabolic steroids.

In the long term, steroids lead to a flurry of health issues, such as infertility and cardiovascular disease.

Why do bodybuilders use peptides?

Peptides are widely used for their anabolic effect on the individual’s musculature, as the growth hormone releasing peptides do the job.

Needless to say, the rate at which you gain muscle mass, strictly depends on the proper stimulus and the following phase of recovery.

Peptides help muscle and connective tissue recover quicker in between the separate workouts.

With peptides, bodybuilders can quickly build mass, because the tears in the muscle that are made during each workout, reach their peak of recovery way quicker.

And even though peptides are not as strong as steroids, if you stack and repeat the process of optimally quick stimulus & recovery, the effect will be visible soon enough.

Peptides are well-known by the fitness masses, and they have been used by many people, who reported little to no side effects.

1 thought on “Peptides for bodybuilding – Are Peptides Safe To Use ?”