The Bodybuilder Ulisses JR calls himself “Natural Bodybuilding Icon” and he recently competed in a bodybuilding show.

In this Muscle Mania bodybuilding show he was spotted with gyno on stage.

If you do not know what it is here is an explanation: Gynecomastia is the growth of breast tissue in males.

It’s a condition that usually results from an imbalance in the sex hormones estrogen and testosterone.

Men generally have some amount of estrogen in their bodies, similar to the way that women usually have some level of testosterone.

Bodybuilders sometimes get gyno when they come off steroid cycles.

Because that body is so used to getting added testosterone into their body that it doesn’t know what is going on and starts producing more estrogen.

That was a very very simple explanation to a much more complicated science.

But now you understand why men get gyno.

You never know why Ulisses has that thing on nipple. It doesn’t have to be because of steroids.

Maybe it’s some other medical condition.

Watch the video below to see Ullisse’s gyno. 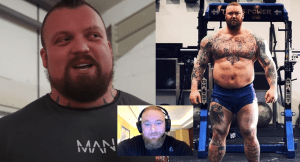