AN AMATEUR bodybuilding enthusiast who works out every day in a Dublin gym to hone his physique is probably injecting steroids into his pen*s every night, according to a fat bastard who joined the gym on the 2nd of January and has yet to lose a pound.

Vincent Carolan, 22, has been training for two years with the intention of finally entering a local bodybuilding tournament, and subjects himself to a gruelling workout schedule 6 days a week, coupled with a strict diet and supplement plan.

Carolans work, however, has been deemed a front for daily doses of steroids, according to James Durcan, a 35-year-old who recently signed up to the gym after his doctor told him to lose weight or he would die before he was forty. 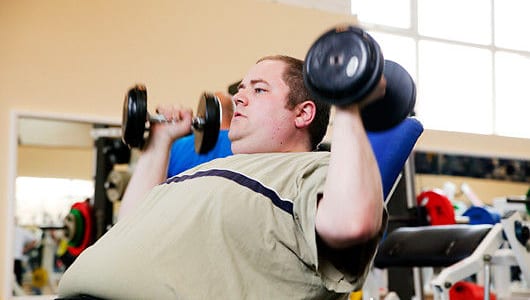 “Lads like that make me sick, ” said Durcan, as he strolled on the treadmill at its lowest setting. “Look at him down there, pretending to lift weights while in actual fact he’s probably snorting lines of steroid powder all day. And what’s with those shakes he drinks after every workout? Loaded with steroids, I’m sure. Lads like that aren’t even that strong, it’s all just for show.

“I’d probably kick the sh*t out of that lad, no bother”. he added.

As Carolan continued his intense training, which he hopes will win him a podium place this Summer, Durcan made the decision to up the treadmill speed to the second lowest setting, lasting almost five whole minutes before heading to KFC as a reward for doing so well.