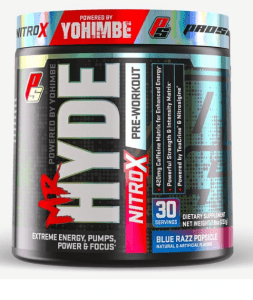 There have been a lot of rumors that this pre-workout has been banned—this Mr. Hyde Nitrox pre-workout review will illustrate it’s only half the story.

Mr. Hyde was once touted as the most powerful stimulant-packed pre-workout on the market—delivering powerful energy bursts and supercharging training sessions.

And, I know you’ll agree, that’s what we’re all after, right?

However, with gossip about it being banned and the formulation being changed—it’s a concerning scenario. Is, or was it, danger

This article will make it all clear.

In this Mr Hyde pre workout review I’ve put together everything you need to know about this supplement—if it’s effective, how it works, and whether it’s still available today.

Do you want the crazy story behind this supplement? Then read on!

Let me start off this Mr. Hyde Nitrox pre-workout review with a little detail.

Mr. Hyde is a pre-workout designed to take energy, strength, and recovery to the limits. Created with the serious bodybuilder in mind—its formula is angled towards massively improving workout performance—delivering faster mass-gaining rewards.

When Mr. Hyde pre-workout was introduced by well-known supplement manufacturer ProSupps, it rapidly gained a massive following. Half through clever marketing and a half through a crazy stimulant-based formulation—guys couldn’t get enough of this stuff!

But, don’t get too excited.

The original Mr. Hyde wasn’t as incredible or innovative as it first appeared—its main power coming from a massive dose of 419 mg of caffeine.

Yet, as you will soon discover in this Mr. Hyde pre-workout review, this first incarnation was withdrawn. This led ProSupps to reformulate the pre-workout—into what could be called Mr. Hyde 2.0.

However, whether guys missed the original formulation, or they just didn’t trust the product any more—ProSupps then discontinued Mr Hyde 2.0 and replaced it with their Signature series pre-workout—which bears little resemblance to the first two products. They also have Mr. Hyde Nitrox and Mr Hyde Icon for sale.

Mr. Hyde Nitrox pre-workout concentrates on three areas of training—using its own distinct compounds. To give credit where it’s due, in each of these “matrices” as they call them—all ingredients are quantified.

However, you can give your matrices whatever names you want—it doesn’t mean they’ll deliver the returns they promise.

Let’s get down to the serious detail in this Mr. Hyde pre-workout review—is it as good on the inside as it appears on the outside?

As you can see from Mr. Hyde’s Nitrox pre-workout label, it includes 13 ingredients in three separate matrices.

Let’s look at the key components of each for the next part of this Mr. Hyde pre workout review.

It aims to increase endurance through the use of beta-alanine to prevent the buildup of lactic acid, and creatine to replenish the muscle-contracting ATP (adenosine triphosphate) stores. 1 2

Additionally, it includes the nitric oxide boosting l-citrulline and nitrosigine. These ingredients act as vasodilators—opening up the blood vessels, allowing increased delivery of oxygen to the muscles—improving strength and stamina.3 4

However, despite containing proven ingredients—it’s not as powerful as it first appears.

Firstly, while creatine is a potent endurance enhancer—it’s better treated as a separate daily supplement—building up your stores with a few initial days of loading and then maintaining those levels. There’s little benefit to taking immediately before working out.

Secondly, citrulline and nitrosigine are powerful nitric oxide boosters—but only when taken in sufficient doses. This pre-workout contains one gram—the best pre-workouts will include a more effective dose of around six grams.

As you can see from Mr. Hyde pre-workout label, this is a stim-heavy formulation.

But be very, very, careful.

A 2017 study on this formulation, in this dose, considered it to be unacceptably high in caffeine—stating it will “pose a serious public health risk to consumers”. 6

As you will see later in this Mr. Hyde pre-workout review—many users have witnessed these serious effects.

Designed to increase focus, it includes:

As an endurance enhancer, it’s limited. Yet as an energy booster it’s very powerful but, as the studies indicate, possibly to the point of danger. The focus raising ingredients are ok, but may need more research.

Let me tell you something.

The best pre-workouts are phenomenal and should be part of your training regime—but without the right ingredients, they’re pointless.

Hence, for this Mr Hyde pre workout review, I’ve put together everything you should look for in a serious training booster.

Out of the seven powerful pre-workout ingredients—Mr Hyde only contains three.

And that’s not great.

Furthermore, of the three it does contain, I’d consider citrulline to be underdosed, and the caffeine content to be too high.

I want to make something clear in this Mr Hyde pre workout review:

They’re similar—but they have a few important differences. Let’s look at them in this Mr Hyde NitroX vs Mr Hyde comparison.

So, Mr Hyde NitroX vs Mr Hyde in brief:

In my opinion, despite the claim that Mr Hyde NitroX is more powerful than the original Mr Hyde, the only improvement I can see is that it may have more beneficial effects on focus—nothing else.

Furthermore, the online Mr Hyde review and remarks are not very impressive.

The answer is… sort of.

In effect, there was a Mr Hyde pre workout recall. It was withdrawn from sale by ProSupps under the direction of the US Food and Drug Administration (FDA).

Surprisingly, it wasn’t down to its high levels of caffeine but a more innocuous ingredient—picamilon.

This lab-created combination of γ-aminobutyric acid and niacin was created in the Soviet Union in 1969, where it remains used to this day as a prescription drug.12 13

Not surprisingly, the FDA decided that it wasn’t a vitamin, mineral, herb, or amino acid and therefore had no place in a dietary supplement. In 2015, it sent letters to suppliers stating they must remove products that included this ingredient.15

It was then made available with a different formulation, which we have looked at above—without the picamilon ingredient. Although, this too was discontinued and replaced both with Mr Hyde NitroX and the Mr Hyde Signature Series pre-workout.

With the massive dose of caffeine, it’s unsurprising that some guys have suffered side effects.

After researching numerous bodybuilding forums for this Mr Hyde pre workout review, the most commonly experienced were:

Furthermore, beta-alanine is known to cause “itching”. Technically known as paresthesia, it’s annoying but not harmful, and passes within a couple of hours.

So, we’ve looked at the ingredients, but the important question for this Mr Hyde Nitrox pre-workout review is—what are guys using this supplement experiencing?

Here are some typical comments:

“Gives lots of energy and gets your heart pumping.”

“It gives me a slight tingle feeling and it gives me enough pick me up as I hit the gym.”

“If you are sensitive to caffeine this will blow your lid right off.”

“I felt light-headed and then got a pounding headache.”

“It makes me sick to my stomach. Do yourself a favor and spend more money on a better product.”

“The crash afterward is awful.”

“Nausea in the pit of your stomach that doesn’t go away even hours after taking it.”

Many customer testimonials have one thing in common—awful caffeine-induced side effects.

I scoured the internet for this Mr. Hyde pre-workout review—looking for the best ways to obtain this supplement.

This is what I found.

As seen in this Mr. Hyde Nitrox pre-workout review—there’s no disputing that it will give you an energy buzz.

The problem is this.

Its severely stim-heavy formulation may promote unwanted side effects.

While you may get a vitality boost—it lacks some of the best ingredients you would expect to see in a top-notch pre-workout. Those that it does contain appear underdosed.

Get yourself a powerful and proven pre-workout that contains the ingredients I outlined earlier in this Mr Hyde pre workout review. In doing so, you will have all the benefits of an excellent performance-enhancer—without the side effects.

Mix one scoop with eight ounces of water 15–30 minutes before commencing your workout.

“How Much Does Mr Hyde Nitrox Pre Workout Cost?”

“What Are the Flavors Available for Mr Hyde Nitrox ?”

Although safe, the high caffeine content has been known to cause side effects, such as headaches, nausea, and stomach upsets.

“Where Can You Buy Mr Hyde Nitrox Pre Workout?”

Mr Hyde pre-workout can currently be purchased from Amazon and prosupps.

The high caffeine content will undoubtedly give an energy burst—but possibly at the expense of unwanted side effects.

As an endurance and stamina builder—it’s average at best.

Mr Hyde offers a 30-day satisfaction guarantee. If you aren’t completely satisfied they will refund your money.

“What Does the Mr Hyde Pixie Dust Flavor Review Say?”

Mr Hyde Pixie Dust is one of the most popular flavors for guys using Mr Hyde NitroX pre-workout. The Mr Hyde pre-workout flavors for the original product didn’t include this variety.

“How Long Do You Have to Take Mr Hyde Nitrox Pre Workout Before Seeing Results?”

You should feel the energy and vitality-boosting effects very quickly—within around 30 minutes.

However, the lack of potent stamina builders may mean that, despite continuous use, you see little improvement in your endurance.

The online store you purchase from affects whether Mr Hyde pre-workout has worldwide availability. Check before ordering.