I was SHOCKED with my Mi40 results (you decide if they were good or bad) using the training manual, so I had to put together this Mi40 review…

So, if you’re a guy that wants to build muscle mass fast, stick around: 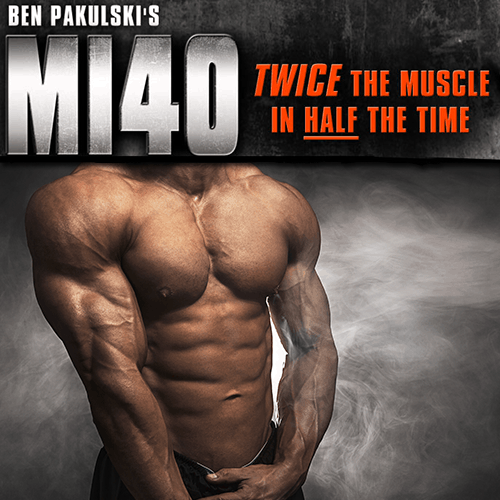 As being the best muscle building program on the market right now, it’s designed to:

So, let’s jump right into this Mi40 review!

Mi40 Review Overview – What I learned while on Mi40 foundation

After going through the program for 40 days, I learned:

SPECIAL Mi40 OFFER: Save money by investing in the program today >

So, like I said, I did the program from A-Z and here’s roughly what happened:

I realised from day one that I wasn’t going to be able to half-ass through this program. It took some discipline to do exactly what Ben Pakulski was telling me to do. I skipped one workout on a Wednesday, but immediately regretted it so I went straight to the gym in the evening.

That was the last time I did that and after a while the program just became normal to me.

After the first 7 days, I was very sore all over the body! Which was an amazing thing, because that had not happen in a while! I guess my body had become too used to my previous training style.

This is where this Mi40 review gets interesting.

My girlfriend (who didn’t know I was doing a new training program) said this to me:

“Wow! Your arms are huge”

I’m not sure if it was just a coincidence or not, but honestly, I also felt bigger even after just two weeks of following the Mi40 training manual PDF.

So, I guess it was working!

I had decided to not step on the scale in the first two weeks.

So once I did at the end of week 3, I was shocked!

I couldn’t believe it, I actually weighed myself two more times just to be sure it wasn’t an error.

Keep in mind that for guys like me (who have been training for 10+ years) we can usually only expect this kind of muscle gains every 6-12 months. So, hopefully you understand how shocked I was.

If you’re a beginner (or have been training for less than 3 years) you could expect much more than that!

After seeing my results after weighing myself in the previous week, I was so excited and motivated to keep going that I started to push myself even further with the workouts and diet manuals.

I came to a point that at one point in the gym during a heavy squat, I felt that I was going to puke.

I ran to the bathroom, but luckily I managed to control so that didn’t actually happen. But it made a good story for this Mi40 review!

After 4 weeks on Mi40 foundation, I was starting to notice that I was dropping body fat too! I couldn’t believe it. Normally I would have to do a specific cut in order to get shredded. But now I was getting more ripped even though I was “bulking” and building muscle at such a rapid pace.

My gym buddy confronted me.

Yeah, I’m serious. One of the guys who usually trains at the same time as I do confronted me during week 5.

“Bro, did you start taking steroids?”

It was the biggest compliment I had received for a couple of years (I know it’s weird to say that, but it’s the truth). Wow! Even guys in the gym are starting to notice my results from Ben Pakulski’s Mi40 workout pdf.

At this point I had gained about a total of 4 lbs of muscle mass, and I had lost probably around 1.5 lbs of fat in the meantime. Insane gains for a natural bodybuilder.

As I knew the program was coming to an end, I wanted to make the most of it.

I did EVERYTHING 100% like the program said and pushed myself even further than the week I almost puked.

My muscles were starting to look much fuller, denser and more sculpted. I was also seeing some serious leanness in my abs (first time in a couple of years!).

I felt much stronger overall and everything seem to get better and better.

Update! Have you seen the CRAZY gains this one guy made with Mi40? Check it out here

Mi40 Before and After

After 40 days of following the Mi40 training manual and program protocols, I managed to gain muscle mass by a lot. Lose unwanted body-fat while I was at it and increased my strength in every single exercise by about 30%!

Currently, I’m not following the program, but I’m planning to do another round of 40 days to get my gains to the next level!

I’m very much looking forward to it, because honestly, overall this was a really fun experience.

So, I’m usually bit extreme when it comes to my training and dieting. So I had to find out if there were more people seeing gains like me.

Not to my surprise, I found HUNDREDS of guys that had gotten similar results.

Here are a few of them: 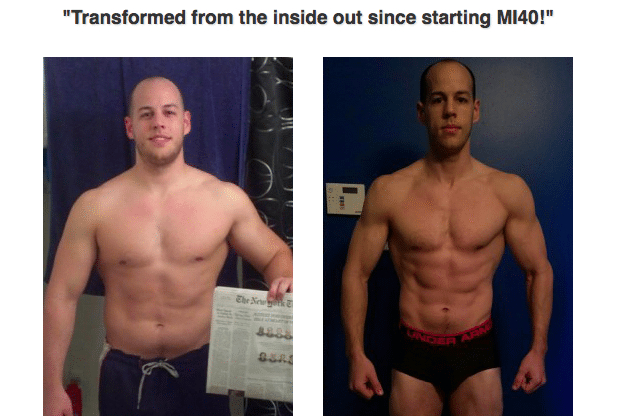 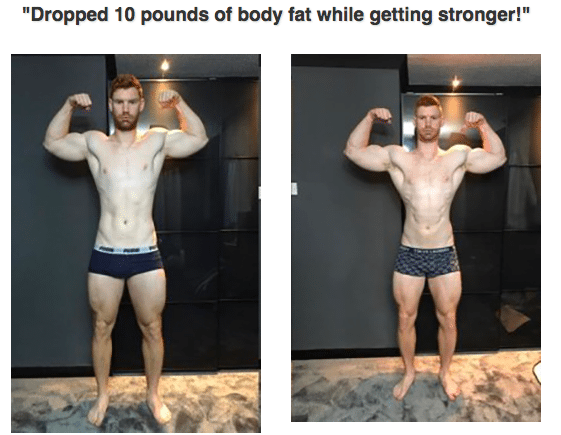 What exactly do I get? 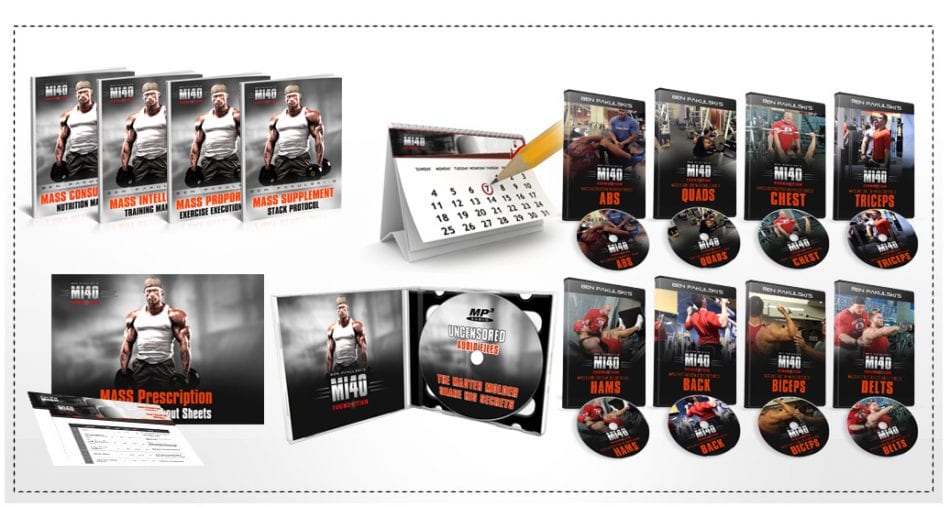 Ben Pakulski already explained in detail what each and every product that you’re getting does for you.

So, I’m not going to spend much time talking about that, but here’s what it is:

To learn more about each manual visit: this page on the Mi40 website >

Ben Pakulski is the real deal. It honestly feels like cheating to have a Mr Olympia competitor train you to build muscle mass as fast as possible.

He is the real deal without a doubt.

But the big elephant in the room: He takes steroids.

Yes, that’s true, and he addresses that question multiple times on his website.

One thing we mere mortals, the natural, must understand, that steroids alone can not take you to a Mr Olympia physique. The amount of work required can not be described with words.

Like you have learned above from my Mi40 review and results, I for one made ridiculous amount of “natty gains” following his advice :).

There is no shipping involved. This is an electronic product that is delivered INSTANTLY to you after purchase.

You get instant access and can start right away.

I find the headline “twice the muscle in half the time” as seen here a bit dramatic. Yes, you will make gains, but I doubt anyone (even steroid user) can get that much better results with the program (unless you really SUCK now).

One of the free bonuses is a 7 day detox. Which is pretty useless. But… it was a free bonus anyway, so who am I to complain haha!

Review Conclusion – Is Mi40 worth the money? 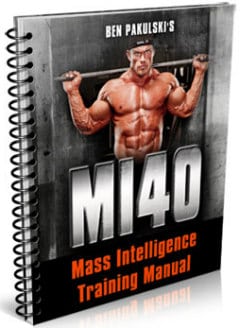 After doing this Mi40 review I have decided to name Mi40 foundation my #1 recommended choice for men who want to build muscle mass faster.

I was really happy with the contents inside, everything was explained effectively and made simple to understand. The step-by-step protocols helped me make massive gains in just 6 weeks.

I had not made any gains for some time prior to doing the program, so it was a really nice surprise to see my gains skyrocket finally once again like that.

And I wasn’t the only one, these guys made massive gains as well >

Now after doing the initial 40 days, I plan to follow the principles indefinitely to make even more gains.

After this Mi40 review you might have some more questions, and I get it. So here are a few of the most frequently asked questions.

Is there a Mi40 Coupon or Discount code?

Unfortunately no. But there’s a 100% money back guarantee so you have nothing to lose if you don’t think it’s worth the money.

How long does Mi40 foundation take to work?

Well, you will instantly be getting faster results. With that said, it takes 2-3 weeks to start actually SEEING results in your body.

No, it’s a legit muscle building program that delivers the products promised.

Who is Ben Pakulski?

Ben Pakulski is a IFBB pro bodybuilder who has won several competitions and even featured on the top Mr Olympia list.

How old do you have to be to do Mi40 program?

Does Mi40 work for women?

Yes, and here’s the proof >

Where to buy Mi40 by Ben Pakulski?

You can only buy from the official website here >