Chances are at some point in your life you or a friend has laughed off their “heavyweight” status by saying “hey, muscle weighs more than fat!”

There is a lot of confusion around this topic so we thought it would be best to put an article together that clarifies the issue.

This is important because sometimes we can’t tell how successful a cut was based on weight – after all if you lost some muscle it might appear as though you’ve lost weight on the scale but in the mirror you might not look much better.

Similarly, if you go on a fat loss program that involves resistance training you might find you look much better in the mirror despite the fact that your weight hasn’t changed at all.

This sometimes results in trainees restricting calories unnecessarily and ultimately ruining their progress. In fact it’s even possible to gain weight on a cut particularly if you are new to resistance training. 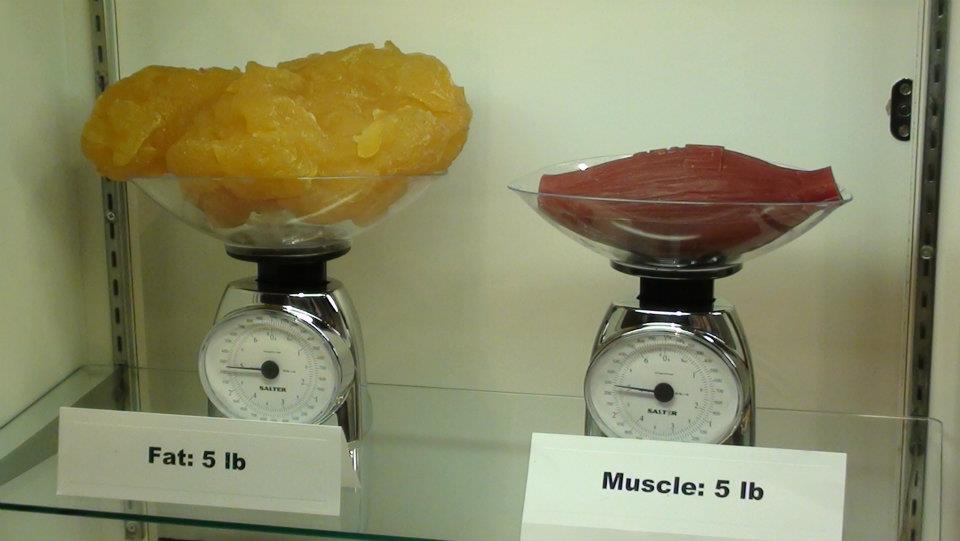 However, the area in which muscle and fat differ is their density.

You see muscle is far more dense than fat and as a result 5lbs of muscle takes up a lot less space on your body than 5lbs of fat.

This is why people can look thinner despite gaining weight – if they replace the fat with muscle. It makes sense too – muscle feels very dense when you touch it.

Compare that to fat which is flabby and soft.

In addition to weighing more, muscle will actually burn a lot more calories than an equivalent amount of fat.

Therefore two people who are the same height and weight can have very different metabolisms if, say, one is 9% bodyfat and the other is 25%. The one with the larger muscle mass is the one who will be burning a lot more calories around the clock making it easier to maintain that lean physique.

That’s not to say you can eat whatever you want just because you have a lot of muscle. Look at all those retired football players who used to be very muscular – many of them get very fat after retiring.

However every bit helps and that extra 100-300 calories a day burned is enough to cover a small meal.

Make Sure your T-Levels are Solid

Most guys are waking up now a days realising just how important this is for overall health. This is why put together a guide to test boosters. – You can read it here.

As we have talked about in this article it is obvious that fat is not heavier but it is more denser than muscle.

If you are anything like me you want to keep the body fat% on your body as low as possible. The reason why I talk about testosterone is that if your t-levels are high your body will naturally hold on more to the muscles and eliminate fat.

That is the reason why women have naturally more fat than men because they have lower t-levels and of course some other factors that play a role in that as well.

Luckily we live in a world where supplement industry has created natural and safe supplements that can boost your testosterone production.

But beware of companies that use ineffective fillers in their supplements. – You can see which ingredients actually work in our in-depth guide here.

But hurry, we spent MONTHS on this research and we’re thinking whether we should start charging guys small fee for reading it or not. Simply because it will save you hundreds of dollars anyway.

But at least for now you can read it for free here: Read our test boosting guide.

So to get back to the point of the article – no, muscle does not weigh more than fat. That’s a trick question. However, muscle is far more dense than fat.

It takes up less space on your body so after a couple years of cutting and dieting you can look drastically different even if your body weight is the same.

As you can probably tell at this point we can’t rely entirely on the scale to measure progress. It doesn’t tell the entire story since weight increases can be explained by muscle gain.

Similarly even if your weight hasn’t changed you might have lost weight. As a result it’s important to keep track of changes in your body fat % as well as to take progress pictures.

By doing this you can tell if gaining a few pounds was a result of additional body fat put on or just more muscle mass.

1 thought on “Is Fat Actually Heavier than Muscle?”