When the topic at hand is fitness, health and nutrition, we can’t neglect one aspect of the whole picture – Supplements.

Now, in a previous article we mentioned that bodybuilders from the golden era relied on little to no supplements and instead, they mainly focused on optimizing their habits and behaviors linked to their goals.

However, nowadays, more and more products flood the market and we have a variety of supplements to use for different goals.

Many of those supplements are risky, but for today’s article we’ll talk about one of the more important, safer supplements, namely creatine. 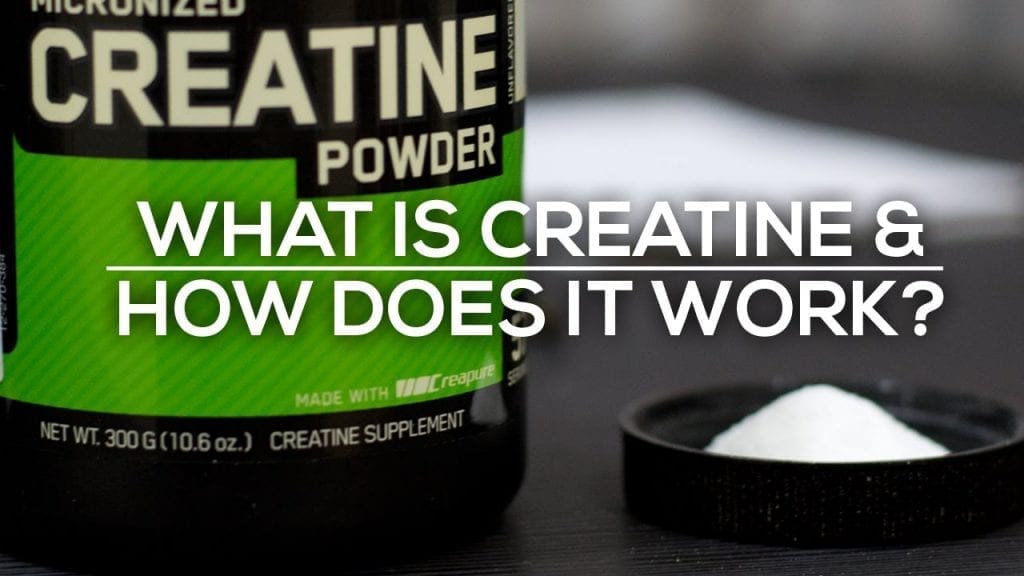 If you have followed our educational articles for some time now, you should know that the body uses one main molecule to fulfill the demands for energy – Adenosine triphosphate.

Adenosine triphosphate, shortly ATP, is the purest source of biological energy, as it is able to release energy for use basically instantaneously.

Well, even though that is true, ATP stores in the body are quite limited, which is why it can sustain intense activity for about 3-5 seconds.

After the 5th second, the body starts counting on the Creatine phosphate (CP) to regenerate ATP.

In other words, creatine is not just a supplement, but also a molecule that the body produces itself and uses as a secondary source of energy.

Without getting too scientific, we’ll just mention that upon breakdown of ATP, its byproduct ADP (Adenosine diphosphate) connects with the Creatine phosphate and that regenerates ATP.

Knowing this, we can conclude that if ATP & Creatine phosphate are immediate sources of energy, that fulfill the demands for intense muscular activity, then creatine as a supplement will help us:

Needless to say, with an increased strength and strength endurance, you allow for more mechanical tension upon the musculature, which ultimately leads to increased muscle growth.

That is to say that creatine itself doesn’t DIRECTLY build muscle, but rather its positive effects on the musculature’s properties allows for a bigger overload and hence growth.

Well, much like anything else on this planet – If you consume it excessively and systematically, you will damage your body.

However, when supplemented with in the recommended amounts, creatine has been proven times and again to be completely safe.

To back this up, we reviewed a research, where the subject was a young man with a SINGLE kidney, who took 100 grams of creatine in even doses during the first 5 days, followed by a month of 5 grams daily.

After strict monitoring of his kidney functions, the researchers concluded that a disruption was not pesent.

If you are a completely healthy individual, who is looking to gain some muscle and strength, we do recommend you to give creatine a shot, once you are past the beginner stage of your training. 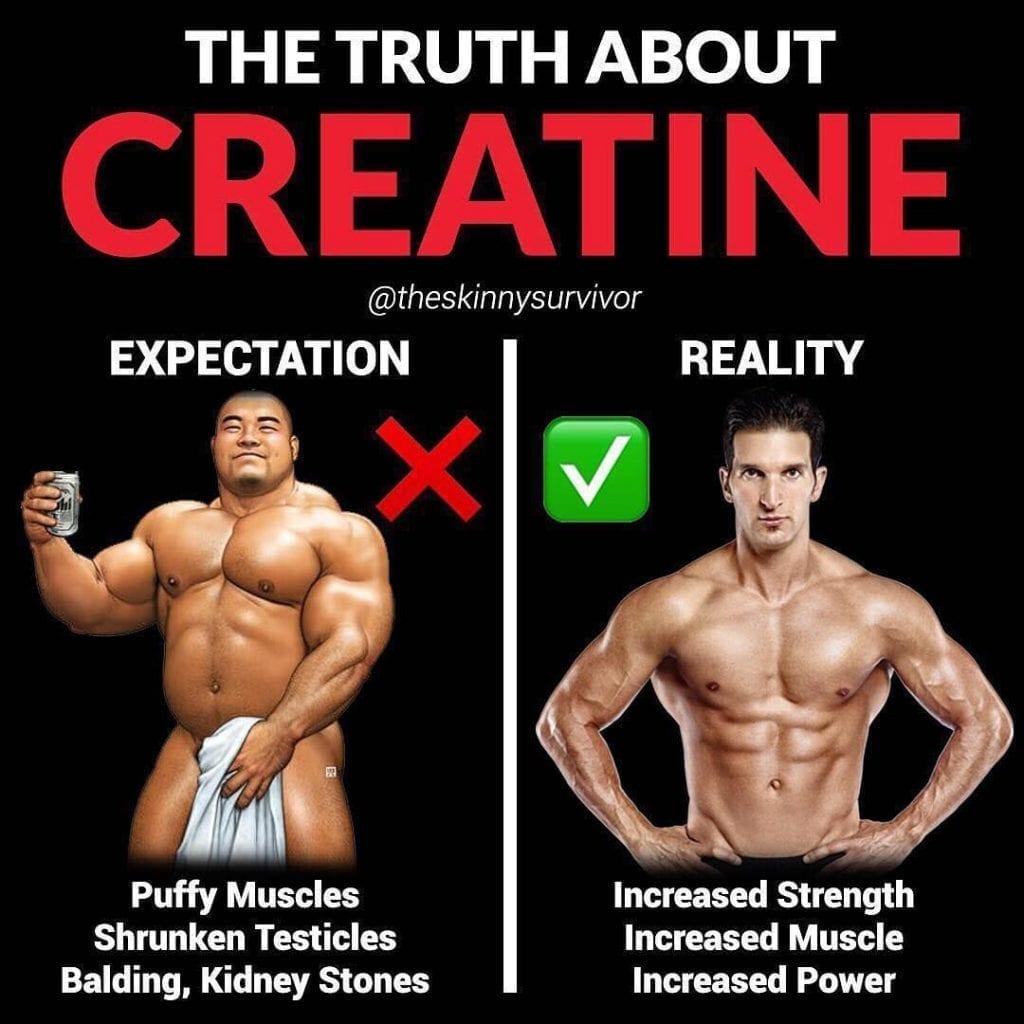 Water retention is one of the most discussed “side effects” of creatine.

Creatine is generally considered to make you look fuller but also more bloated.

But is this actually true…?

Well, facts are that contrary to popular belief, creatine does NOT make the body retain SUBCUTANEOUS water.

Instead, the water retention is in the muscle cell itself, which is not a side effect, but rather a pleasant, positive effect.

Water retention with creatine is a wide-spread myth, which probably aims to promote more expensive creatine supplements that “Don’t lead to water retention”.

Creatine itself doesn’t really make you look bloated, but if or when the bloat happens, it is probably due to an excessive intake of fast carbohydrates, and not the monohydrate itself.

If you go for a text-book intake of creatine, which is basically 5 gr pre and post workout, you really won’t have side effects.

As a matter of fact, not only is creatine safe for your sharp, lean and aesthetic looks, but it is also beneficia.

This is exactly why many professional bodybuilders don’t really cease creatine intake during their competitive season.

Is creatine a steroid? 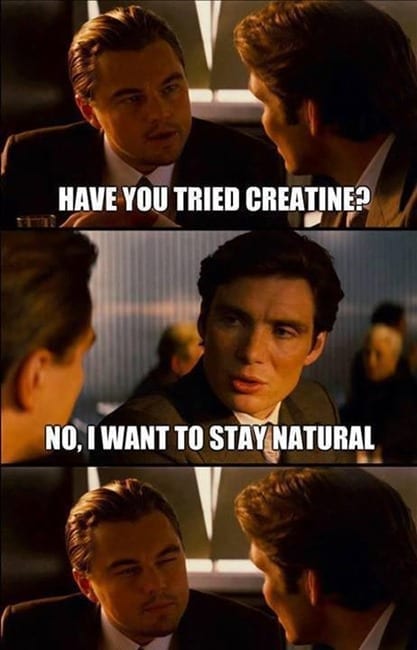 At one point your parents or some of your friends probably freaked out when they found out you’re supplementing with creatine.

“Wow bro, you are not natural anymore?”

Well, while many of you may think it is funny, it is in fact a common misconception about creatine.

The truth is, creatine is by no means an anabolic steroid.

It is rather a compound formed by 3 amino acids, which doesn’t really fit into the category of anabolic steroids, as it basically has zero effect on your endocrine (hormonal) system.

As we mentioned, all creatine is, is an energy storage of the organism.

There are many, and we mean MANY types of creatine.

Just to name a few:

Some creatine supplements are isolated forms of creatine, while others are combined in a flurry of creatines.

Needless to say, when you’ve got a dozen types of creatine, you start wondering which one to pick and which one would have the best effect.

The truth here is that the safest, best-researched form of creatine is namely the monohydrate.

There are other forms which have advantages, like increased water solubility, however, when it comes to the best bang for the buck, monohydrate remains king.

If however, your belly is sensitive, you can make a tad bit bigger investment and get creatine citrate.

Why do bodybuilders use creatine? 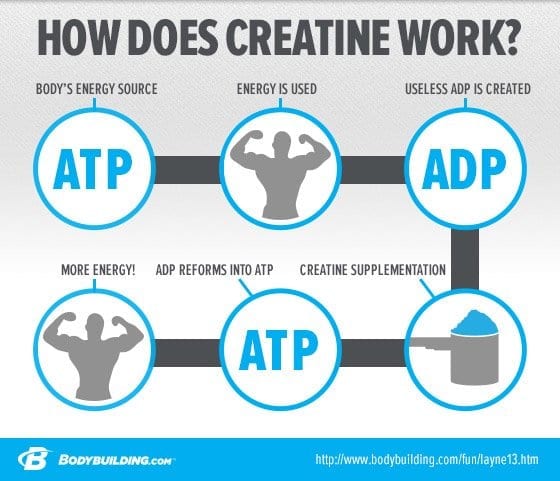 Alright, we now learned a bit more about this wonderful supplement.

So far, so good – We know that the body has 2 main sources for immediate energy, when it is required for intense muscular activity – ATP & CP.

When we supplement with creatine, the storages of creatine phosphate (CP) increase.

This in turn allows for more synthesis of the main energy molecule ATP, and hence, strength endurance is increased.

As you may or may not know, ATP fulfills the energetic demand of the musculature during its contraction.

When that energy demand is fulfilled and the ATP is broken down, we get a byproduct, called adenosine diphosphate.

Then, the body has to either regenerate ATP or cease muscular activity.

If available, the phosphate molecules from the creatine phosphate in the body, link with the ADP and regenerate ATP.

To say it simply, creatine as a supplement allows for more energy output during muscular activity.

In even simpler words – You will gain some fookin strength and be able to do more reps with a heavier weight, brah. 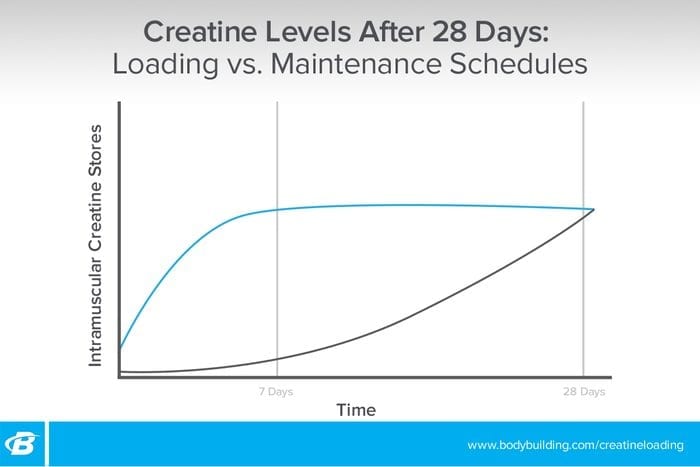 Odds are that this is not the first article about creatine that you’re reading.

Probably more than one of them has recommended the initial, loading phase with creatine.

But is that necessary?

Well, not really – The loading phase is not a determinant for successful supplementation.

The loading phase can be done, but all it will do is make your body load up faster, but that won’t necessarily have a significant impact on the end result.

If you decide to do the loading phase, the recommended amount is 0.3 grams of creatine per kilogram of bodyweight, for the duration of the first week.

After that, creatine intake can be sustained at a healthy 5 grams a day.

You should acknowledge that more than 5 grams a day will have no further effects, as this dose will fill up the creatine reserves of the body.

Well, we now know the functions of creatine, how it works in the body and what types of creatine there are.

The next question is – When should you take creatine? Pre workout? Post workout? Let’s find out what benefits the different options offer.

Generally, this is considered one of the better options, as the function of this supplement implies that it is best to load with energy before the workout.

That implies an increased ability to lift a certain weight repetitively and hence, create a bigger stimulus for growth.

This is also not a bad option, as the body has its own creatine reserves, meaning that if we deplete them, it will be hungry after the workout.

That way, supplementing with creatine after a workout will allow the body to suck up every single molecule of our creatine dose.

Does it really matter?

But does it really matter when we are going to take our creatine?

Well, truth is that the body stacks up creatine and its effect doesn’t solely depend on the timing of the intake, but rather the total stack we have generated.

While that sounds logical and may be true, a research of the international society of sports nutrition has concluded that the optimal time to supplement with creatine is after a workout

The researchers split them into test groups that tested 5 grams of creatine pre and post workout.

The individuals were also doing resistance workouts 5 times per week.

The research concluded that in all cases, creatine increased the amounts of lean body mass and strength.

Creatine post-workout was simply more optimal, as opposed to pre-workout.

That means that taking it with a meal rich of carbohydrates is one of the better option.

Now of course, we all have different biology, meaning that for some people, creatine may not be a good supplement choice.

That is because some people  just don’t respond to it, simply because the body has sufficient quantities already. 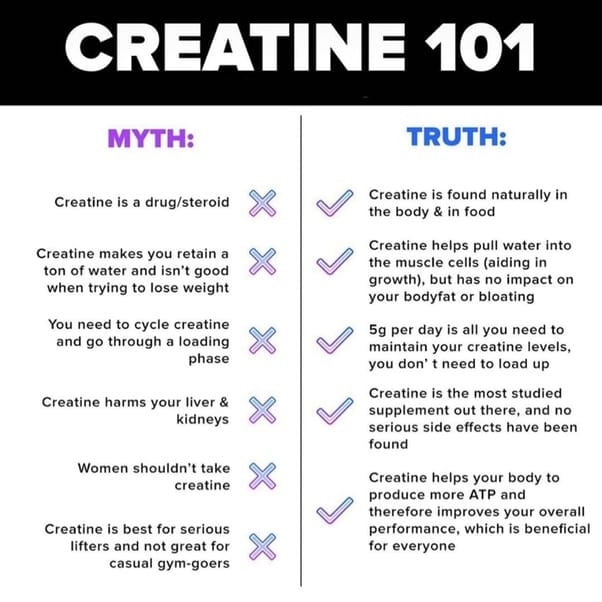 As we already mentioned, creatine is generally the safest supplement, when taken within the recommended amounts

There simply is no solid evidence that can back up the claim that creatine by itself causes damage in healthy people.

Yes, there are cases of people taking creatine and then reporting kidney issues.

However, correlation doesn’t mean causation, which simply for you means that creatine is more than likely safe for you.

Of course, some people’s biology won’t respond well to creatine, but the side effects experienced will be light and short term – Stomach ache, headache & nausea, at most.

Bottom line – Creatine is not toxic when taken responsibly, meaning it has zero side effects.

Well, some people in fact, report balding when supplementing with creatine.

As a matter of fact, creatine CAN increase hair falling, but only in people who are predisposed to hair loss.

In theory, creatine can increase the levels of DHT- Dihydrotestosterone.

Some studies have often linked high levels of DHT  to hair loss.

However, again, there is NO SOLID EVIDENCE that prove the effect of creatine on DHT levels.

This means that it is more of a myth, rather than absolute truth.

It is important to take notes of this article.

Creatine is one of the demonized supplements in the fitness masses.

However, it is completely safe for most people who are healthy.

That is simply because it is nothing out of the natural pattern – We produce our own creatine! Supplementing with it will just fill up the stores.

Creatine starts having an effect when it stacks up in the body, meaning that it won’t lead to drastic changes.

Your best bet, when you are looking for a quality product that is effective, is monohydrate.

However, if your belly is sensitive to monohydrate, you can resort to the slightly more expensive versions.

Those are more soluble in water.

Last but not least, the widely recommended daily dose is 5 grams.

Of course, we can go with the optional loading phase during the first week.

During that phase, you take 0.3 grams per kilogram of bodyweight.

Note that the loading phase won’t have a substantial effect on the end result.

Instead, it will rather just fill up the creatine reserves quicker.

1 thought on “Is Creatine Safe? – Everything You Need to know”