You’ve probably heard it at the gym or from your buddy at work. Some incredible new discovery about how often you should eat or how big your meals should be that will allegedly change the way your body burns fat virtually overnight.

Fasting is a big one right now. Eat whatever the hell you want, no matter how bad for you, as long as it’s just once a day and you’ll kick your metabolism into overdrive and get lean in no time.

Or maybe you heard the one about how our traditional western three square meals a day is just the worst thing ever. We should be chowing down seven much smaller meals throughout the day because it’s so much easier for your body to break these smaller meals down which increases your body’s natural fat burning ability.

That’s the problem, there’s so much advice out there and so much of it is completely contradictory. How is the average guy out there supposed to know what’s the real deal and what’s just nonsense?

Leave that to us. We’re going to cut though the bull and give you the real deal on meal frequency.

Sit tight because we’re about to bust a couple myths right now. But before we do let’s get one thing straight. Using a strategy of low meal frequency, also known as intermittent fasting (eating 1 meal per day) can reduce body fat. But this would purely be a function of taking in way less calories through food than your body is used to. Think of it as the brute force approach to weight loss.

Most of the other magical benefits of this meal strategy unfortunately fall a little short. For example, it is claimed that intermittent fasting can cause something called fat oxidation. Essentially fat oxidation is the process your body uses to break down the fatty molecules it has previously stored in your body to produce energy. This is a good thing.

Unfortunately the claims of increased fat oxidation through intermittent fasting don’t hold up under testing. After a 2 week trial by researchers at the University of Amsterdam reported that not only was there no effect on the breakdown of fat in the body, but no benefit to metabolism level either.

Another claim is that low meal frequency decreases insulin levels. Now insulin isn’t a bad thing in itself. It allows your body to use whatever glucose (sugar) you ingest and convert it into energy which is awesome. The problem is when you have too much insulin your body begins converting any extra carbohydrates it can get its hands on into fat. Not good. The problem with trying to lower your insulin levels with intermittent fasting, is that it unfortunately just doesn’t work.

A group of smarty pants scientists from Waseda University in Japan gave intermittent fasting a shot with lab mice. They discovered that eating one meal a day actually resulted in increased levels of insulin when compared to eating two meals per day. Imagine that. And even if intermittent fasting was a magic bullet to decrease insulin levels it wouldn’t even matter all that much before a later study indicated that insulin levels aren’t the only cause of fat loss.

The research is clear. Intermittent fasting may sound great on paper but there’s not a lot of actual evidence to support some of the largest claims from its proponents. Not only that, we haven’t even talked about the fact that maintaining a diet of one meal per day is incredibly difficult. And it isn’t simply incredibly hard to maintain. Research from the US Department of Agriculture indicated that individuals sticking to an intermitting fasting meal plan were more likely to eat more in the future, likely to compensate for their low food intake during fasting. So in the end this approach could end up putting you in our next category 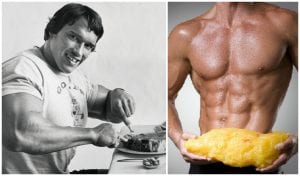 So how about the other end of the spectrum? Does eating many smaller meals throughout the day help with weight loss?

One theory is that is very popular is the appetite control theory. Basically, people claim that by spacing out many small meals throughout the day you can eliminate hunger. This is because your body is at least receiving something almost all the time even if it’s just a small portion. Researchers at the University of Colorado put that theory to the test. Their results demonstrated there were no differences in fat oxidation between a 3 meals a day plan and a 6 meals a day plan. Not only that, their study concluded that the “desire to eat” was actually higher among people who used a high meal frequency meal plan compared to an average 3 meals a week plan.

An alternative proposed benefit of high meal frequency is the idea of stoked metabolism. The way this one works is that by eating many smaller meals throughout the day your metabolism is always being kicked into gear because there’s always new calories being introduced into your body. Well unfortunately the University of Colorado debunked this one as well, no difference they said.

Another study, this time from the University of Ottawa, crushed these high frequency meal myths even further. They took 16 obese men and women and split them into two groups: high meal frequency and regular meal frequency. After 8 weeks on their individual meal plans they looked at the result and saw that both groups lost weight, but that there was no statistical difference between the high and low meal frequency groups.

So where do we go from here?

Listen, we’re not trying to be buzzkills by poo-pooing these two meal strategies. But we don’t want to send you down a futile path either. If you want to lose weight you don’t need to reinvent the wheel. Just keep focused on your caloric intake, food quality, and macro count. And of course remember to torch your bayd fat in the gym.

Alternatively if you a little extra help you can also enlist the help of a high quality fat burner. One of the big benefits of these babies is the appetite suppression factor. That doesn’t mean you should use them to jump on a low meal frequency meal plan (as we discussed above). But they can help crush those craving for low quality junk food and give you that extra boost of energy to get in the gym and push out those extra reps for maximum progress.