I have encountered many gym clowns in my time but yesterday I witnessed a buffoon of Young Thug proportions. (If you don’t know or haven’t heard of Young Thug be very thankful.) It’s not that I have never seen this idiots human peacock type of antics before. It’s just that I am a member of a private gym now and thought I was past the point in my life where I had to deal with such moronic behavior. 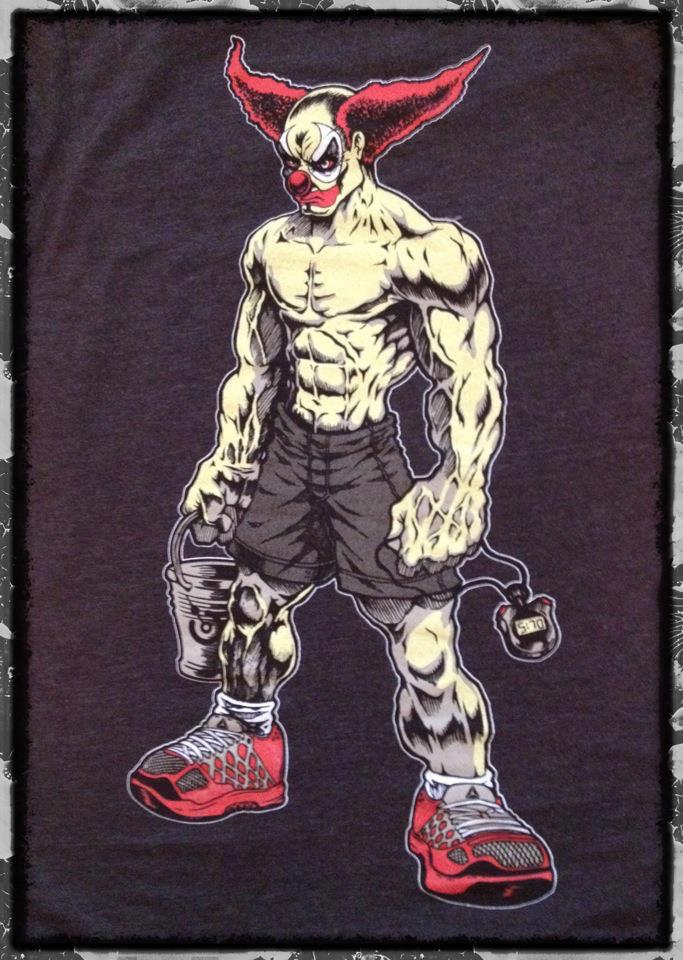 This guy hooked his Ipod to the gym radio and was blasting screamo music at full blast. Then he was doing chest flys with metal chains instead of dumbbells and he would scream as loud as he could after each rep. He followed each set by running a lap around the whole gym. Which is a basement gym with no such room to do such asinine maneuvers. Seeing this clown really brought up some memories of my days at a public fitness center. I’m sure you have seen these kind of people too. If not, you might be one of them. I’ll let you figure it out.

5 Gym Clowns Everyone Has Seen

Much like the guy i mentioned earlier who was bellowing his battle cry during each set, Mr. Intensity is the guy who is always pumped up. He snorts a line of pre-workout before every set and doesn’t know what rest period means. This guy comes in two varieties: Roided up freak or looks like he doesn’t even lift. Usually it’s the latter.

For some reason this idiot wants everyone in the gym to watch as he lifts light weight that he has no business bragging about. He screams, grunts, awfully raps out loud along to his music, or even takes his shirt off before a lift to get attention. The best way to handle this guy is to ignore him. As much as you would like to give him a Frankensteiner off of a weight bench, that’s what he wants. The attention that is, whether it be positive or negative. He just wants people to know he’s there. This guy most likely has a tiny penis and lives in his mom’s basement until he gets that manager position at the local Family Dollar which he happily tells strangers about. Don’t feed into this asshats narcissistic behavior. Don’t worry though, he will only be at your gym until he can afford to join a crossfit gym. Come on Family Dollar give this man a raise.

This is the type of guy who if he were a wild animal, he’d be the dodo. Meaning his stupidity and lack of self preservation will cause his ultimate demise. This guy uses awful form to lift weight that he cannot properly lift. He brags about how much weight he can squat and leg press but you know damn well that he isn’t even doing half reps. This is another guy who usually has a shit physique which just so happens to coincide with his “mysterious” injuries that can’t possibly be from improperly lifting heavy weights.

The ego lifter wouldn’t be so bad if he were just making a fool of himself, but this taint tickler likes to make it seem like you are weak compared to him. He brags about how much more weight he can lift than you and will even sidle up along side you during a lift just so he can lift slightly more weight. Like, you can be curling 35’s and he will come up and curl 40’s. Even though the motherfucker isn’t even working arms that day. It’s hard to ignore this guy since he

seems to use every piece of equipment you need and is always in your way. He’s a douche and he’s annoying. Luckily for you this kind of guy usually doesn’t make it to the gym very often due to injuries. He will also discover crossfit eventually so you will be rid of him forever once that happens. This guy is pretty much Yamcha from DBZ. He will talk a big game but he always ends up dead in a heap somewhere.

This fuck is usually an older guy who just loves to give you advice on shit you don’t need to hear about. “You should wear a belt when you deadlift or you will rip open your scrotum. You should never do cardio after leg day. Make sure you are drinking protein shakes before during and after all workouts.”

I can’t stand this sticky nutsack of a man. He never minds his own business and even worse, he doesn’t seem to ever actually lift. He never seems to actually do anything in the gym. It’s not like he’s somebody who use to compete in the Mr. Olympia back in the day. This fucking guy is an accountant and has looked the same his whole life. The last time he saw any gains was when his wife got knocked up by the Wesley Snipes looking dude who was putting in new carpeting in their house. Oh he tore that rug up something fierce.

The best way to handle the guy who has an endless supply of shitty advice is to quite literally whip your dick out next time he comes over. Just flop it right out and continue lifting like you don’t notice. He will either leave you alone or tell you about the secret dick lengthening technique he learned about from Ron Jeremy’s cousin Don Jeremy.

This guy does it all without actually achieving anything. He will hit the bench press, squat rack, pull up bar, and jump rope all within a two minute time span. He’s annoying because he gets in the fucking way constantly with his shitty, rushed exercises. He also uses ten pieces of equipment at once and will not be shy to tell you he’s using something when you go near it. This guy can be identified by his tight dri-fit shorts, long socks, fitness watch, headband, neon cross trainers, dri-fit shirt, and his can do attitude. The best way to deal with this guy is to give him a scorpion death drop in the steam room and leave him for the janitors to clean up.

This could also be the gym perv who stares at all the chicks but that’s just too easy. That’s why I’m picking on the ladies with this entry. This girl is a clown because she wears extremely revealing and pointless workout attire. She puts makeup on before her workout and only does exercises where there is a group of men around. She will squat it out in between two guys curling and will do lots of stretching. Even though you can see half of her boobs and her twat waffle is nearly falling out, she will make sure you know she is not a piece of meat to be ogled. You even look in this girls general direction and she will get quite pissy. Unless you are one of

the guys whose attention she is trying to get that is. Trust me when I tell you this, there are girls who go to the gym just to scope out dudes. I’ve known some women who have told me this.

The thing is though, having your tits hang out isn’t like a laser pointed at the person you are trying to attract. It’s more like a grenade blowing up catching everyone in the blast radius. You might get the guy you want to look at you, but you will also get all the middle aged fat guys attention too. The gym is for working out, not looking for a date. Take that shit to the Waffle House.

Author: Caleb James for BroScience, see more from him here