In the dawn of bodybuilding, starting in the early 20th century, things were quite straightforward – Bodybuilders back then were looking for a couple of things:

People back then relied solely on their work ethic, without heavy consideration of other things, such as supplements and steroids.

Well, we’re not saying there were no supplements and steroids back in the days of Arnold Schwarzenegger, but they were just not as emphasized on as they are now.

This is probably one of the reasons why the legends of the golden era are well into their older years and still healthy.

Furthermore, the fact they did not abuse steroids, ultimately accounted for a more aesthetic, naturally flowing physique overall.

When you look at the likes of Arnold, Frank Zane, Franco Columbu and basically every other bodybuilder from the golden era, you can’t help but just admire the proportions, size, leanness and symmetry.

Even though those guys were not as freaky as modern bodybuilders, they had it all.

And they managed to showcase it with their artistic posing too!

For today’s article, our goal is to shed some light on you and show you the very fundamentals, that the pioneers of bodybuilding laid down.

This includes but is not limited to training, nutrition and mentality.

So, without further ado, let’s take a look!

When was the golden age of bodybuilding?

The foundations of bodybuilding were laid in the late 19th century.

Eugen Sandow is considered to be one of the true pioneers, who popularized the sport of bodybuilding.

Bodybuilding as a sport was then succeeded by the likes of Reg Park, Steve Reeves and that ultimately led to the Mr. Olympia contest, which was won for the first time by Larry Scott, back in 1965.

Larry moved on to defend the title and win a second trophy in the next year, 1966.

From then on, new and big names started popping up in the bodybuilding world and they brought new, better physiques to the public.

The golden era of bodybuilding is best known for the period between 1960 and 1980.

Needless to say, back then life was different – There was no technology and people were active.

Instead of running on treadmills, they would run outside.

Instead of sitting at a desk all day, their work would involve actual, physcal labor.

The reason we’re saying this is because these habits simply led people to being naturally strong and whenever someone started bodybuilding, they would already have a decent foundation to build upon.

Back in the days, not only did bodybuilders look better, but they were also healthier – Not only because of the lack of heavy steroids, but because of the exercises they performed as well.

For example, two of the best oldschool exercises were the behind the neck shoulder presses, as well as the dumbbell pullover.

Nowadays, we rarely see people doing those and that leads to an array of injuries and stiff muscle groups.

So, what is it that happened during the last 60 years, that worsened the situation with bodybuilding?

Well, priorities changed, confusing researches popped up, people started focusing on things they don’t really need to consider that much.

Trainees forgot that the best results are achieved when you stick to the basic principles in the long term.

And so for example, while old-school bodybuilders would look for optimal ratios of size, symmetry, proportions and leanness, trainees nowadays only look for big arms, shredded abs and a good bench press maximum.

And so, by deviating from what is actually important, trainees start focusing on useless things which ultimately lead to slower gains, both in terms of muscle mass and strength.

It seems that the old-school, basic workout programs were deemed useless, which is exactly why people in the gym nowadays try and do complex, fancy workouts, with expectations of quicker results 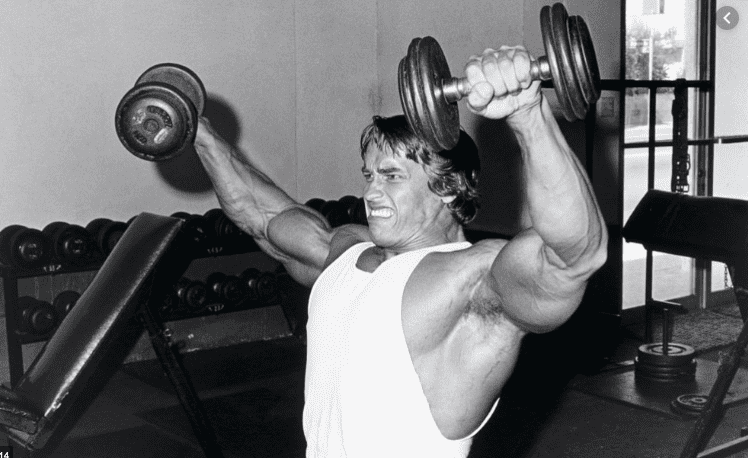 So, what is it about oldschool training routines that allowed bodybuilders back then to reach such amazing feats of muscular development?

The answer is – Hard ‘effin work.

Bill Pearl is the prime example for a perfect golden era physique, that was built through countless, heavy workouts.

Bill’s feats of strength were amazing:

Can you picture that ? Bill Pearl was not even that heavy. At a weight of about 100 kilograms, he could lift 2 to 3 times his own bodyweight, depending on the exercise.

So, yes – While nowadays we have an abundance of supplements and steroids, that can help enhance the physique, back then it was different – People were mostly relying on hard, heavy workouts to get the job done.

There were really no fancy exercises and routines like there are now.

Instead, bodybuilders would focus on the basic, compound movements and go all-out on them.

Now, the best training routine is strictly individual, which is why we won’t give you specific workouts, but rather guidelines that will help you create YOUR best workout:

Let’s start off with the exercises.

Below is a list of all the old school exercises which we highly recommend:

Note – Exercises with non-specified equipment, can be done with either barbells or dumbbells.

Full body workouts have been proven times and again to be a viable tool for optimal muscular development, whether you’re a beginner, intermediate or even advanced.

Some bodybuilders from back in the day swore by the effectiveness of full body workouts, with one of the main people being namely Reg Park.

Now, full body workouts have their disadvantages, and that is mainly the fact that they take a lot of time and they don’t allow for much exercise diversity.

However, if you are a beginner who is just laying the foundations of a well-developed physique, then you should consider utilizing full body workouts to kickstart your strength, strength endurance and exercise execution.

Generlly, full body workouts are done 3 to 4 times a week, as we would need about 48 hours to recover optimally between the separate workouts.

If you feel like full body workouts just don’t cut it anymore, then you should highly consider splitting up your muscle groups.

First off, it would be good to separate the upper and lower portions of the body, by utilizing the following split:

This simple yet effective workout will allow you to train each muscle group at least twice weekly.

What this means for you is that the musculature will always be either recovering or being worked on.

No empty spots will be left and you will always progress.

If you need to further emphasize on weak spots or certain muscle groups, then you should give the 3-day split a try.

The 3 day split implies training 3 days in a row, then resting 1 day. This again allows you to train each muscle group twice a week, which leads to more recovery and hence, gains.

How to structure the 3 day split? It depends. Let’s take a look:

And so, if you’ve been bench pressing more than you’ve been squatting during the past year, odds are your chest will be superior, when compared to the leg department.

That is exactly when it would be good to objectively look at your physique and initiate a new training split, where your weakest group, the legs are placed on day 1.

This basically implies priority – Placing your weaker groups first in the split and in the workout.

The goal with the training split you choose is to allow each muscle group to always recover.

If you go for the typical bro-split, where you train your chest only on Mondays, that would leave HUGE gaps.

Why? Well, because training a muscle group just once a week is simply not optimal.

If you train chest on a Monday, it would recover completely by Thursday at the latest, and then there will be a period of 3 days (Friday, Saturday & Sunday), where the muscle will be neither working nor recovering.

And even though such a split may work in the beginning of your training career, that’s how you get sub-optimal gains in the long-term.

Numbers of sets and repetitions

This is just another point of training that people get wrong. The optimal number of sets and reps depends, but there are indeed general guidelines:

Again, this varies, but here are recommendations:

Ultimately, we advise you to experiment with the number of sets – See how many sets you can do, without sacrificing the intensity (weight), then keep that number and work your way up.

We generally recommend the following rest times between sets and exercises:

With strength training, we need longer rests, simply because heavier weights put a bigger strain on the central nervous system, which then logically needs more time to recover between the separate bouts.

Unlike strength training, hypertrophy training at 70-85% of your maximum strength capabilties, is not as strenuous for the central nervous system.

That is probably because intensity levels of 85% and above are only possible for the body, due to the increased frequency of brain to muscle signals via the Central nervous system.

With this type of training, 90 seconds between heaviest sets is enough, but then again, we can start shortly before we feel 100% recovered.

As we mentioned, while we’re shredding fat, our goal is to go for lighter weights, higher repetitions and away from failure.

We stay away from failure just because intensity by nature is constructive and stressing, meaning we will probably have sub-optimal recovery, given that we’re on a deficit of energy, required to lose fat.

Lowering the rest times during the shredding period will allow us to lift more total weight for less time (bigger density of the workout), which in turn, will grant more nutrient-rich blood going to the musculature.

That will therefore optimize the lean muscle retention and will further help us achieve a harder, more vascular look.

Besides training, nutrition nowadays is another aspect of fitness that is big time effed up.

Again, people deviate from what’s actually important and instead of creating sustainable habits, they are looking for the next easy solution or magic.

The best known bodybuilder of the golden era, Arnold Schwarzenegger, says the following:

Arnold would also advise you to get your proteins mainly from animal products, such as eggs, meats, fish and dairy, as they have the full amino acid profile, which is crucial to proper recovery.

Back in the days, most bodybuilders would eat about 6 times a day- 3 big meals and 3 snacks.

Even though there was not an abundance of supplements back then, builders would get some shakes in.

A classical example for a protein shake, that would replace a snack, is the following:

Arnold would blend all of this in a mixer and drink it, to grant his body quick and easy protein.

Back in the day, bodybuilders considered the body to be a canvas and bodybuilding to be a form of art.

This is exactly why the likes of Arnold and Franco would work with ballerinas to help them perfect their posing routines for the upcoming bodybuilding shows.

Furthermore, posing was also used as a form of workout, as the isometric contractions help bring detail to the muscle.

At the bottom of this article, we have attached a video of Arnold’s INSANE posing skills.

Fortunately enough for us, bodybuilders from the golden era made sure to leave a legacy, which is exactly why many of them have written books on training and nutrition.

Here are our top 5 recommendations: 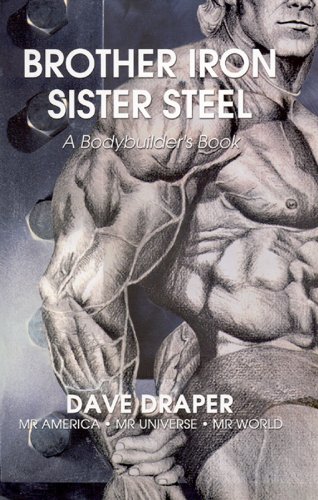 Not motivated yet? Check out Arnold’s posing.