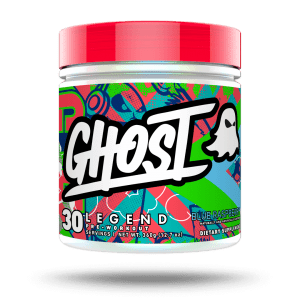 Before we get down to the serious detail in this Ghost Legend review, let me put something to you.

Ghost is not your standard bodybuilding supplement brand. The usual images of totally shredded guys in the gym are replaced by models, fitness gurus, and Love Island stars posing in front of “on fleek” graffiti walls.

The issue is—can they be taken seriously?

You, know what I’m saying, yeah?

Can the Ghost Legend pre-workout achieve these results?

You’re going to find out.

This Ghost Legend review exposes the whole gritty story behind this product—explaining what it is, how it works, and most importantly—whether it’s effective.

If you want to discover whether this is a serious supplement for the hardcore gym animal—or one for the snowflake generation—read on!

So, let’s start off this Ghost Legend review with a quick look at the product and brand itself.

Ghost Legend is a pre-workout—designed to enhance all aspects of your training—including elevating energy, boosting pumps, increasing endurance, creating focus, and speeding up recovery.

So far—pretty much the same as any standard pre-workout, right?

Ghost is not your typical supplement manufacturer.

The guys (and girl) behind it concentrated on creating a brand that’s more 21st-century lifestyle oriented than bodybuilding focused. Their mantra is “be seen”—which I’m hoping is intentionally ironic, considering they’re called Ghost.

Aiming to build a Ghost “fam”—in addition to the 11 supplements, they sell branded baseball caps, camo hoodies, and shakers—you get the idea. What’s more, their website is full of videos of the “crew” doing street stuff and promoting their laid back “vibe”.

The “dope” bros (and sister) behind this product are:

You’re getting the idea now, right?

To be fair, Christian Guzman, the main “face” for Ghost, does have a little pedigree. Back in 2012, he was already creating YouTube videos, providing tips and guidance on weightlifting (they’re pretty good). He now has virtually 1M followers on both YouTube and Instagram.

Many people comment that his weightlifting info is so detailed it verges on the point of being boring—which is kind of underhand praise.

What’s more—he’s pretty business savvy. Guzman has his own apparel brand (Alphalete Athletics) and is the founder of 3D drinks.

Is this pre-workout all image and no substance? Can it possibly be the best pre workout 2019?

Let’s take a look in this Ghost Legend review at how it apparently works.

How Does Ghost Legend Work?

For me, this supplement functions pretty much the same as many other common pre-workouts. It would be nice to say in this Ghost Legend review that it has some amazing novel features I’ve never seen before.

What I’m trying to say is this.

If the product can achieve the impressive claims it makes and does it better than other similar supplements—then it deserves some recognition.

That’s how this pre-workout, theoretically, functions. Remember, this is a review for Ghost Legend not a Ghost Pump review—a totally different product.

Now, down to the truth.

Join me in exploring the ingredients in the next part of this Ghost Legend review.

Does it have the engine under the hood?

You may be part of the Ghost “fam”—but will you be taking your training to unprecedented levels?

Ghost claim that their pre-workout contains twice the amount of the “stuff,” compared to other competing supplements. Above is the Ghost Pre Workout nutrition label—let’s see if that’s the truth, as we check out the ingredients in this Ghost Legend review.

These are both excellent ingredients to have in a pre-workout—and function in very similar ways.

Both citrulline and agmatine elevate nitric oxide production, which, in turn, increases blood flow to the muscles by dilating the blood vessels. This results in impressive pumps, raised endurance through oxygenation, and faster muscle-building by efficient nutrient delivery.1 2 3

Firstly, the claim that Ghost Legend contains “2 x” the ingredients compared to other pre-workouts is trash. With a combined total of 4500 mg, that’s less than the 6000 mg often found in the most potent and best pre workout.

Secondly, as agmatine and citrulline work on similar cellular paths—there’s a convincing argument that supplementing with both doesn’t increase the efficacy.

You’ve felt the lactic acid build-up in your muscles during a monster session, right?

This reaction (often due to insufficient oxygen delivery) creates pain, increases fatigue, and can cut your reps short.

Beta-alanine is proven to inhibit this build up—therefore allowing you to lift longer and harder.4

As you can see from the Ghost Pre Workout nutrition label, there’s 2000 mg of beta-alanine in this pre-workout. It’s a pretty standard dose—which will be effective, although it could be higher. But again, it’s definitely not double what you would find in most supplements.

First the (kind of) bad.

With a total combination of 215 mg of caffeine (165 mg anhydrous, 50 mg malate)—it’s certainly not twice the amount of other supplements—some can contain 300-400 mg.

But, that’s not altogether a disadvantage.

Caffeine is a great stimulant and cognitive enhancer—but too much can cause unwanted side effects. In this dose, it’s unlikely to create any issues. What’s more, both malate and taurine have both been shown to alleviate the downsides of caffeine.5 6

Additionally, studies have shown that 200 mg is all that’s required to improve athletic performance.7

Studies have illustrated that even with 200 mg of Alpha-GPC (per day), no improvement in cognitive performance was seen. While research has indicated that it can boost power and strength—this was most effective with doses of 600 mg and above—anything less than 250 mg had no effect at all.

Ghost Legend includes 150 mg—so its effects would appear to be minimal at best.8 9

So far in this Ghost Legend review, it appears that the ingredients in this pre-workout are average.

I know what you’re thinking.

What exactly should a potent and effective pre-workout contain—one that would be considered the best pre workout 2019? To make it easy, I’ve listed below the essential ingredients you should be looking for—to take your training off the damn scale.

Containing only three of the best eight pre-workout ingredients—this Ghost Legend review has shown it’s not one of the best.

Ghost Legend Vs Other Pre Workouts

You’ve already seen in this Ghost Legend review that its ingredients don’t match those included in the best pre workout. But, what if we compared them to other popular products in the performance-enhancing market?

Lit pre workout is a clear winner—containing higher doses of beta-alanine (3.2 g), and caffeine (250 mg). It also includes the ATP boosting creatine—although whether this is actually required in a pre-workout is contentious.

4 Gauge is much more powerful, with a phenomenal 6000 mg of citrulline, 100 mg of Rhodiola, and includes the previously mentioned essential carnitine—lacking in Ghost Legend.

When compared to other popular pre-workouts in this Ghost Legend review—it falls short—not living up to its claim of containing twice the dosage of its competitors.

No Ghost Legend review would be complete without detailing the downsides of taking this pre-workout.

Most side effects witnessed appear to be caused by the caffeine content—although, as it’s in a low dose in Ghost Legend, these side effects are rare.

Ghost Legend Before After Results

It’s not just my opinion in this Ghost Legend review that’s important—a greater judge of its efficacy is what users are seeing.

As a pre-workout, it should enhance training, endurance, and power. But does it?

Here’s what customers had to say in their own Ghost Legend review.

“Just the right pick me up before a hard workout.”

“Wakes me up and gives me the extra boost I need.”

“It just didn’t give me a pump at all…I got no energy from it.”

“No real boost in energy, no noticed recovery changes.”

“Never saw any advantage more than I get from coffee.”

So, It seems that Ghost Legend is simply not powerful enough.

Where to Buy Ghost Legend?

If, after reading this Ghost Legend review, you decide it’s your ideal pre-workout—it’s available from the official Ghost Lifestyle page, GNC, luckyvitamin, and HP Nutrition.

I began this Ghost Legend review asking whether it’s a powerful pre-workout for the hardcore gym animal.

Despite its claims as being severely effective and having twice the potency of its competitors—if anything, it’s weaker.

Important performance-enhancing ingredients are either omitted or underdosed. Ghost Legend’s only plus point being it has sensible levels of caffeine.

Here’s the bottom line in this Ghost Legend review.

If you’re after social media socializing, fancy a branded baseball cap, and want to feel reassured by the vibe from your “squad”—then Ghost Legend is ideal.

If you really want to take your training to the absolute limit and see fast and astounding visible results—take one of the best pre-workouts that contain all the ingredients I listed earlier.

“How to Take Ghost Legend?”

Mix one scoop with six to eight ounces of water prior to training.

“How Much Does Ghost Legend Cost?”

While safe, it may cause some side effects, such as headaches, nausea, and the “jitters”.

“Where Can You Buy Ghost Legend?”

While some guys see some energy improvements—many more witness no results at all. Online Ghost Legend and Ghost Pump review say much the same.

“Who Is Christian Guzman?”

The “face” behind the Ghost Lifestyle brand. He’s a popular YouTuber, user of Instagram, and fitness entrepreneur.

Ghost will refund 100 percent of your money if you return the product unopened within 15 days of purchase.

“How Long Do You Have to Take Ghost Legend Before Seeing Results?”

Some say they’ve seen results within 30 minutes of initial consumption. Others have used an entire container and seen no improvements in training at all.

Ghost Lifestyle currently only deliver to the US and Canada.