Increasing vascularity is one of the best ways to make yourself look and feel stronger.

While most people feel that six pack abs are the ultimate sign of being shredded, having vascular arms also ranks pretty high – and it’s visible even when you are wearing a shirt.

We all know that veins play an important role in the body by transporting blood to the various areas that need them.

Getting them to show however takes a lot of work for most of us.

Some guys have great genetics and have vascular arms even though they have never touched a weight in their life.

Unfortunately for us normal guys this is not the case, however it is possible for every guy out there to get visible veins if he has the right plan of attack to achieve it.

In this article we will discuss how you can get a more vascular body and arms that make you look more impressive even when wearing a t-shirt! 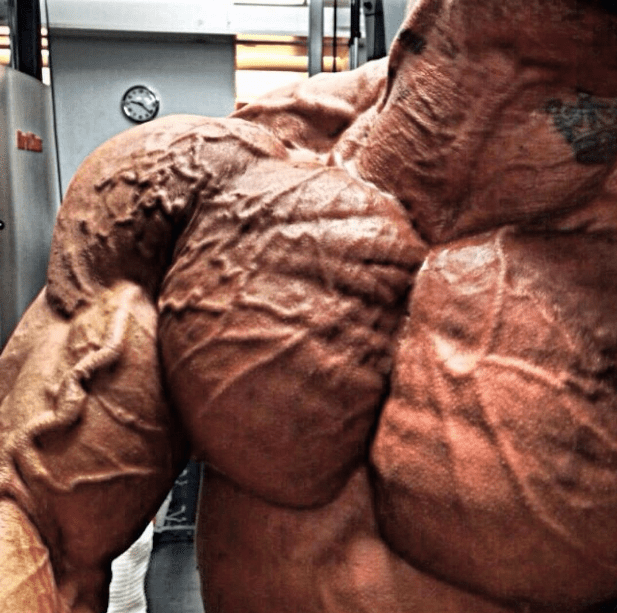 When you see someone that is highly vascular you know they are putting in a lot of work to look that way.

In order to achieve that look you really have to keep your body fat under control. As we put on fat it lies on top of our muscles underneath the skin.

As this layer of fat gets thicker we have less visibility of the veins.

Therefore if you really want your veins to pop you need to get that body fat percentage to under 8%.

When you reach that level there is so little fat covering your veins that you can really see them pop and the separation between each muscle becomes highly apparent.

Some guys are lucky enough to have great vascularity even as high as 12% body fat.

If you are one of those people you should still aim to get into single-digit body fat as that will give you the best look.

Remember that some people are genetically predisposed to having protruding veins while others are not.

What also plays a role is where you tend to store fat. If you store it mostly on your stomach and not on your arms then you will be more vascular in that area.

At the end of the day nobody can control their genetics – you can only work around them. If you have a hard time getting your veins to pop you just need to keep dieting down and training hard.

Can you Increase Vascularity through Training?

If you have ever got a solid pump during an arm workout you probably noticed you were a lot more vascular than usual.

While this definitely looks badass it’s unfortunately only temporary.

Training at lower reps definitely helps build muscle but wont give you as much of a pump that leads to veins popping out from the skin.

The only way to sustainably increase vascularity is to reduce your body fat percentage.

Having said that, you definitely want to make sure you have the muscle mass to back it up.

We’ve all seen those skinny guys that are vascular but have no muscle mass – it doesn’t look good. Focus on building muscle first then vascularity after.

Let me ask you a simple question..

Who could say not to a more vascular body and more veins?

If you’re seriously interested in getting more vascular this what we are about to discuss right now might interest you.

The secret to get more vascular instantly is #1 lowering body fat and #2 eliminate water retention.

If your body is holding a lot of water your veins won’t show as well.

So you are probably asking “How can I quickly, safely remove un wanted fat and excess water in the body”?

I am going to reveal a tactic that is well known and has worked for centuries.

If you consume a lot of water 2-3 gallons of day your body will naturally flush the excess water you are holding in your body.

You must consistently drink this amount for a few days eventually your body goes into “flushing mode” to get rid of the excess water your body is holding.

You also have to make sure your metabolism is firing and that you are burning off that extra layer of fat you are holding.

By taking in ingredients that:

You will be able to lose fat and water weight in days instead of weeks.

So if you are truly serious about losing water weight and fat I would suggest that you include these potent ingredients into your diet.

Some of the best fat burning supplements contain these almost magical ingredients and they will help you get that vascular body at the speed of sound.

Discover these powerful ingredients in our completely free report on the best fat burning supplements & ingredients to get rid of fat.