Forget about Seth Rollins, The Rock and Shawn Michaels—back in the early 1900s, the ultimate superstar of wrestling was George Hackenschmidt.

Currently holding a place in WWE’s (World Wrestling Entertainment) Legacy Hall of Fame—Hackenschmidt’s contribution to the growth in grappling’s popularity is well-recognized.

However, less familiar are his contributions to weight training, sports philosophy and psychology.

Come with me, as I explore the insane history of this muscular behemoth—and the shocking revelation that even today, he’s influencing your weekly workouts. 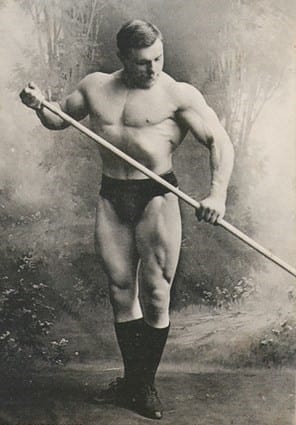 George Karl Julius Hackenschmidt was born in Tartu in the Governorate of Livonia in 1877 to Estonian and Baltic German parents.1.

It was at school (the Realschule of Dorpat) that Hackenschmidt’s interest in physical training began. Discovering the free weights in the gymnasium—he found pleasure in pushing his body to the limits when free from academic lessons.

Documents report that after just a few years, his teachers were amazed by his feats of strength. Whether truth or urban myth—some of his contemporaries even declare they witnessed him lifting a small horse off the ground.

In 1895, George Hackenschmidt graduated from school and joined the Lausmann engineering factory in Tallinn (then Reval)—to work as a blacksmith’s apprentice. However, he found that during this time, his desire for strength and wrestling fame was growing—and his interest in manual labor subsiding.

So, in 1898 Hackenschmidt made a life-changing decision. He left Tallinn and ventured to St Petersburg to join its Athletic and Cycling Club. His trainer, Dr. Vladislav von Krajewski, saw George’s potential—telling him he had the ability to become the strongest man in the world.

Under this tutelage, he progressed rapidly through the wrestling ranks—winning the French championship in 1898, the Russian in 1899, and finally becoming World Champion in 1905.

In addition to his awesome physique and good looks, George Hackenschmidt was a popular guy. Intelligent, philosophical and softly-spoken—he was sought-after in elite social circles. Even the President of the USA, Theodore Roosevelt, exclaimed:

“If I wasn’t president of the United States, I would like to be George Hackenschmidt!”

George Hackenschmidt remained World Wrestling Champion and undefeated for three years—that was, until he met his nemesis. 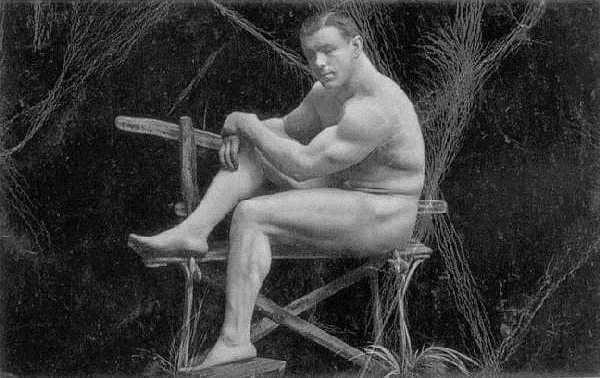 Despite Frank Gotch being a winner of the American Heavyweight Championship—Hackenschmidt considered him, and the USA division, inferior to European wrestling standards.

As such, it’s reported that he completed little training in preparation—which was to be his downfall.

Gotch’s stamina won him the match after an incredible two hours of wrestling. However, at one point the American punched Hackenschmidt on the nose—but the referee ignored his protestations.

After he lost the title, George Hackenschmidt demanded a rematch—but this did not occur for a further three years.

In 1911 they met again—but Hackenschmidt had an injured knee. Years after the event, the American wrestler Ad Santel confessed he had been paid $5,000 by Gotch’s management to hurt George’s leg in training before the title fight.

With a determined Gotch targeting Hackenschmidt’s knee at every opportunity—the Estonian was quickly defeated in just 20 minutes.

However, upon his retirement, he had competed in 3,000 wrestling matches—losing only two.

Hackenschmidt’s influence is evident every day in gyms worldwide. He invented the now standard hack squat and history credits him with popularizing the bench press

After wrestling, Hackenschmidt still performed in some strongman exhibitions. But increasingly, his attention was directed to becoming a sports ambassador, author, and public speaker.

During his later years, he taught physical education to members of the House of Lords and was a judge in Mr. Universe competitions.

He became a British citizen in 1946, living with his wife Rachel Marie in the UK until his death in 1968. His memorial is in West Norwood Cemetery, London. 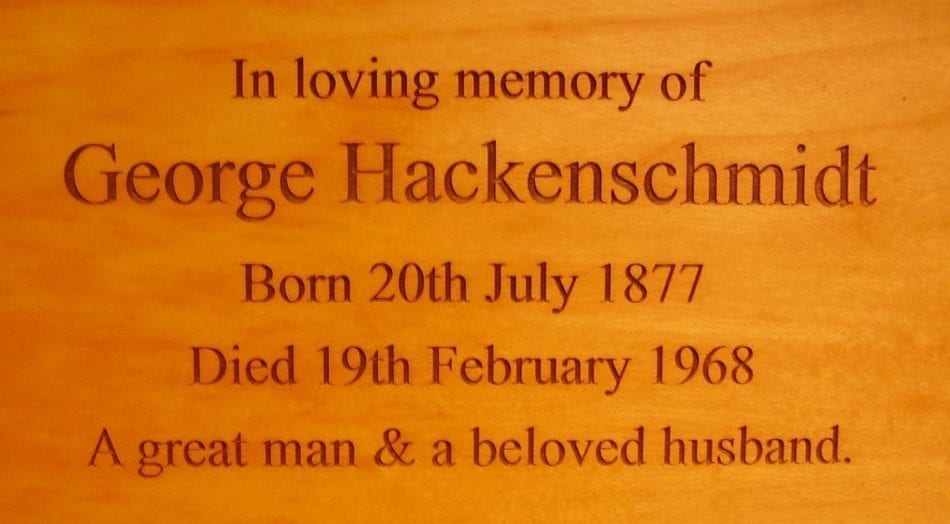 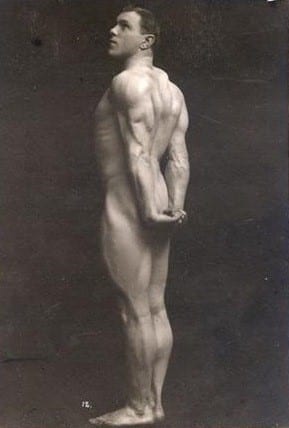 Despite his immense power—some aspects of George Hackenschmidt workout will seem unfamiliar to modern-day lifters.

Unsurprisingly, he advocated the use of hefty loading as opposed to bodyweight exercises, saying,

“A man may secure…a condition of fair physical fitness by means of exercising without weights…but, he cannot hope to become really strong—unless he exercises with weights.”

However, where many of us workout to failure—this isn’t recommended in the George Hackenschmidt training style.

“Do not perform any exercise to excess, so as to tire yourself out. If you feel tired and exhausted, give yourself the necessary rest.”

Furthermore, George Hackenschmidt wasn’t an advocate of the current chest, arm, and leg-day breakdown. For him, working all the muscles, every day, was the key to ultimate strength.

“Exercise all the muscle groups…on three or four days every week, or on six days if time allows.”

Finally, the George Hackenschmidt daily routine must include cardio.

“A man should…combine these exercises with running, skipping, jumping and gymnastics—in order to similarly develop his activity and agility.”

Following these guidelines, I have formulated a typical workout below. In true George Hackenschmidt fashion, you should follow this plan for six days per week—and it should take no longer than 30 minutes.

Remember—you’re not training to failure. Instead, select a weight that you can lift in each exercise for ten repetitions—but in week one, you will only complete five. Every week, add one extra rep until you reach ten.

Then, for subsequent weeks, increase the weight by, say, 10 pounds (or whatever you can now lift for 10 reps) and begin the program again—starting at five.

Here’s a great video exploring the teachings of George Hackenschmidt. 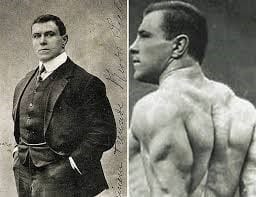 Predominantly, the George Hackenschmidt diet is vegetarian-based. He believed that it was extremely difficult to obtain meat from “healthy” animals—that is, those who lived in natural surroundings and weren’t intensively farmed.

“A fare which consists of three-quarters of vegetable food and one-quarter meat would appear to be the most satisfactory.”

He promoted following an eating regime that concentrated on fruits, whole grains, nuts and vegetables—avoiding cooking where possible as he believed foods lost their nutritional value.

Despite his aversion to meat—he seemed less concerned about dairy—with many of his contemporaries stating that he drank up to 11 pints of milk per day.

Here’s how a typical bodybuilding George Hackenschmidt diet could look:

Here’s an engaging photo-reel video of George Hackenschmidt—showing what you can achieve through healthy eating and training alone. 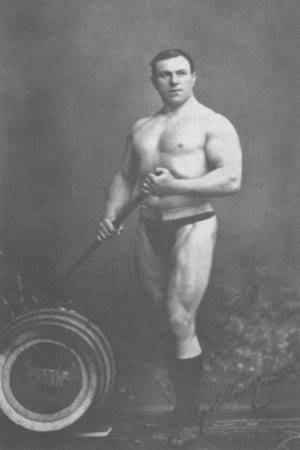 Was George Hackenschmidt on Steroids?

No. George Hackenschmidt was as natural as they come.

Hence, this was nearly 50 years after Hackenschmidt was competing. While only conjecture, it’s unlikely he would have juiced even if they were available. His aversion to “unnatural” meats and affection for nature is displayed when he says,

“I believe I am right in asserting that our Creator has provided food and nutriment for every being for its own advantage.”

George Hackenschmidt Before and After

Few images exist of George Hackenschmidt before he became famous—making it difficult to track his muscle gain progress.

However, he became French champion in 1898, just three years after leaving school. While he was no doubt reasonably muscular during his academic years, it’s unlikely that he would have been the size required to become win a national competition.

Hence, it’s a safe assumption that the majority of his wrestling bulk emerged during a 36-month period.

What can be determined—is that he remained in incredible physical shape for a long time. The photos below were taken respectively circa 1900, 1906, and 1940. 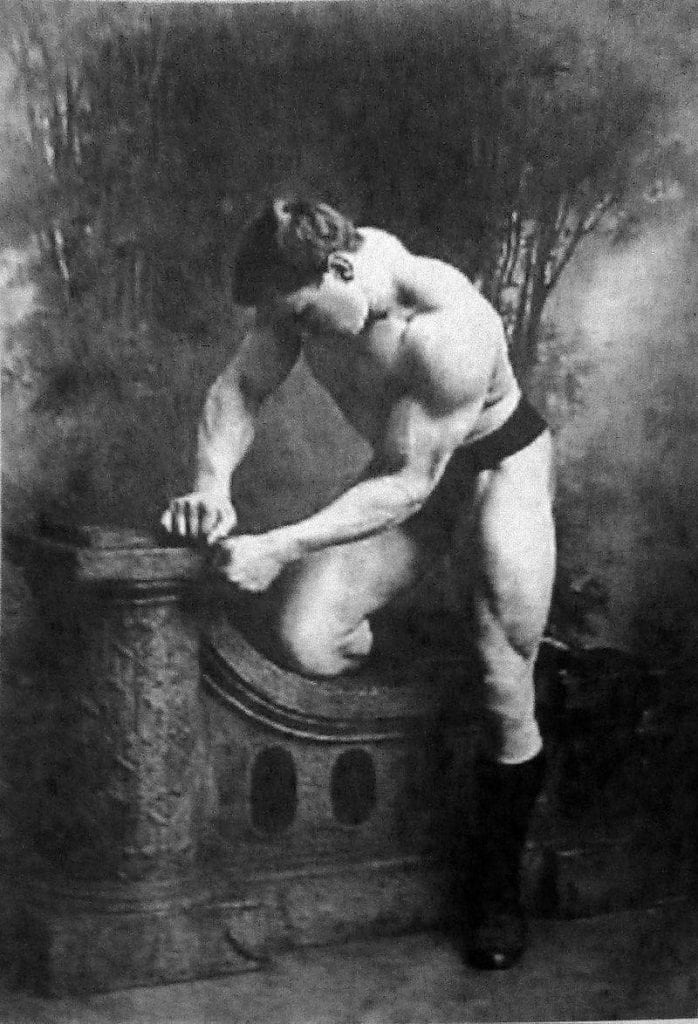 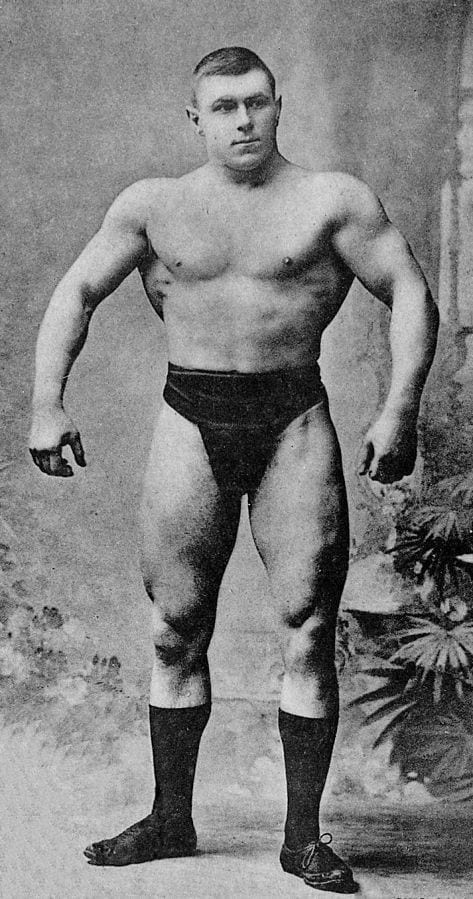 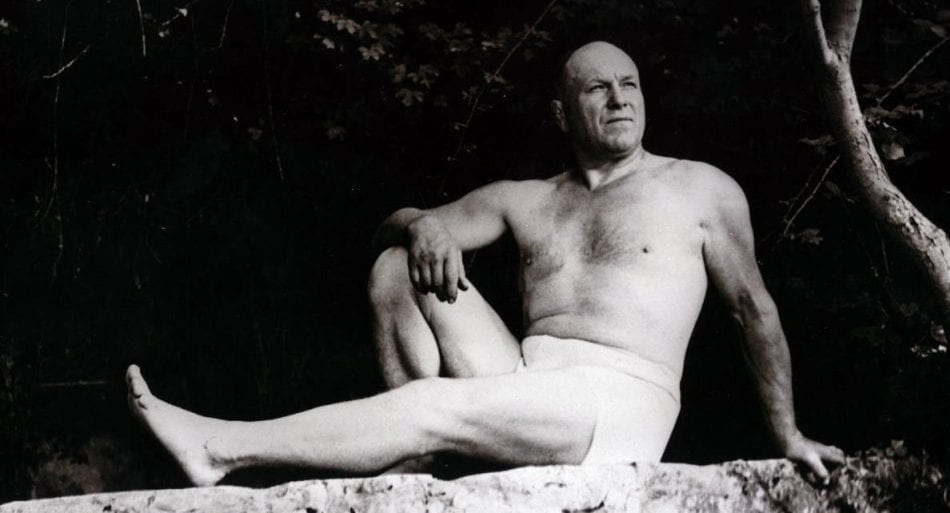 While considered a modern tradition, nutritional supplements did exist while George Hackenschmidt was competing. The first regulation of these products occurred in 1906 with the introduction of the Federal Food and Drugs Act.3

However, even in the George Hackenschmidt The Way to Live book—despite explaining in depth the importance of nutrition—he doesn’t refer to the use of supplements.

Hence, you can probably assume, in line with his whole-food ethos—that he received all his macros, minerals and vitamins from food only.

As a prolific writer and bodybuilding visionary, there’s no shortage of his pearls of wisdom. Here are a few examples:

“The majority of men today are relatively weak—whereas the struggle for existence demands now—more than at any previous epoch—that we should all be strong!”

“The frequent employment of one’s will power masters all organs of movement and trains them to perform feats which otherwise would have been difficult, painful and even impossible.”

“If the man becomes independent and self-reliant—he will never be a coward, and, when real danger threatens, he is the one who is looked up to by others.”

Finally, a genuinely majestic quote that applies to all of us demanding the perfect physique:

“Do you want to become strong?

Certainly!—you will answer…that is my wish.

You must want to—in other words, you must act.” 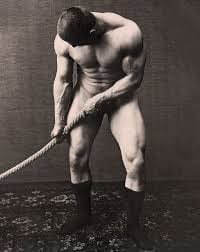 “Is There a Video of George Hackenschmidt Tearing a Penny in Half?”

Unfortunately not, although this was allegedly performed in exhibitions to demonstrate his strength. The 1905 image illustrated earlier in this article is George Hackenschmidt completing this feat.

“Who Was the Winner Between Frank Gotch vs George Hackenschmidt?”

Gotch and Hackenschmidt met on two occasions (1908 and 1911)—in both matches, Frank Gotch emerged victorious.

“What Are the Titles of the George Hackenschmidt Books?”

I hope this brief George Hackenschmidt wiki has given you an insight into this legendary athlete’s life.

His feats were nothing short of extraordinary—two defeats in 3000 matches, inventing exercises we use today, and the insane 275-pound overhead press.

However, personally, I believe there’s a more significant achievement.

Hackenschmidt illustrated it was possible to attain an astounding physique, with just a few exercises, dedication, and diet.

All achieved without steroids or modern gym equipment—just barbells and dumbbells.

As Hackenschmidt said—all you require is the resolve to become a stronger and bigger guy.

“You must want to—in other words, you must act.”