Three-time Mr. Olympia, famous for scrupulous focus on body-symmetry and proportion—Frank Zane is one of the iconic names in the history of bodybuilding and an inspiration for many.

What he’s achieved is nothing short of phenomenal—and it’s all thanks to a magazine.

Join me to discover how Frank Zane became the Golden Era’s definition of pure perfection. 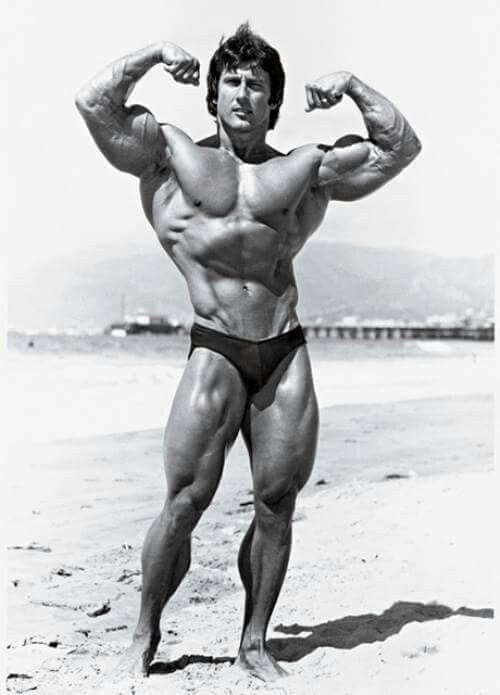 Frank Zane was born in 1942, and he lived in Kingston, Pennsylvania with his parents and younger brother.

Growing up, Frank was considered the “quiet” type—his sibling, however, was the opposite. Zane was always bailing him out of fights—he would come off worse, but it made him tougher.

Little did Frank know, these altercations would condition him for future battles of a different kind.

His interest in bodybuilding was triggered by chance—at the age of 14. While heading to his math class, he found a bodybuilding magazine in the trash. That evening, he read it from cover-to-cover—and was hooked.

Frank Zane began training at the local weight room—he also invested in a set of dumbbells for those extra sessions at home.

However, his newly found pastime wasn’t welcomed by everyone.

His father disapproved—he felt Zane was spending too much time working out when he should have been helping the family. But this didn’t deter Frank—in fact, the negativity had the reverse effect.

It fuelled his motivation, and he started to train even harder.

Through sheer dedication and determination, he went from weighing a lean 130 pounds at 14 to a solid 160 pounds—and he was still only 17 years old.

Now, you could say a 30-pound gain is nothing compared to today’s bulking standards—but given his small body frame, this was a massive accomplishment for him. What’s more, this made his parents realize how serious he was.

It was a turning point in his life—he decided never to look back.

After a few years of extreme effort, competition was the natural progression—more on the Frank Zane bodybuilding career later.

Frank Zane is a legend of the Golden Era of Bodybuilding. Yet he continues to be immensely popular in the present day. His large following on Instagram (88K) and numerous subscribers on his YouTube channel (5.7K) are a testament to that.

In terms of family, there is a Frank Zane wife—who was crowned Miss Universe in 1970. Both Christine and Frank live in San Diego, California. 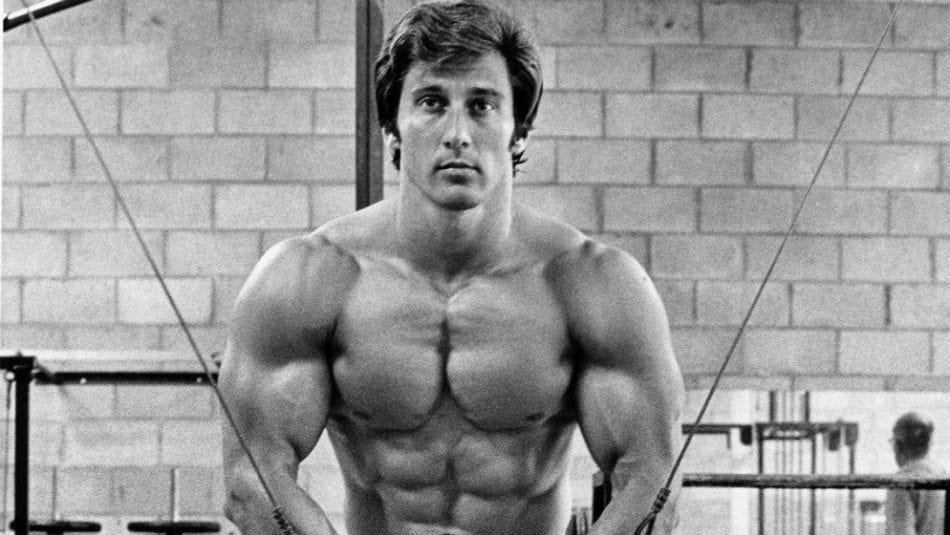 The estimated net worth of Frank Zane is an impressive $37 Million dollars.

Frank’s approach was to train smart—regularly seeking alternative techniques to improve and fine-tune his workouts.

Initially, he took on a high reps with light loads concept. This worked well for definition and a shredded appearance—but he soon realized it wasn’t gaining him the competition awards.

When he started training for Mr. Olympia, Zane opted for a split workout—divided into an intensive 3-day schedule with a rest day on the fourth. He focused on progressive overload and “the pump” to achieve an awesome aesthetic physique.

Here’s the workout plan Frank followed to train for the competition:

(Superset workout—no rest in between).

(Perform as many sets as necessary)

Take a look at the legend himself in action:

Use this day to allow your muscles time to recover. 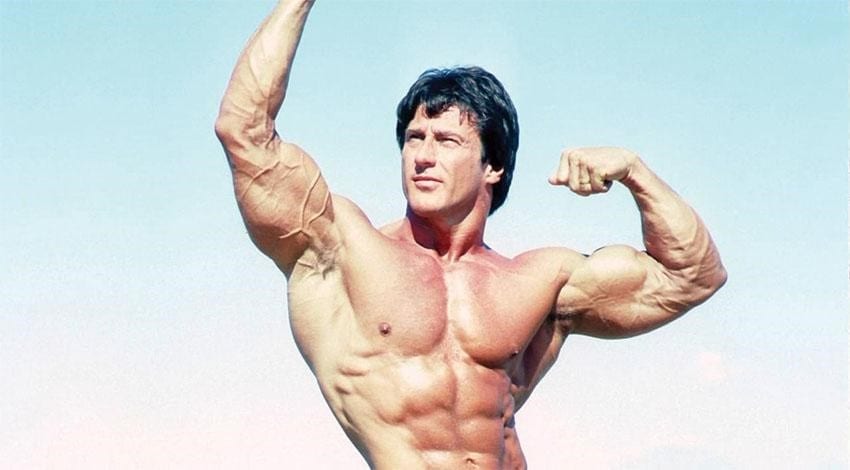 Frank Zane knew he wasn’t built for monster-like mass—but he could achieve quality. To meet his goals, Zane followed a protein-centric approach.

“I eat around 200 grams of protein per day. That averages to around 1-gram for every pound of body weight.”

Furthermore, his ethos didn’t just revolve around what he ate—timing was a crucial factor for Zane. To keep his blood sugar levels steady—he consumed a combination of protein and complex carbohydrates every few hours.

Here is an example of a Frank Zane menu plan:

Here’s Frank discussing nutrition and what he eats for breakfast: 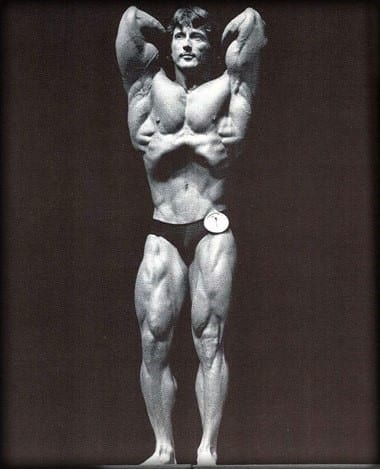 Frank’s bodybuilding reign spanned over 20 years. In that time he accomplished many things that very few can stake a claim to.

He won his first-ever title in the year 1960—Teen Mr. America. From this point onwards, he proceeded to win more than two dozen trophies. The most notable has to be the title of Mr. Olympia—in three consecutive years.

In 1980, Frank Zane’s ambition to take back the Mr. Olympia title took a turn for the worse. He suffered a severe back injury at home—which meant a lengthy recovery in hospital.

Against all the odds—Zane still managed to scoop third place in the competition.

His final attempt was in 1983. This was another tough year, he was plagued by injury again—from a bicycle accident. However, his positive attitude and determination didn’t falter—even with a damaged shoulder, he was awarded fourth place.

Although, Mr. Olympia is the ultimate recognition, here are some of his other numerous accomplishments:

What’s more, only Frank and two others have earned bragging rights over defeating The Terminator—Arnold Schwarzenegger. Zane clinched the title of Mr. Universe from him in 1968:

“I was in shape, had a good tan and was cut, so I beat him and won that show pretty easily.” 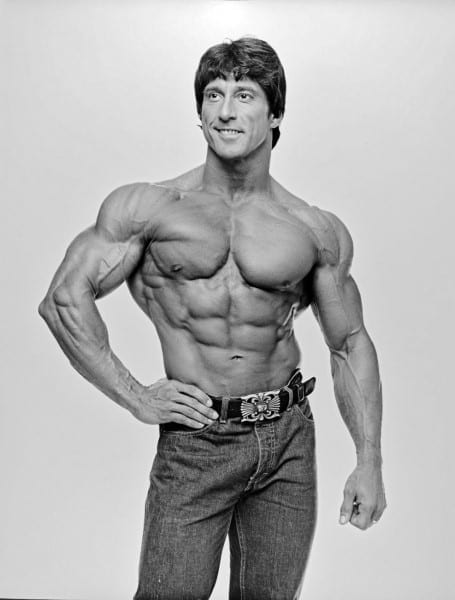 Was Frank Zane on Steroids?

The Golden Era attitude and laws on steroid abuse were far more relaxed—tighter controls were enforced in 1990.1

In one interview, Frank expressed his opinion:

“I am against young athletes using anabolic steroids when there is no call for it. They have enough hormones.”

Yet, Frank Zane never confirmed or denied whether he was using steroids. However, when you look at the generation of bodybuilders he came from—most were open about their choice of synthetics.

It’s easy enough to make your own conclusions.

Frank Zane Before and After 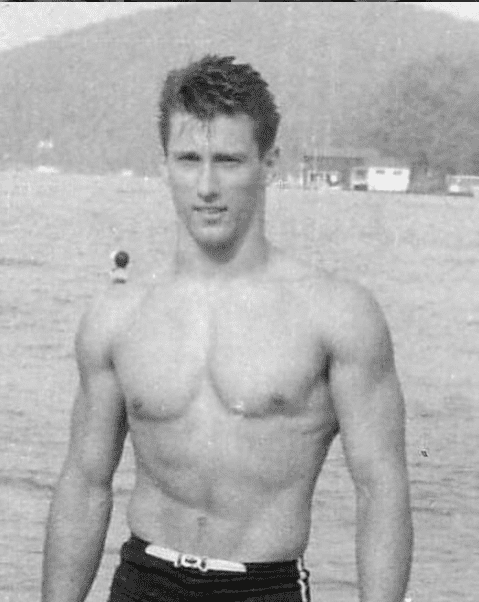 Pictured above is Frank Zane, aged 17. At this point, he was three years into training and weighed 160 pounds. 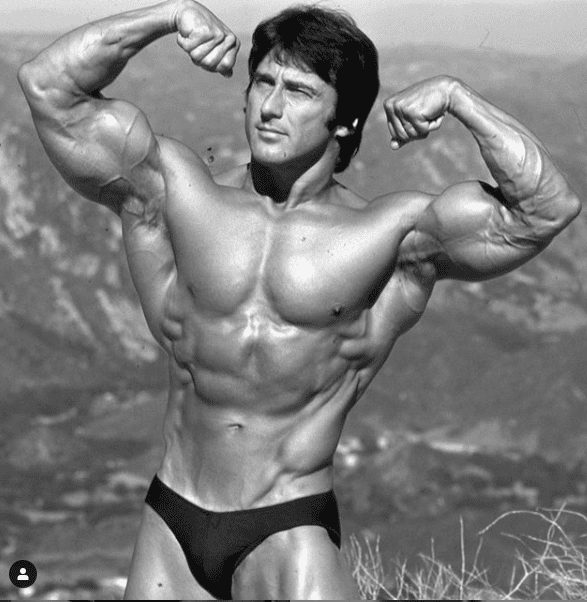 Eighteen years later—this photo was taken by Frank Zane’s wife (1977)—two weeks before the Mr. Olympia competition. It’s evident that his transformation didn’t happen overnight, but as the man himself once said, “take your time and do a good job.” 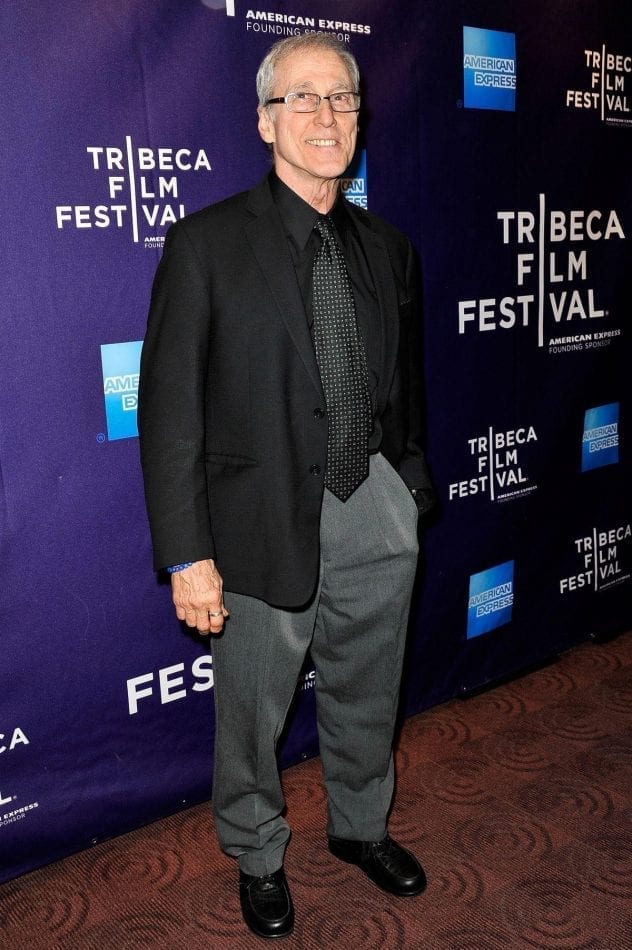 Zane retired from competition in 1983.

Frank Zane today spends his time as a personal trainer—teaching others the Zane training ethos. He’s also active on social media and frequently blogs on his official website—which doubles as an online store.

Frank Zane was nicknamed Mr. Chemist for a reason. It stems from his bachelor’s degree in chemistry—but his passion for experimenting went further than teaching in the classroom.

In the 60s and 70s dietary supplements weren’t as widely available like they are today. Most bodybuilders relied on a food-based approach to meet their intake requirements. However, Frank wasn’t afraid to try new tactics and loved to get creative.

“Back in the day, I took a lot of supplements and tons of amino acids.”

His supplement philosophy mirrored his diet—focus on protein for that prime anabolic state. Zane was a fan of Blair’s milk and egg protein powder, Brewers Yeast and liver pills.

He also backed-up his nutritional intake with a multitude of vitamins and minerals.

The published Frank Zane books are:

Frank is a true champion, and his words are a testimony to this. A legend may retire, but his thoughts continue to motivate.

Here are some of the memorable quotes from both the Frank Zane old days and the new:

“Being weak is a choice, so is being strong.”

“Live your life by the hour, not by the day. What will you achieve in the next hour?”

“Continuity is how you build a physique.”

“To be successful in bodybuilding, you have to be a good observer.”

“A lot of guys have better genes, but if you work hard and consistently, you can outperform them.”

“How Many Times Did Frank Zane Win Mr Olympia?”

Frank Zane has won the title of Mr. Olympia—three times in a row.

“What Is the Frank Zane Height?”

“Where I Can Find Frank Zane on Social Media?”

“Where is Frank Zane Now?”

Frank Zane 2019 is still actively involved in the bodybuilding world—training “future Zanes” on how to achieve their goals through hard work and dedication like him. 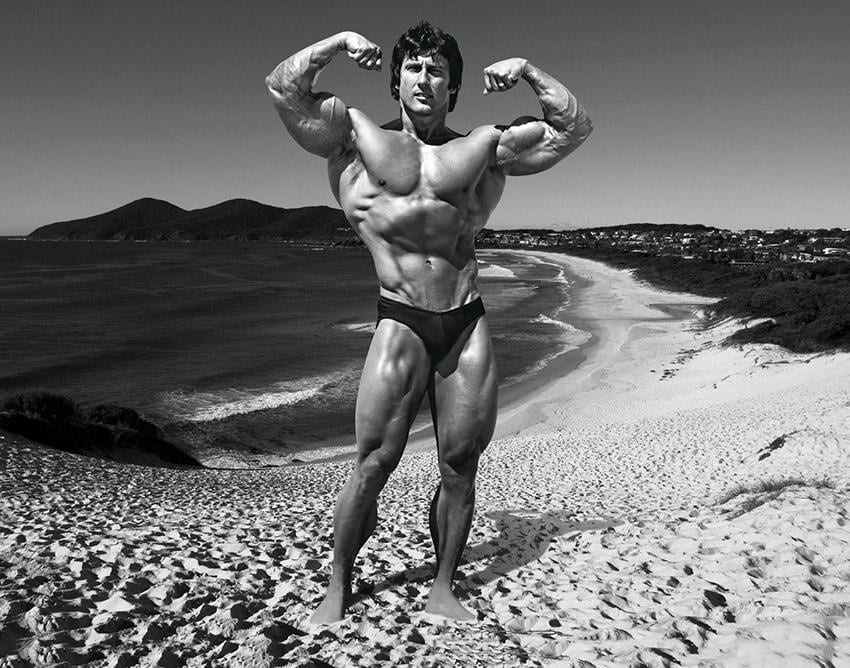 Frank Zane is an inspiration and a true legend.

He bucked the “mass” trend and showed everyone that the perfect physique doesn’t have to be all about hulk-like proportions.

What Frank accomplished took perseverance, dedication and pure determination. Yet, if there’s one thing you could learn from him, it would be this:

It’s not about short-term goals, look beyond, at the bigger picture—take your time, “and you’ve got to be focused—focus is everything.”