While professional strongmen were already on the map in the Victorian era, none of them made an impression like Eugen Sandow.

He bedazzled audiences with the amount of weight he was able to lift—and for breaking locked chains around his chest.

However, people seemed to be more amused by his sculpted physique than his feats of strength—so he started to perform poses. This was the beginning of bodybuilding stage routines as we know them today.

Come with me, as I discuss the life and shocking Eugen Sandow cause of death—and unveil the reason his wife buried him in an unmarked grave.

He was born Friedrich Wilhelm Müller to a Jewish family in Königsberg, Prussia (now Kaliningrad) in April 1867. 1

Growing up, he was a frail child. His father regularly took him to Italy in the hope that a change of scenery would benefit his health. And it did—while there, seeing muscular figures in the sculptures and paintings of the Old Masters—he resolved to become a strongman.

In 1885, he left Prussia to avoid military service and became a circus athlete. This was when he adopted his stage name, Eugen Sandow—a Germanization of his Russian mother’s maiden name, Sandov.

While traveling through Europe, Eugen Sandow visited the gym of Ludwig Durlacher (a strongman that went by the name Professor Attila). Durlacher saw Eugen’s potential and took it upon himself to be his mentor.

In 1889, Durlacher sent Eugen Sandow to London to compete in a strongman competition at the Royal Aquarium. After taking first place, he gained wider recognition for his strength—and soon his career as a bodybuilding superstar catapulted.

He married Blanche Brooks in 1896, and they had two daughters, Helen and Lorraine.

On the 14th of October 1925, Eugen Sandow passed away at the age of 58 after suffering a brain hemorrhage.

Several years prior, he had a road accident and strained himself by lifting his car out of a ditch. It’s assumed this caused Eugen to develop an aortic aneurysm that went undiagnosed—until it caused his death.

Even the most successful stars aren’t free from humiliation. Due to him being unfaithful to his wife during his marriage—upon his death, she had him interred in an unmarked grave in Putney Vale Cemetery, London.

In 2002, a Eugen Sandow enthusiast put up a black marble plaque with a gold inscription on his final place of rest, to commemorate his hero. 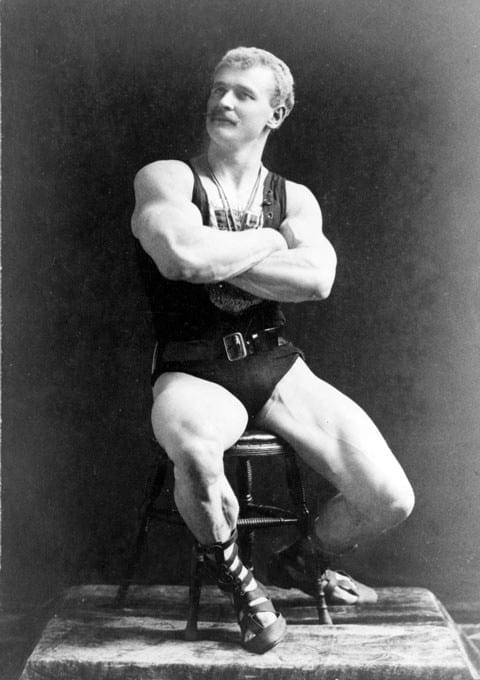 Adjusted for inflation, it’s estimated that the Eugen Sandow net worth would have been $500K-$1M in 2019.

After winning his first strongman competition, Eugen Sandow spent the next four years perfecting his technique and continuing to impress crowds with his otherworldly displays of strength and muscles.

In 1893, Florenz Ziegfeld (an American Broadway manager) put Sandow on display at the World’s Columbian Exposition in Chicago. Some years later, Eugen Sandow landed a role in a short film series by Edison Studios and made an appearance in a Kinetoscope movie.

Not only did he astound audiences at exhibitions by doing backflips with dumbbells—but they were also mesmerized by his chiseled physique.

The contemporaries of Eugen Sandow often compared him to a Greek or Roman god. He actually measured classical statues in museums to obtain the perfect formula for his proportions.

As a result of the audience’s fascination with his body, he started doing poses which he called muscle display performances. Some of these same stances are still used today in bodybuilding competitions.

After touring the United States, Eugen Sandow returned to his home in England due to stress and poor health. When he recovered, he opened the Sandow Institute—a public gym.

He started a magazine, Sandow’s Magazine of Physical Culture, along with publishing a series of books around the early 1900s. These were all dedicated to fitness, weight training and dietary habits.

In addition to being an author, he was also an inventor. Sandow designed numerous exercising devices—including spring-grip dumbbells and rubber bands for stretching. 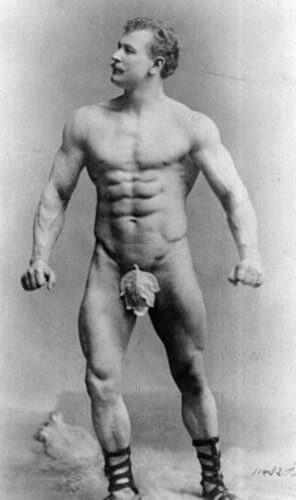 Eugen Sandow recommended 2-3 sets of 10-15 reps and only used 5-20 pound dumbbells. He believed that high repetitions and muscle control were the key to building and sculpting an impressive physique.

Advice he would give his students included nasal breathing, training outdoors whenever possible, and bending the knees for better circulation. He also advocated physical activity for women and children.

Below is an example Eugen Sandow workout plan that consists of the exercises he completed. Apart from some lunges, he mostly worked his upper-body.

The following program includes exercises that you should perform with a dumbbell or barbell:

This video shows you how to do Eugen Sandow’s signature dumbbell exercises:

Watch this trainer show you some old school training techniques:

Contrary to what you might think, the Eugen Sandow diet was pretty simple.

He didn’t deprive himself, nor over-indulge, on unhealthy foods. According to him, a balance was crucial—and, shockingly, he didn’t consume a large amount of protein.

Eugen Sandow enjoyed beer and wine, although he didn’t touch anything he considered intoxicating—basically, avoiding alcoholic spirits. He would eat regularly throughout the day and concentrate on foods that were easy to digest.

Was Eugen Sandow on Steroids?

No. Steroids were not synthesized until the 1930s, and even then they were not available for public use. However, he believed that a cold bath every morning helped him stay on track.2

It’s unclear how much Eugen weighed in his younger days. But, as you can see from the photos below, he made some impressive gains: 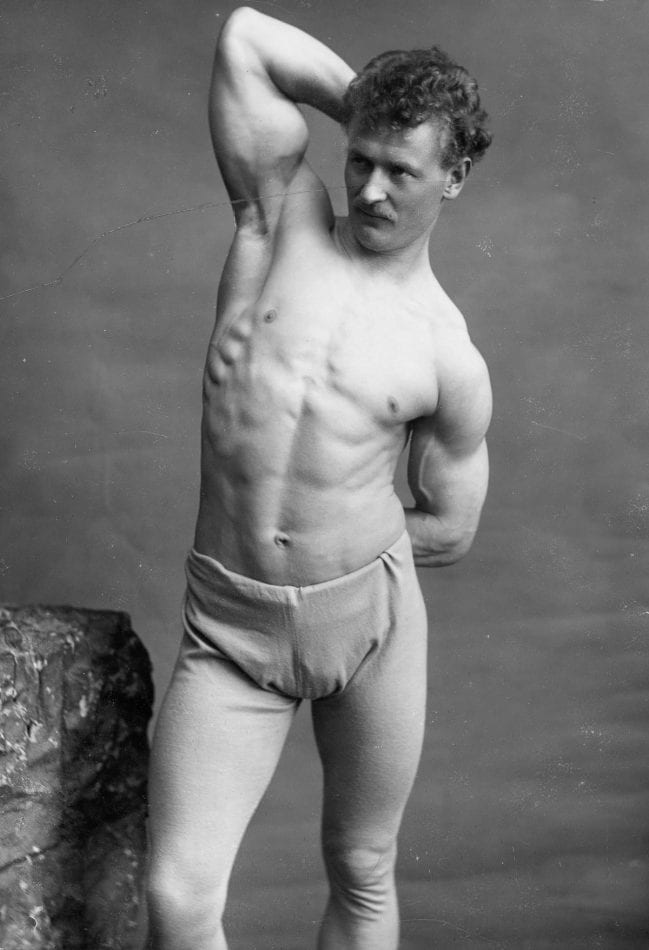 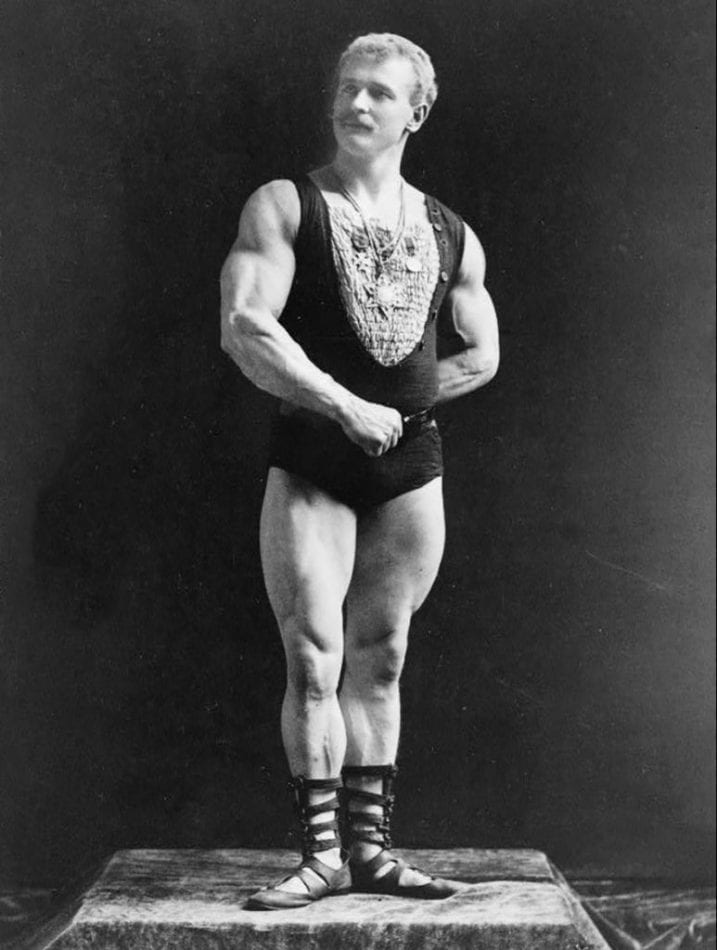 Eugen Sandow was an inspired and intellectual individual. The Eugen Sandow quotes include some of the following wise words:

“Health is a divine gift, and the care of the body is a sacred duty, to neglect is to sin.”

“Nothing, in my opinion, is better than the use of the dumbbell, for developing the whole system, particularly if it is used intelligently, and with a knowledge of the location and functions of the muscles.”

“You may go through the list of exercises with dumbbells a hundred times a day, but unless you fix your mind upon those muscles to which the work is applied, such exercise will bring but little, if any, benefit. If, upon the other hand, you concentrate your mind upon the muscles in use, then immediately development begins.”

“How Did Eugen Sandow Die?”

He developed an aortic aneurysm after lifting his car out of a ditch, which caused him to die from a brain hemorrhage several years later.

“How Strong Was Eugen Sandow?”

He could perform one-armed snatching at 180 pounds, and bench press at 270 pounds. With a Eugen Sandow height of 5 feet 9 inches, and lacking modern knowledge of training, this is impressive.

“How Did Eugen Sandow Train Legs?”

Eugen Sandow incorporated dumbbell lunges into his workouts. There is a Eugen Sandow workout pdf online explaining these exercises. 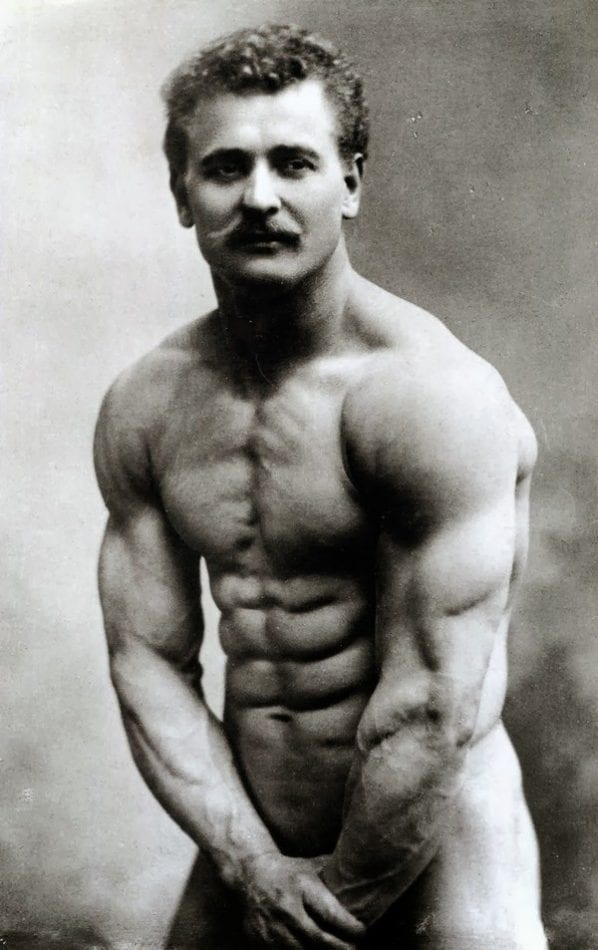 Modern bodybuilding wouldn’t be what it is today without Eugen Sandow’s influence. He truly led the way.

Even with him gone for almost a century, we can still apply his methods to our practices. No enhancers, no fancy equipment and no strict dieting—just a good work ethic and mindfulness to match.