We’ve had all kinds of feel-good stories in recent weeks. There was the big guy who was fat-shamed but ended up getting to party in L.A with loads of women. Then there were the lads from Philadelphia who invited a stranger to their stag do.

And the latest ridiculously cool story about a lad who was nervous at the gym might just top the lot. We’ll let Redditor GnashBrowns tell the story…

Don’t really know where to start, but here goes. I’ve never been strong/big or anything close to those words. I’m 19, 6’5 and 130lbs/59kg. I often go to the gym with my friend but I don’t go when he’s unavailable because I’m not confident going by myself.

Few days ago I started the Stronglifts 5×5 & GOMAD because nothing else seemed to work. It was also a few days ago when I realized I’d have to start going by myself if I wanted this to work. So today I went to the gym for the first time by myself, feeling pretty nervous. Headed to the locker room and reviewed the proper forms for squatting, deadlifts, and overhead press. First exercise was squatting. I warmed up with 55 then started 65 for the 5×5. Everything went pretty well until the last rep on the fourth set. Took a nasty spill and landed on my right knee to prevent myself from falling backwards. A couple people laughed. That hurt more than falling down. I got back on the horse and finished up the last set at 60. Next exercise was deadlift. I never really got the hang of the form for a proper deadlift so I practiced it while looking in the mirror. Started my first set at 55 but couldn’t get the form down, my right knee kept buckling and gave out on the fourth rep, causing me to fall once more. Same people laughed and got many looks in my direction because of the loud noise. Feeling completely embarrassed at this point, I put the bar and the weights in their places, and left with my head hanging low.

The poor lad was having a gym nightmare and he already had low confidence. But all was not lost just yet because none other than Arnold Schwarzenegger was on hand to give the lad a much-needed confidence boost. He said:

Someone told me about this. I hope I’m not too late here, I’m traveling, but I wanted to chime in. I always say don’t be afraid of failure, because how far can you really fall? You found out – to the ground. It’s right there. Now you know it isn’t anything that should scare you. You should be proud that you weren’t afraid – not embarrassed that you failed. You could have made excuses not to walk into the door, but you didn’t. You knew it would be hard, and it would be uncomfortable, and it might be awkward – and you did it anyway. That’s courage.
I’m proud of you. 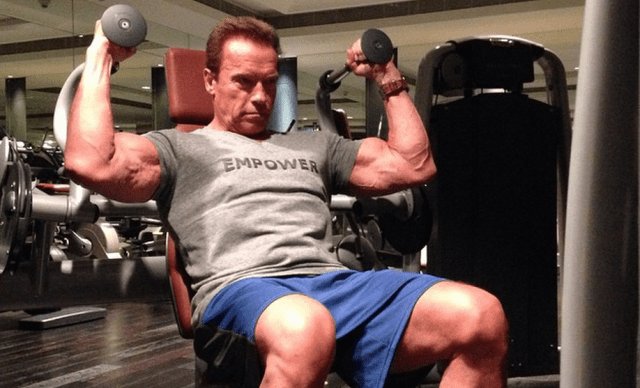 The last guy I rooted for broke a world record in the deadlift. You have more in common with him than you think. First, he started out lifting just the bar, too (when you look at him, he may have been 3 months old at that point). Second, imagine his courage. He walked up to that bar in front of a big audience and television cameras, knowing that not only had he never lifted that much before – NO ONE on earth had – and it was highly likely he would completely fail. You may not think about it this way, but you showed that courage, on a smaller level.

Finally, I’m rooting for you, too. You took the first step and you fell, but at least you fell in the right direction, so get back up and take the next step. Keep moving forward.

Arnold Schwarzenegger may be the best man on the planet.