In order to get big, you need to not only train big, but eat big as well.

You will be hard pushed to find a bigger man than Hafthor Bjornsson, the individual who plays “The Mountain” in the hit television series Game of Thrones.

As well as being an actor, Bjornsson has twice won the Europe’s Strongest Man competition and is an absolute beast. It will come as no surprise that his daily diet is huge.

He was recently interviewed by the New York Times and talked in-depth about his diet that turned him from a skinny basketballer to a hulking strongman and actor. He is 180kg of pure strength.

As you may already have known, regular strongman contenders such as Eddie Hall consume around 10,000 calories some days. This will lead you to believe that Bjornsson will consume a similar amount.

Think about trying to get all of those meals and calories into you during a single 24-hour period. You might think that in order to hit this amount of calories, they would have to be chugging down the fast food, doughnuts and any other foods that are full of calories.

You would be incorrect. The 27 year old has a very healthy diet for the most part. The quantities of clean foods he eats is simply ridiculous and they fuel his workouts, which will last anywhere between two and four hours.

This all comes to about eight meals per day. 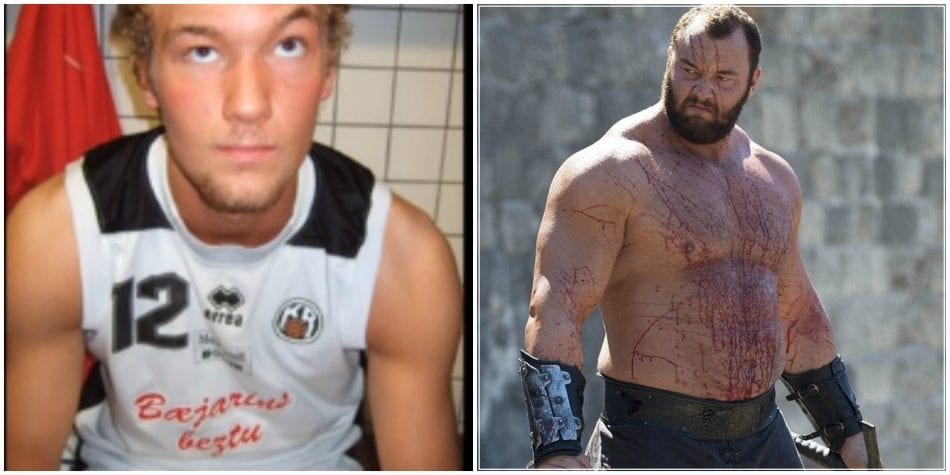 His day starts with a breakfast of eight eggs (560 calories right off the bat) along with fruit and oatmeal.

The remaining seven meals will be largely made up of grains, vegetables, meats and healthy fat sources, such as organic peanut butter and avocados.

“I eat quite healthy for a big guy like me, but you get sick of eating all the time,” he said.

“Today, I was supposed to have chicken with sweet potatoes and greens. Because I didn’t want that, I had salmon. We have very good fish in Iceland. Everything is expensive in Iceland, especially food, and especially healthy food.”

He wasn’t always The Mountain. Before he entered into the world of strongman training, he played basketball as a lean 6’7” youngster in Iceland.

It has been in the last seven years that he has managed to packed on 166lbs (75kg). A lot of this he attributed to drastically cutting down on the cardio, as well as having very heavy weights sessions (in addition to eating rooms full of food).

He is currently the reigning ‘King of Stones’ at the Europe’s Strongest man event  and is strong at all different aspects of the sport. He utilises old school powerlifting principles to continually get stronger in all areas.

This includes performing series of bench presses, squats and deadlifts with extremely heavy weight for sets in the rep range of 3-5.

It was not too long ago that he completed a 450kg deadlift – a feat that is only 12kg away from the all-time record deadlift that is held by Eddie Hall.

Here’s to The Mountain.