Everyone likes an underdog story. Laurence Shahlael is one of those.

He is a powerhouse from Swindon and beat the odds to defeat the Game of Thrones star and world class strongman Hafthor Bjornsson to win the European Strongest Man crown.

Even though he was at his heaviest and most muscular he has ever been, coming in at 160 kg, the two time champion had three stone on him.

The 32 year old Englishman still beat the 6ft 9 inches giant to become the first Englishman to do so in 27 years. 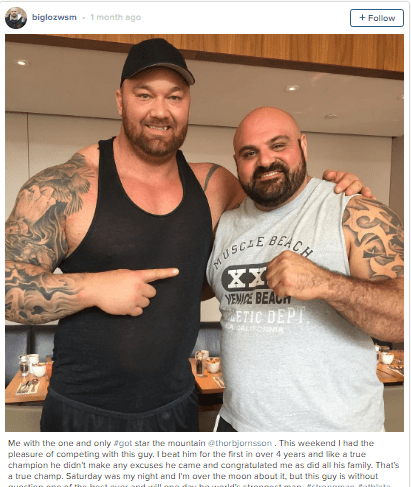 He did so after suffering many serious injuries, having torn both quads, hamstrings, biceps, triceps, labrum and his lat while attempting a deadlift world record in 2014.

He spoke with Coach Mag about his daily 5,000 calorie diet.

“Before that I never really cared much about my nutrition – I’d managed to finish fourth at World’s Strongest Man in 2011 without a proper nutrition plan, so I figured I was doing alright.

“And although you need to be big for strongman, having that extra body fat doesn’t really help much, apart from maybe in the truck pull, where you just need to be as heavy as possible.

“The key is to have functional muscle. A lot of people think strongmen are just big brutes, but you need to be seriously athletic too. I’m a lot fitter now, and I’ve noticed that I recover a lot quicker between events, especially towards the end of competitions when a lot of the other guys start to struggle. 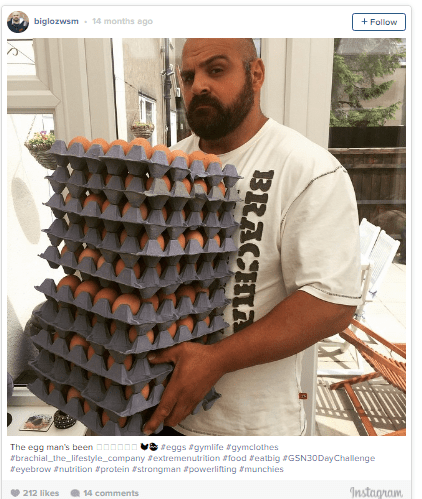 He has now upped the calories to 7,000 as he gears up for the World’s Strongest Man competition.

“This year I’ve really stepped things up a gear with both my nutrition and supplementation, he wrote on Facebook.

“Although my own knowledge is good and I’ve learnt over the years what works well for me, having the guys from Extreme Nutrition to assist with my diet in the run up to this year’s Europe’s Strongest Man has been invaluable.

“Together we have worked to attain my heaviest bodyweight ever whilst increasing my lean muscle mass and retaining the kind of conditioning I need to move fast with big weights.

“I need to be heavy as it affords me leverage against the brutal weight I’ll be moving in the events this year but I also need to be fit. I am in better shape now and carrying less body fat at 160kg than I was previously at 140kg.”

He has four brutal training sessions weekly paired with his serious nutrition program. 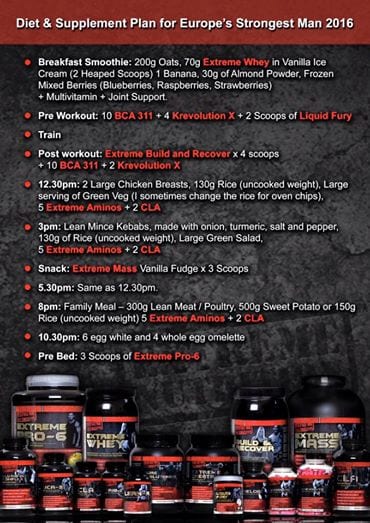 Monday to Friday sees him have a very strict diet and he eats what he wants during the weekends.

“I have put some size on this year.

“The guys are so big. The Mountain (Hafthor Bjornsson) is about 30 stone and 6ft 9ins and I’m only 6ft 2ins.

“It’s pretty much the same every day, so it’s easy to monitor what I’m eating. It’s not forever, after the competitions I relax my diet for a while.

“My fiancee Liz Mason does a lot of the cooking, but she eats less than what I eat for breakfast in a whole day!”