With his phenomenal genetics, awesome physique, and a single-minded focus on success—it’s no surprise Calum Von Moger is dubbed the second Schwarzenegger.

From lowly beginnings through to international stardom in numerous media spheres—it appears he has it at all. Yet, that doesn’t tell the full story.

His shocking opinions on steroids, together with some crazy and near-career destroying stunts—have rocked the bodybuilding world to its core.

Join me, as we delve into the insane world of Calum Von Moger. 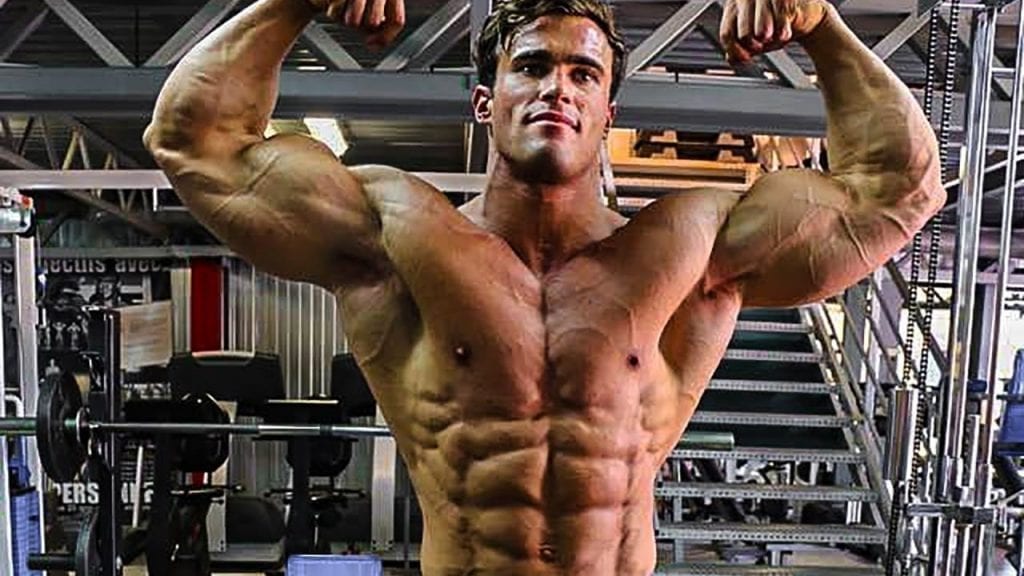 Born in Australia in 1990 and coming from Austrian and Dutch ancestry, Calum Jose Von Moger had humble beginnings.

He grew up with his five siblings on a small farm in Geelong, Victoria. Wherever he could, the young Calum helped out his hard-working parents in the family’s struggling fruit and vegetable business.

These years were to prove formative in shaping Calum’s future mindset—creating a dedication to physical work and an understanding of the importance of food and nutrition.

But, it was the movies that finally determined his future.

After witnessing the jaw-dropping physiques of the bodybuilders Steve Reeves in Hercules (1958) and Arnold Schwarzenegger in Pumping Iron (1977)—Calum resolved that this was his destiny.

But, at 14, with little money in the family—access to a professional gym was impossible.

However, his brother had a solution. 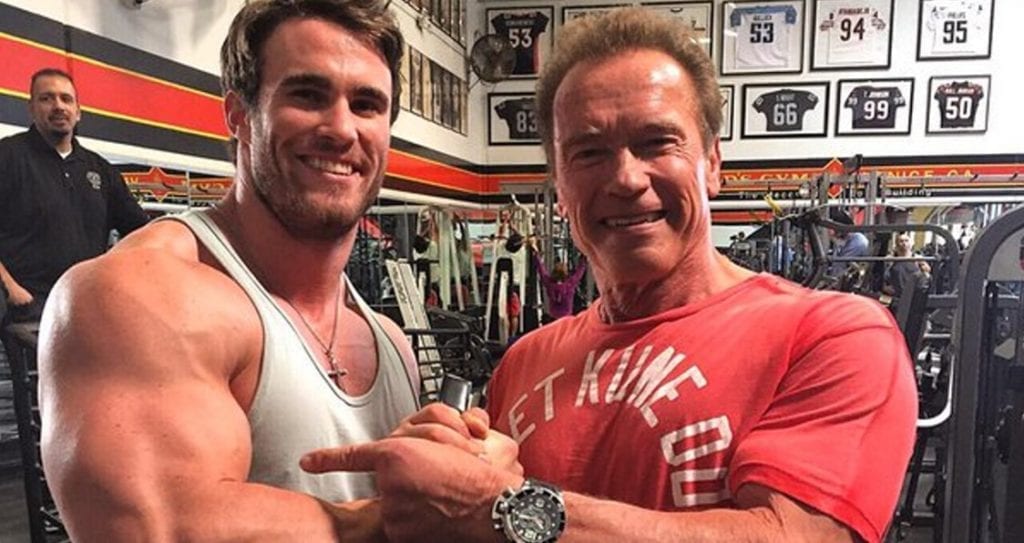 He knew that close to the family home was a downtrodden warehouse—functioning as a simple fitness center for the town’s locals. The equipment was dated and incredibly basic—mainly consisting of rusty dumbbells.

But, it was all Calum required to become addicted to lifting.

Often, the warehouse proprietor would leave the door key hanging inside in the letterbox—so he and his brother could train after school. Sometimes—the owner forgot—meaning Von Moger had to crawl beneath the shutters to allow him to train.

After a few years pushing himself hard in the gym—Calum began to enter local competitions. By the age of 21—he won the NABBA (National Amateur Bodybuilders Association) Junior International Championships.

Fast-forward to the present day—and Calum Von Moger is one of the most influential and famous athletes on the fitness circuit.

With a string of bodybuilding titles to his name, three million Instagram followers, and 825k YouTube subscribers—the man is an absolute powerhouse.

And, emulating the silver screen idols which inspired him—he entered the movie industry. He featured in the documentary Generation Iron 2 (2017) and played his hero Arnold Schwarzenegger in the film Bigger (2018).

It’s estimated that Calum Von Moger net worth is $2M. 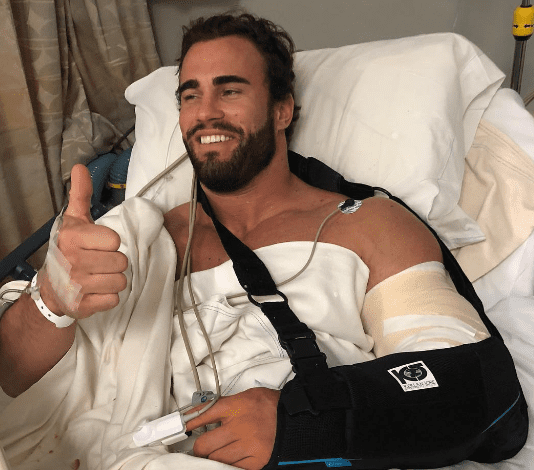 While Calum’s rise to fame and fortune appears like a fairytale—recent years have been tough.

It ended in disaster—with Calum Von Moger tearing his distal bicep tendon. An injury that required surgery to repair.

Then, just one year later, while rappelling down a cliff with his brothers, he suffered both a dislocated knee-cap and a ruptured quadriceps tendon. This led to more time under the surgeon’s knife.

Although now back in training, these setbacks dramatically reduced his gym time—and ruined any recent plans of competing.

Calum and Arnold definitely have some similarities in their physique. Calum has also said that he wants to look like the golden era bodybuilders.

What I like are the classic physiques, that’s my favourite, quality over quantity bodies made in the 60’s and 70’s. Aesthetic and with perfect symmetry and proportions. My ultimate goal would be to build a body like that one day. 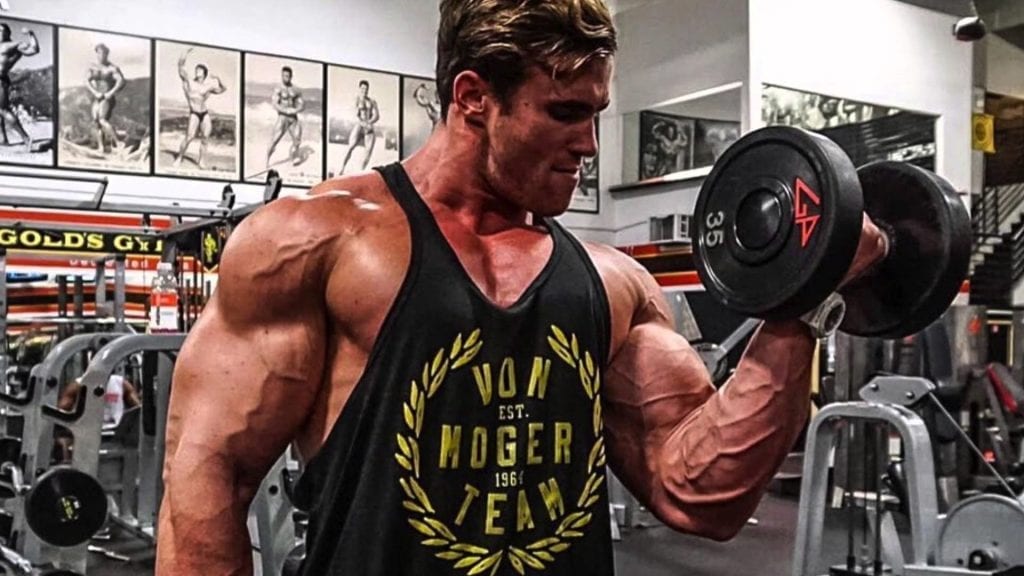 And, just like his inspiration Arnie, he follows a pyramid structure—that is, weights being raised incrementally in each new set. Furthermore, he utilizes Schwarzenegger’s favorite compound exercises—bent-over rows, squats, bench presses, and deadlifts.

Here’s how a typical weekly workout could look for Calum:

Here’s Calum powering through a full chest workout like a beast:

Keep this day clear to allow the muscles to rebuild—or to complete cardio.

Here’s Calum taking up Schwarzenegger’s theory of shocking the muscles in this insane shoulder workout:

If you want the ultimate in quads—here’s some immense advice from Calum:

Do anything you enjoy to relax the brain—lifting heavy is as tough on the mind as it is on the body. 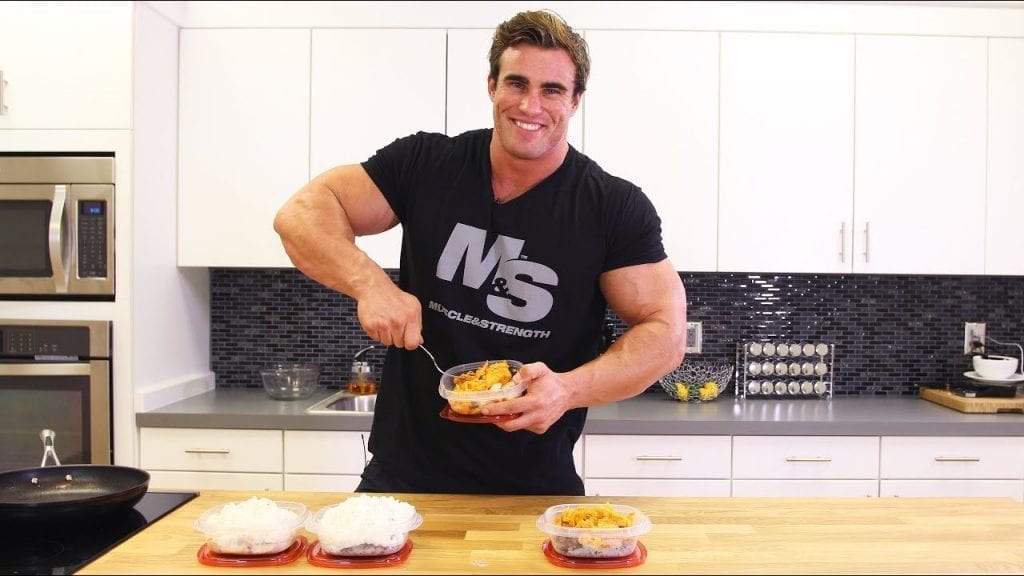 His philosophy is simple—protein and carbs.

While he tries to eat fresh and nutritious staples—he’s a self-confessed lover of junk food—allowing himself to intermittently enjoy chomping down on burgers and pizzas.

In interviews, he states that there’s nothing wrong with these cheat meals now and again—as long as it’s in moderation.

Naturally, to both gain and maintain his serious mass—he needs to eat a lot—and often.

Here’s a typical example of a day in the Calum Von Moger diet:

Watch Calum explain how he completes his grocery shopping:

Is Calum Von Moger on Steroids?

The Calum Von Moger steroids question has been a massive point of contention over the years—does he, or doesn’t he?

Well, recently, he put the rumors to rest.

In an interview with Generation Iron, he stated:

I never claim natural…I just don’t talk about it (steroids) publicly…it’s something I don’t wanna promote.

Calum says that the only way he could have any chance in competition was to make it a level playing field. All the other guys were taking synthetics—so he began to use ‘roids too—enhancing his already impressive physique.

Furthermore, he explained that he’s concerned about the kids. He doesn’t want the youngsters, who see him as an idol, thinking that steroids are both safe and acceptable.

Hence, he doesn’t talk about his stacks or cycles.

Finally, he states that no-one should even consider using steroids before they’ve had at least five years of training experience in the gym.

If you want to learn more about how the Calum Von Moger age old question of steroid use was answered—here’s the interview in full: 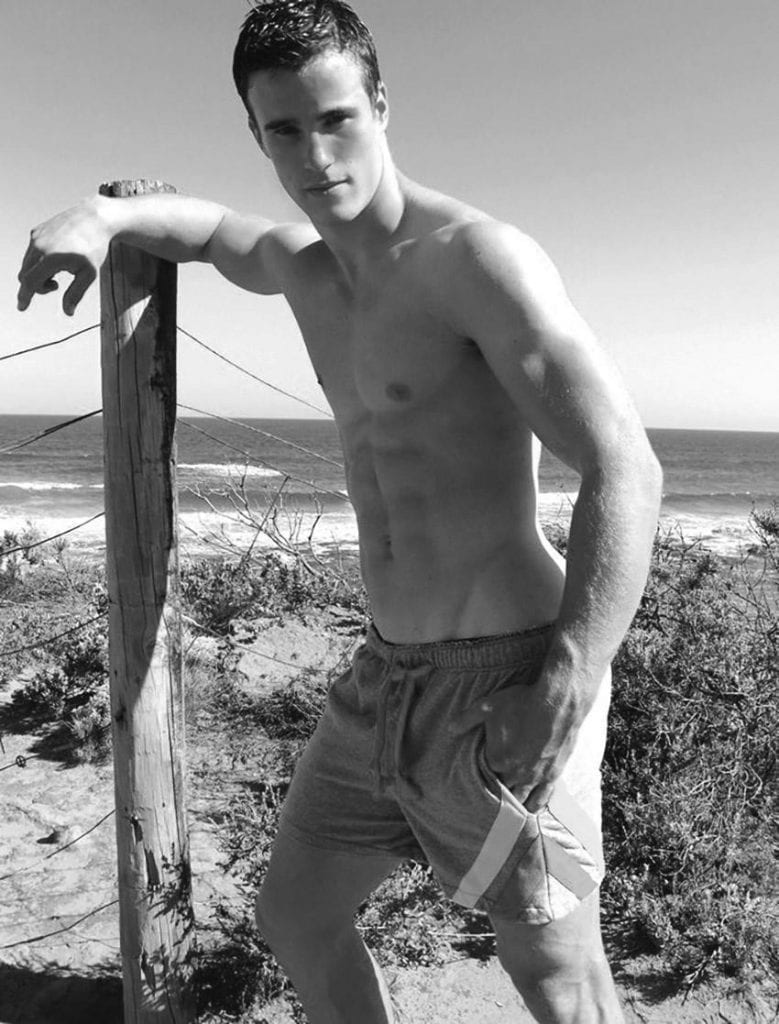 Being brought up working on the family farm, and hitting the gym at just 14, Calum Von Moger has always been fit. However, as seen below, in his younger years, he was slim and defined—but without serious mass.

However, this wasn’t to last.

His growth from skinny teen to Mr. Universe took eight years of hard work—gradually increasing training intensity and nutritional intake. And, as already discussed, culminating in the use of synthetics. 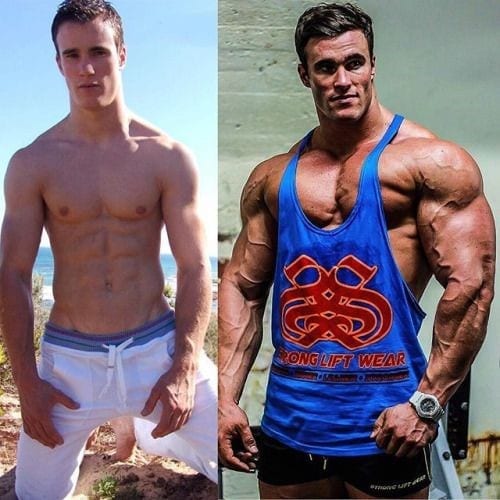 As seen in his dietary regime, Calum places heavy emphasis on protein—both from foods and additional supplementation.

Furthermore, he declares that his gym bag is never without his essential BCCAs (branched-chain amino acids) and pre-workouts.

If you follow Calum Von Moger on social media—or have heard him interviewed—you know this guy isn’t a fool.

Here are just some of his wise words:

“Just like the oak sleeps in the acorn—and the eagle waits in the egg—every great achievement starts with a dream.”

“What I like are the old, classic physiques…quality over quantity…that is, bodies made in the 1960s and 1970s. Aesthetic, with perfect symmetry and proportion. My ultimate goal would be to build a body like that one day. But then again, probably just a little bit better.”

“I’m hard with myself because failure isn’t an option.”

“Passion, motivation, and discipline—that’s what drives me toward my goals.” 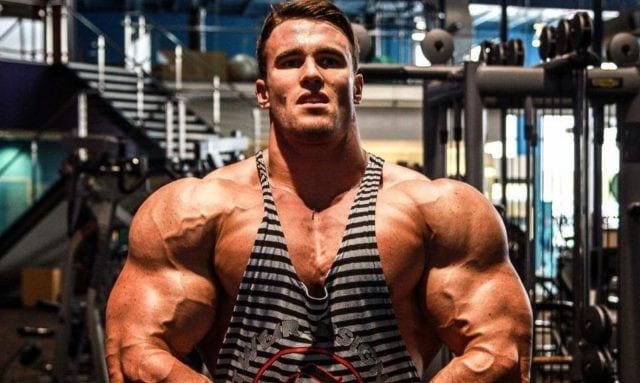 “Where Can I Find Calum Von Moger on Social Media?”

As a serious influencer, he’s highly active on social media.

“How Old Is Calum Von Moger?”

“How Tall Is Calum Von Moger?”

However, I can reveal that he is exactly six feet, two inches tall.

“What Happened to Calum Von Moger?”

Calum suffered a bicep tear in 2017, followed by a dislocated knee-cap and quadriceps tendon rupture in 2018. Thus, preventing him from competing.

However, he has remained active on social media—actively posting his recovery training regime.

“Who Is Calum Von Moger?”

Calum Von Moger is a bodybuilder,

No. Although he does live with his girlfriend, Karina Elle—an Instagram fitness model.

“How Much Does Calum Von Moger Weigh Now?”

“What Does Calum Von Moger Do for a Living?”

He works as an actor, model, influencer, and brand ambassador.

“How Much Is Calum Von Moger Worth?”

“Where Was Calum Von Moger Born?”

Calum Von Moger was born in Victoria, Australia in 1990.

“What Movie Is Calum Von Moger In?”

There are two major films.

Firstly, the Calum Von Moger movie Generation Iron 2 (2017) which follows several bodybuilders through their intense training regimes. Secondly, he starred in Bigger (2018), a comedy/drama about Joe and Ben Weider—where Calum stars as a young Arnie.

“Where Is Calum Von Moger From?”

Calum Von Moger is Australian—although he has Dutch and Austrian ancestry. 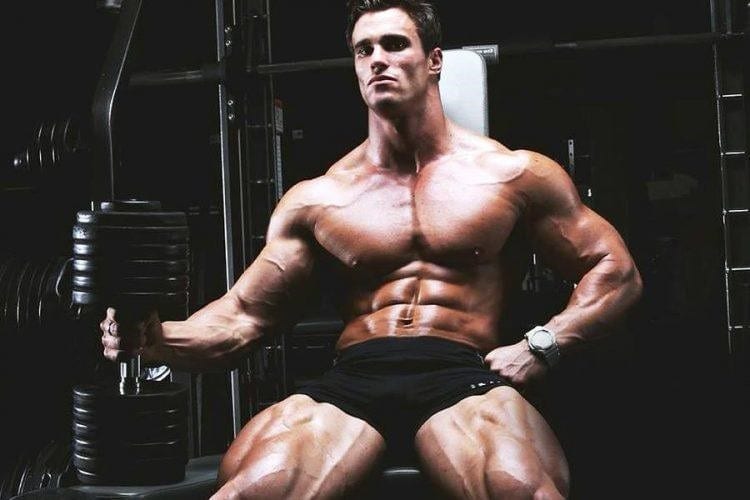 Instead of following the current competitive bodybuilding trend of behemoth-like size—he’s obtained a more sculpted and athletic physique—reminiscent of Schwarzenegger and Ferrigno.

His massive followings on Instagram, Twitter, and YouTube have allowed him to form income streams through endorsing products—inspiring the supplement and apparel brand Staunch, and promoting his own fitness and diet programs.

And—still not content—he stormed into the mainstream by appearing in two Hollywood movies.