The only thing the Internet loves more than tearing other people down is a successful underdog story: at least until that underdog becomes too successful and needs taken down a notch by the blood starved Internet trolls that is.

When it comes to bodybuilding success stories, there are many inspirational ones to choose from. Here are some of the most popular.

Do you remember Ray Ray and corn tooth Billy who dropped out of school and became dope heads? Do you remember thinking they most certainly were dead but were shocked to find out they quit the drugs and got addicted to the iron instead? Now they are yoked out of their minds and are making some serious natty gains.

Most likely you don’t know any people like this as junkies tend to stay junkies and most definitely don’t turn to the weights as a recovery option. Buttttt, it does happen from time to time and the Internet absolutely loves it.

It makes sense though. It’s hard not to be inspired by a person beating down death’s door with a needle in their hand, only to pull themselves back from the pitch black abyss that awaits on the other side of that door; managing to reignite the flame that once seemed to be permanently extinguished.

I love hearing redemption stories where someone burns all of their bridges with drugs, spirals out of control, comes face to face with oblivion, then against all odds, turns it all around and finds their greatness. Some people have addictive personalities, and one of the best things to get addicted to is the iron. I will always applaud a man at the end of his rope who decides that he would rather fight his demons instead of succumbing to them.

This is the most common success story we hear about. Even though becoming morbidly obese is generally self inflicted, we still find ourselves rooting for the fat guy who changes his life for the better after one too many medical scares. As much as it bugs me that fat people get applauded for losing weight while normal people don’t get applauded for never letting themselves get fat in the first place, I still find myself encouraging these people.

We are all human and we all have our demons. Just because a person chooses to live an unhealthy lifestyle doesn’t mean we shouldn’t cheer for them when they decide to turn it all around. Many of us are weak but we are only weak because we do not realize the power that lies within us. I think it’s great when a fat person decides enough is enough and really works on becoming healthy and overcoming years of intense twinkie abuse.

Usually this type of success story is about mothers who decide to work extra hard to get back in shape after motherhood has wrecked their minds and bodies. It’s also much harder for a mother to get back in shape after having kids versus a father. (Seeing as fathers never have to carry a watermelon for 9 months and then push it out of one of their orifices, which can completely change one’s body in the process.)

Everyone knows parenthood is hard though, which is why we still celebrate both parents when they get back to healthy living. Dad’s also usually gain weight and lose the gains they once had due to the stress of being a parent. (The dad bod.)

And being a parent is something most people can relate to so they know how hard it can be to get in and stay in shape. That’s why we love seeing the couple in their late 30’s rocking six pack abs after years of sleepless nights, eating fast food for the sake of saving time, and being pooed on by snot nosed, bald headed, tiny Danny Devito monsters.

This story has become increasingly popular over the years with a lot of injured veterans coming back from overseas. How could you not love an inspiring story of a young veteran coming back from losing limbs, almost dying, or any other horrifying situation and gaining a second life through fitness?

I can’t help but cheer anytime I see a wounded warrior who is jacked out of their mind despite lasting injuries that should have ended them. There are some truly remarkable stories out there of guys coming back from life altering injuries and becoming beast. (There are many out there who aren’t veterans who also deserve recognition.) And the Internet absolutely loves to share these stories, as it should. 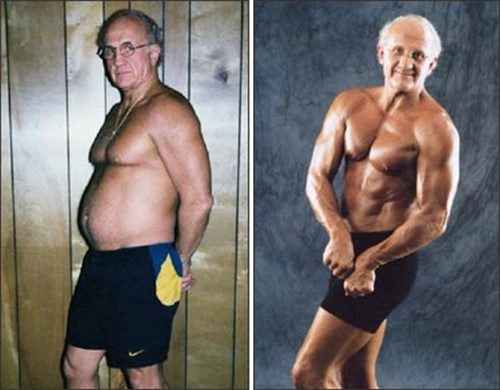 We all have heard stories of some dusty old man that should be shriveled up and playing checkers in a park somewhere but instead is in the gym being unnecessarily muscular. We love these stories because they remind us that age is just a number.

Sometimes when going through life we tend to think that our age limits us from achieving certain goals. We need to hear stories about elderly people showing that getting old doesn’t mean giving up on health and fitness. (Or living life to the fullest for that matter.) The best thing we can do as we age is to push ourselves to be better, to never give up, and to never settle for average.

One time I was in the locker room at my old gym after a shitty workout. I wasn’t feeling great and I was discouraged. I felt that I’ve reached a plateau in my training and that maybe I should just give up. Then I overheard a middle aged gentleman speaking with an old man.

The old man was overweight and complaining about everything under the sun. The middle aged guy started encouraging the old man to be better and work harder. He was giving the old guy tips on training and started saying how he has always maintained a strict diet and rarely indulged in junk food. (This guy was shredded as fuck for being what look like 50 years old or so.)

The old man kind of undermined the middle aged guys message by asking, “It’s easier for you to be in shape though. I’m 67 years old and you’re what? 50-55?”

The middle aged man looked the old man right in the eye and calmly stated, “I’m going to be 91 years old next month.” The 67 year old, as did I, stood in shocked silence.

That conversation absolutely blew me away. I’ve never thought of age the same way again. Here you had a younger man who looked and felt like shit bitching to an old ass man about training, thinking the old man had the advantage of being younger, when in reality it was completely opposite of the truth. That showed me right then and there that you can be a beast at any age as long as you put in the work.

Just for fun, I thought I’d share some types of success stories that seem to get trolled for unjust reasons. Here’s a quick list of the success stories we often hate hearing about.

1. Skinny guy who gets massive too quickly

Roids Roids Roids and duck eggs. For some reason whenever a skinny mother fucker turns beastly the Internet trolls tear the man down faster than an Arby’s roast beef sandwich going through a vegan’s intestines. Don’t believe me? Just look at comments on fitness forums talking about Zach Zeiler. Dude came back from fucking cancer and after people initially cheered him, they decided he got too big and damn near made the kid cry from steroid accusations. They act like the guy never trains and just took some Steve Rogers super-soldier serum.

The Internet loves downplaying the physical accomplishments of rich people. Whenever some Harvard educated lawyer gets yoked as fuck we just dismiss it as they can afford better training than us. We turn into Bernie Sanders and say “Fuck you, you rich assholes.”

Just like the rich people we dismiss the physical accomplishments of celebrities by saying things like “They can afford chefs, the best supplements, and personal trainers,” and “They don’t have to work regular jobs like us so all they have to do is train and they get huge.”

I’ve recently read comments from people saying these things about Zac Efron but anytime a unpopular celebrity gets big these comments emerge. Arnold was a millionaire in his

bodybuilding days but guys don’t bitch about him. Look at the Rock’s daily schedule and try to justifiably make your snide comments. The truth is these guys very often work much harder than we do. No need to make excuses. Just train harder.

“They hate us cuz they ain’t us.” Unless you are Tom brady. We hate you because you are a cheater.

Let me know in the comments.

And while you are at it, I’d love to hear about your own success story. How have you turned your life around?