Did you ever think about brainpower at the gym? Not me. Lifting has nothing to do with thinking. Or so I thought.

Then I saw this quote from Arnold Schwarzenegger, and it changed everything for me:

“The mind is the limit. As long as the mind can envision the fact that you can do something, you can do it, as long as you really believe 100 percent.”

We’ve all been there: Going for 1 more rep, right at the point of failure — and then you think of something that pisses you off, and suddenly you get a surge of super-strength and blast out 3 more reps.

Your mind can generate a ton of power.

And when you tap that brainpower, you can unleash mind-body strength & performance that shatters your normal limitations.

So if Arnold says “The mind is the limit,” then how can you make your mind limit-less?

They’re not just for nerds anymore.

Nootropic supplements and stacks are getting better and better. And as it turns out, these brain-boosters can do a LOT more than we thought.

Nootropic stacks can put the brain in such a peak-performing state, that it unlocks the mind’s full power.

In theory, this nootropic brainpower surge triggers big gains across:

We’ll be the first to admit it. We thought so, too.

Then we asked ourselves, “What would Arnold do?” And immediately started reading everything we could on nootropic compounds, stacks & supplements.

What we found out was that there’s a ton of nootropic compounds out there. And yeah, most of them are complete bullshit.

BUT, we also counted at least 20 nootropics that look promising, with a handful that are even shown to WORK in human clinical research studies.

So what’s the deal behind these compounds, and is it really possible for them to make you win more and conquer the world?

When researching nootropics we noticed a trend: The best ones work on the same handful of brain pathways, where they perform one or more of these functions:

Improving Brain Building & Repair — Nootropics help make & repair brain cells, “fertilize” for rapid neural growth and connect ‘em together. This boosts mental performance, and is also great for fighters, football players, and other athletes who get hit in the head a lot.

Fine-Tuning Brain Waves — A few nootropics are shown to change the “frequency” the brain is working at. Mostly they boost Alpha Brain Waves — that’s the frequency of creativity, higher thinking processes, relaxation and calm.

So which nootropic ingredients work the best?

It depends on what you’re trying to boost.

We’re not trying to do crosswords or win at Jeopardy. We’re not interested in age-related memory stuff. Nootropics can help with depression, anxiety and Alzheimer’s, too… but that’s not our focus, either.

We want to unlock benefits for BROS, and leverage brainpower to:

After hours of research, we have selected 10 performance-oriented nootropics that look damn good for achieving brain outcomes like these. Check it:

Citicoline – Shown to boost mental energy by 13.6% in one study. Citicoline works fast to activate brain circuits and neurotransmitters, with benefits for focus and concentration. It’s also a brain-builder, with evidence showing it helps the brain recover after a concussion. Citicoline is just a great overall mental performance-enhancer, with special advantages for workout intensity and athletes in contact sports.

Rhodiola – Adaptogens like Rhodiola have been used by Russian astronauts and Olympic powerlifters to achieve superhuman mind-body fortitude under brutally stressful conditions. Stress is a mind-killer. Rhodiola works by crushing stress, freeing up brainpower for energized, focused thinking.

Bacopa – Boosts brainpower in a lot of ways, but most known for its research-backed benefits for memorizing, storing and recalling new knowledge. It might be the ultimate learning nootropic. Personally, I want to try this to boost work performance, but also cause I am studying Game Theory to win more. Shit is hard.

L-Theanine – L-Theanine boosts Alpha brainwaves, which is supposed to make you feel focused but super-relaxed. It also minimizes caffeine jitters, which is good cause I take already get a lot of caffeine in my fat-burners and PWOs. We think L-Theanine would be good for anger management, too.

Oxiracetam – Part of the racetam class of synthetic nootropics, which sound seriously intense. Of all the racetams we read about (5 or so), we want to try Oxiracetam. It is a balls-out neurotransmitter booster known for creating  “speedy” brain chemistry. It works fast to boost processing speed and logical thinking.

Lion’s Mane – SHROOMS, BRO. Not that kind of shrooms, though. Lion’s Mane is an ancient Chinese mushroom that works by boosting Nerve Growth Factor. That’s right, bro. Shroom-based “brain fertilizer” to accelerate brain building & repair. Sounds like brain steroids, if you get my drift. We definitely want to try that.

Vinpocetine – Dirt-cheap, and super effective in miniscule doses (good for stacks & complexes). This synthetic compound spikes bloodflow to the brain for a big infusion of oxygen & nutrition that fires up brainpower. Vinpocetine works fast to boost attention span, focus & concentration.

Acetyl-L-Carnitine – Maybe you take plain L-Carnitine for fat burning. But only the Acetyl-L-Carnitine (ALCAR) form can reach the brain, where it spikes acetylcholine for faster mental processing and better focus. Also, like in muscle cells, ALCAR funnels “fuel” (fatty acids) into brain cells that’s burned for peak energy.

There’s a lot more nootropics out there, but these 10 seem to have the best brain-boosting effects for edge-driven athletes & Alpha males.

The next step was to look for quality brain-booster formulas that supply our 10 nootropics in stack form, so we don’t have to spend a ton of money buying ten different bottles. That leads us to our…

Unfortunately, there’s a lot of shitty brain booster supplements out there. After weeks of digging through these, we found 3 nootropic supplements that looked a LOT better than most, especially for performance driven Bros. They are: 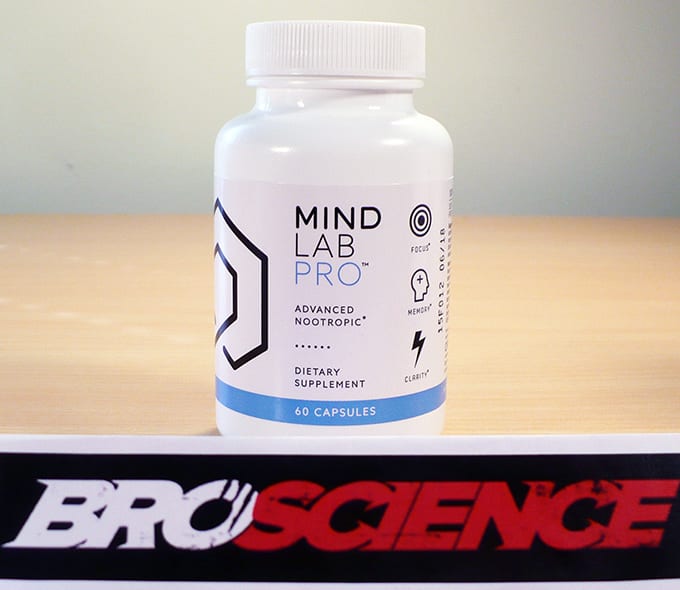 It’s pretty new compared to the next two supplements on the list, but Mind Lab Pro (MLP) is already generating a big buzz. Called a Universal Nootropic, MLP is made to boost all aspects of mental performance. It works for everybody… but has really caught fire with athletes and bodybuilders, who are using it as a “mental domination” pre-workout nootropic stack.

MLP has 11 nootropics, including 8 of the 10 Nootropics for Bros we mentioned before. What really makes MLP such a kickass stack is that they use highly potent nootropic forms & clinical-range dosages to squeeze most activity into each capsule.

Mind Lab Pro has all the best nootropics in one formula, and also use some premium forms of nutrients that are way more effective. Some highlights:

The only thing we can hold against Mind Lab Pro is that you can only buy it on their official website, so the pricing is what it is, no matter what.

Mind Lab Pro is a quality nootropic stack that’s clearly made to work. It says a lot that they list all of their 11 ingredients’ dosages right on the label. They know that the formula is potent. They want us to know too. With its unique ability to adapt and boost the type of brainpower you need, right when you need it, MLP is leading the way in nootropic stacking strategy.

Check them out at www.MindLabPro.com 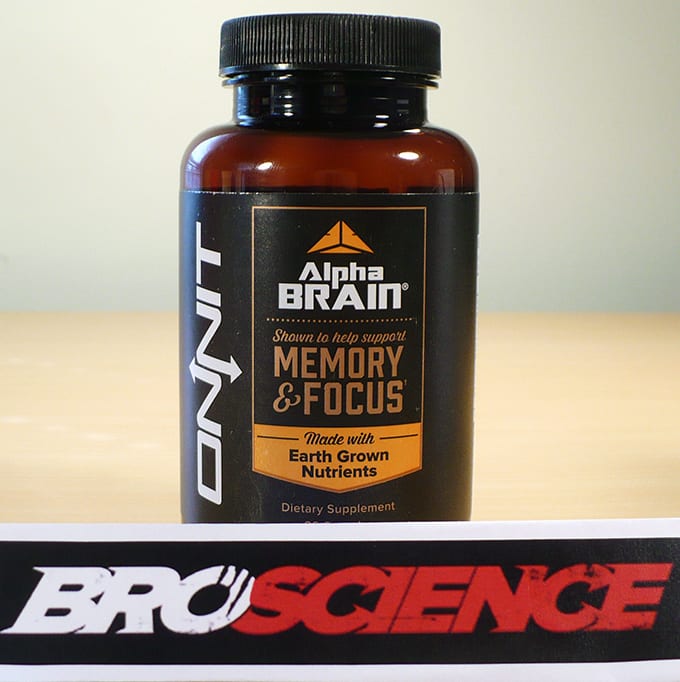 This is one has been around for a while and is one of the most popular nootropic stacks on the planet. It’s made by Onnit, a well-known fitness company fronted by Joe Rogan and endorsed by a lot of athletes, fighters and performers. Alpha BRAIN looks like a “lifestyle” nootropic, giving a mental boost whether you’re rock climbing, playing sports, or just brainstorming in the office.

Alpha BRAIN’s hook is the use of Earth-Grown Nutrients – it’s mostly made up of botanical nootropics. The formula targets Alpha brain waves and neurotransmitters in order to create what they call a “Flow State”: Heightened creativity, accelerated mental processing and verbal improvements.

The main benefits of Alpha BRAIN:

Alpha BRAIN doesn’t always use the best forms of ingredients (MLP uses better forms), but they do make great nootropic ingredient choices, including 4 from our list. Some other highlights:

The formula ingredients are great, but we just can’t know if their levels are high enough… until we try the formula to see if it works.

Alpha BRAIN has many pro athletes and fitness people on their roster, it seems that this formula is really designed for Bros’ brains. Alpha Brain may be the best formula you can get for Alpha brainwaves. It’s also the only nootropic stack that has AC-11, a South American herbal extract that may have DNA repair benefits.

It’s not nearly as well-designed or effective as Mind Lab Pro, but Alpha Brain is still a solid brain booster for bros.

You can get Alpha Brain for around $35 for 30 capsules and it is available direct from Onnit, Amazon and possibly some other retailers (we got our bottle from Amazon).

Check them out at www.Onnit.com 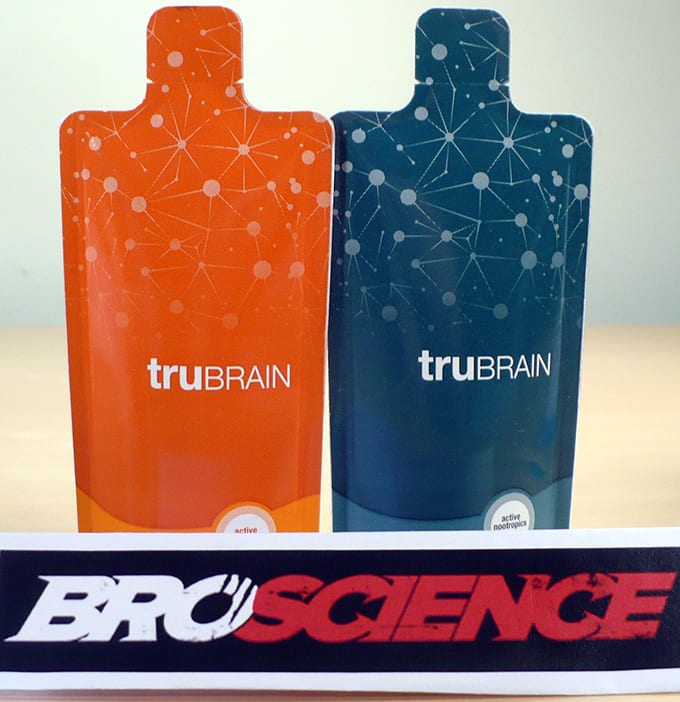 We wanted to include one nootropic stack with a racetam in it… truBrain is it. A set of 2 brain-activating formulas that you take as liquid shots, truBrain is mostly for productivity. One shot is a daily stack, the other is a once-in-awhile “Boost” formula with a more intensely stimulating brain buzz.

truBrain has a Silicon Valley vibe: It’s supposed to help you get your work done faster, so you can get more enjoyment out of LIFE. This formula could not only free up a lot more time for training, but also bring you better mind-body gym performance while you’re in the gym.

The main benefits of truBrain:

truBrain formulas both feature really solid nootropics in stacks that make a lot of sense. Both formulas have five of the nootropics from our list. Other highlights:

truBrain is driven by stimulants: Caffeine, racetams & synthetics. It’s a stimulating formula, bro. This could be a drawback if you already get a lot of stimulants in your pre-workout supplements.

Like Mind Lab Pro, truBrain is also only available to buy direct from the manufacturer.

truBrain is a powerful mental performance-booster, designed for focus and productivity in mind. It’s probably best suited for the office-worker or entrepreneur bro who needs to crush it at work so they don’t get stuck behind the desk for hours. But really, anybody can benefit from truBrain. Plus the formulas taste good so you don’t mind taking them.

truBrain would make an awesome stack with Mind Lab Pro. You’d get a capsule and a liquid shot, covering everything from MLP’s herbals to truBrain’s racetams. And, you’d get a double-dose of Citicoline and L-Theanine, two of the best nootropics out there.

truBrain costs around $55 for 20 drinks (yeah… ouch) and is available direct from the manufacturer only.

Check them out at www.truBrain.com

There you go: Nootropic supplements for bros. Any of these 3 will do you right, but we’re really psyched up about this Mind Lab Pro. It seems to have game-changing potential, and is already gaining a cult-following among athletes who are in the know.

We hope this article convinces you to give brain boosters a try, and that our recommendations help you pick a nootropic stack that works for you. And if you need any more convincing that nootropics should be part of your regimen, just remember what Arnold said: The mind IS the limit.