Warning: Long term effects of this biceps BFR training approach have yet to be determined

Let me introduce you to the best biceps pump ever! Using the BFR training method.

Let us walk you through the best bicep pump workout ever WITH a catch!

The Best Biceps Pump Ever (With a BFR Training Twist)

Loaded weapons on the streets may be a major concern for the general population, and rightfully so.

It is a cause for concern that needs to be rectified. Loaded guns in the gym, however, are only a concern for those who don’t possess them.

Big arms have long been a standard by which gym goers could compare their dominance based on how tight the sleeves on their shirts were.

Having larger than life biceps and triceps is almost a mandatory requirement in the world of bodybuilding and without them, your status is in major jeopardy.

Some have been genetically blessed in this area and need very little stimulation to initiate hypertrophy. Not to mention BFR training.

Others toil away week after a week battling tooth and nail for every single morsel of new muscle tissue they can generate.

If you are deficient in the arm size category, fear not; there may still be some hope. You can also experience the best biceps pumps ever!

The following biceps training routine is probably going to look very similar to many of the programs you have already seen, but there’ll be one major difference that you will need to add to this program to set it apart from all of the others.

But you’ll have to wait until you get to the end of the article to get it.

The following best biceps pump routine has been constructed to completely annihilate the biceps region of the upper arm and give it no other option but to respond by growing and getting stronger.

We use the BFR method to achieve these results. Described in the end.

This exercise is designed to fully engage the biceps muscles from origin to insertion allowing for the greatest blood flow possible right off the start.

Often times while doing biceps curls, trainers will allow for their front deltoids to help out in the movement, therefore, taking away the stress that should be entirely on the biceps.

This usually occurs with the slight movement of the elbow forwards and backward which is commonly seen during dumbbell curls.

By fixing your elbows in a forward position just enough so that you engage the biceps in the lengthened position, you can eliminate the front deltoids completely.

(Note: you’ll have to play around with this position until you achieve what I have described).

The next thing you are going to want to do is to keep your hands in a supinated position during the entire set.

This will keep the biceps in a stretched position allowing for more blood to enter. Finally, allow your wrists to break a little bit which will eliminate the forearms from helping in the movement and make sure you fully lengthen your arms at the bottom and squeeze hard at the top for a nice contraction.

Spider curls are very similar to preacher curls with the only difference being the angle at which you brace your arms against the bench.

This position is necessary for this exercise as it eliminates the natural desire to lean back as you curl the weight up because you are pretty much leaned over the bench and in a fixed position.

If you alter this position, then you are no longer doing a spider curl. Next, I chose the low cable station to do these because of the constant tension the cable will offer you in this exercise.

Generally speaking, when you do spider curls with a free weight there is a bit of a rest area in the repetition itself.

This rest is due to gravity; gravity pulls straight down and if you think about it, when the free weight is at the top of this type of movement, the biceps really doesn’t have to do any work because the bench is helping you keep it up and in place.

This is where the low cable comes into play. The weight you are moving is in front of you (the weight stack) and the cable is constantly pulling at your biceps from an angle, therefore, creating more time under constant tension than when compared to the free weight version of this exercise.

Now that you have worked on building the muscles responsible for the height of your biceps, it’s time to work on the muscles that will thicken up your biceps.

Hammer curls are an excellent exercise for doing this. Whether you do your hammer curls straight out in front of your body or if you do them using the cross-body motion, hammer curls will thicken up your upper arm and add to the size of your forearms as well.

I would challenge you here to again keep your elbows in a fixed forward position, much the same as your double arm biceps curls, to keep the stress on the brachial muscles for the duration of the set.

When you can’t possibly complete another full repetition, bang out a few partials to really finish it off and push as much blood in there as possible.

Ok, so like I said, the above-described biceps routine probably looks very similar to all of the other programs you have seen before.

Well, here is where it differs. I challenge you to try what is known as “Occlusion” or BFR training. BFR stands for “blood flow restriction” and that is exactly what you are doing by utilizing this method of training.

What you do is find a pair of wrist bands, tubing, or even your wrist or knee wraps.

Then you take whatever you have and tie it around your upper arm, right in the biceps/deltoid tie in, nice and tight and effectively cut off your circulation.

Wait for a second, is this safe?

Should you be cutting off blood flow while trying to push as much blood into the biceps as possible?

Does this even make any sense?

Will, you hurt yourself doing this?

Well, here’s what we know for now. This type of training, in a research-based environment, has been shown to increase the activation of biceps muscle cells and increase the potential for hypertrophy.

Anecdotally speaking, people have been experiencing some good gains by utilizing this approach (this writer included).

Here’s the thing though, long term studies have yet to be released and no one knows for sure if there are any long term negative effects of doing this. One thing is for sure, the pump you achieve is incredible; so much so that it is almost painful.

If you’re lean enough, you’ll notice that the vascularity in your arms is crazy when you do this and gives you that freakish look that everyone wants. Finally, and perhaps more interestingly, you can’t and don’t need to use the same amount of weight that you would usually use for your biceps training.

This bodes well for those who have bad elbows or wrists as you can achieve the same results by doing BFR training with almost half the weight. 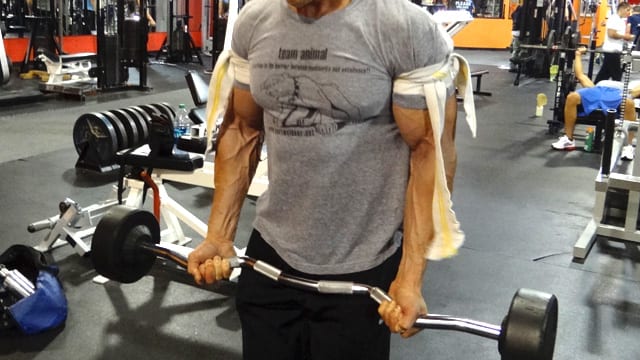 Our focus on a muscle that is always in the spotlight for physique development will continue to be a driving force in your training.

When someone asks you to make a muscle, they’re expecting you to throw up the guns and bust out a double biceps shot.

They could care less about your quads or big lat spread. If you find your biceps development needs a little help, Occlusion/BFR training could be that secret ingredient to initiate new growth.

I personally wouldn’t do use this method each and every time you want to train biceps simply because we just don’t know exactly what it could do to us long term, I think trying it every once in a while for an extreme pump and shock workout, might just be the way to go for now.

Give it a try, the pump you get will be unbelievable and the growth you could experience may be something you haven’t’ seen in a long time with your training.

4 thoughts on “The Best Biceps Pump Ever Using BFR Training”