For most starting out on their journey to a better body, the advice of ‘bulking up’ and ‘cutting down’ is never too far away. Most guys are advised to do this (we say ‘most guys’ because girls don’t really look to ‘bulk’). And so, with this advice, many bodybuilders will look absolutely diced and shredded during summer, however, as winter approaches, their calories begin to creep up (significantly) and their choice in healthier options for food begins to decline (also significantly).

Due to the whole ‘cutting/bulking’ cycle, most athletes who practice this will often starve themselves for months in a bid to ‘cut down’, only to find that when they begin their ‘bulk’ again, they’re absolutely pigging out on high calorie foods with little nutritional offering (aside from sugar and saturated fats). This ends up resulting in some people taking their bulk too far and ending up looking like ‘dream bulkers’. Dream bulkers are people who have lost their once-shredded physiques to the deadly lifestyle of ‘bulking’, and may never ever get back to the physique they once had. Some say that many souls have been taken by the God of Dream Bulk, and remain in an eternal hell of obesity. 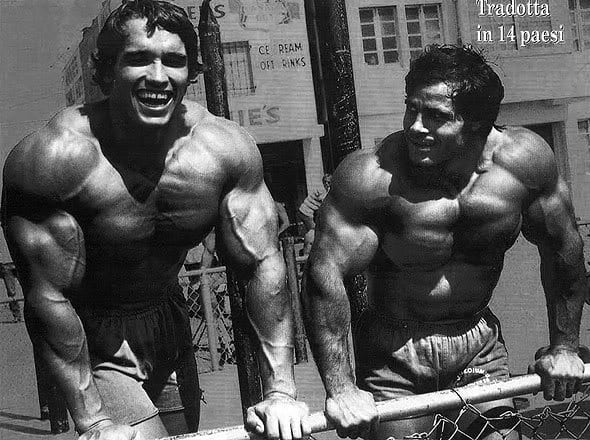 Arnold Schwarzenegger however, isn’t a fan of this cyclic eating practice. And he goes into a little bit of detail about it below:

“One hint I can give is not to ‘bulk up,’ or let yourself put on a lot of extra fat weight during your training that will only have to be dieted off for the contest. Bodybuilders are apt to do this because being heavier makes them feel bigger, but this is an illusion— that extra weight is not working muscle and it does them no good whatsoever.”

He goes on to add:

“Both Franco and I used to prepare for a contest actually under our competition weights, and thus had to gain five pounds or so in the final week. This meant we didn’t have to restrict our diets too much, and we ended up feeling better and stronger, and looking a lot better. Bulking up, I believe, is a mistake, and now that there is a Grand Prix circuit of professional contests, which the pros have to be ready for week after week, the practice of becoming overweight and then dieting severely is getting to be a thing of the past.”

After reading all of the above, it definitely isn’t to say that ‘bulking/cutting’ DOESN’T absolutely work at all – it does. But it only works if it’s done right, which is something that isn’t seen very often. As Arnie said, if you aren’t making LEAN gains, you aren’t doing it right.

Will you let the God of Dream Bulks take your soul?