If you read fitness magazines or online fitness sites, you may notice that a lot of them cater to people with cushy desk jobs. They often discuss how sitting around at work can hurt your gains and try to give you advice on working around those issues. Now I’m not hating on people who have an office job, I couldn’t stand to work in an office. I’d end up like Milton at the end Office Space except I’d end up in jail. I just want to know, what about us blue-collar guys?

I never hear much about the disadvantages of doing manual labor work. I’ve never read an article discussing the downside of blue-collar work and how to keep the job from affecting your progress in the gym. It’s like these magazines and sites forget that some of us are just plain ol’ working stiffs. Believe it or not but blue-collar workers read too.

I’m talking about your construction workers, oil well and pipeline workers, firefighters, bricklayers, carpenters, roofers, bearded lumberjacks, professional bear wrestlers, coal miners, the guy who has to make Shaq’s clothes, Australian people, the list goes on and on. These guys bust their ass and yes, there are some benefits to these jobs. Many of them get you outside. Often times the pay is decent and you get to move around a lot, building strength and endurance. The problem though lies within the repetition. You do something enough and it will start to yield negative results.

I’ve worked in the beer business for the last 5 years. To be more specific the beverage business as I split my time between delivering beer and heavy ass jugs of water. I spend eight hours a day lifting heavy shit and walking miles upon miles. I carry 5 gallon water jugs up and down flights of stairs, pick up kegs, stack hundreds of cases of beer, and top it all off by jumping in and out of a big delivery truck all day. It gets old real quick. I love the positives of the job but it starts to wear my body down faster than Jared the Subway guys bunghole during his first night in prison.

Here are some ways working a blue-collar job can hurt your gains. 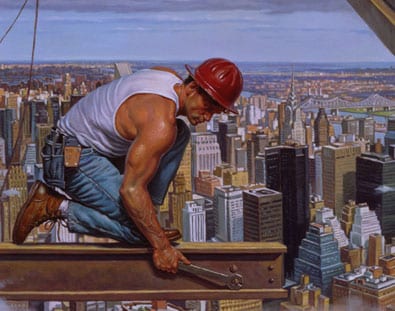 Too tired to train.

After lifting heavy shit all day the last thing you want to do is go lift more heavy shit for recreation. Yes, you can go to the gym before work. If you don’t mind being completely wiped out before your work shift even starts that is. I workout in the evening after relaxing at home for a few hours. It’s not that I particularly like training so late. It’s just that usually when I get home from work I’m absolutely exhausted. Once my ass hits that couch, I’m knocked out like I just finished having drinks with Bill Cosby at one of his hotel pudding pop parties.

Fun fact: if you workout in the evening and have to wake up no later than 7am, pre-workouts are not a good option before the gym. I took original formula Jack3d (it was an old tub I stashed away when they banned it.) once before a late training session and couldn’t fall asleep forever when I went to bed. When I did finally fall asleep I dreamt I was a moldy carrot being peeled over an active volcano that looked a lot like Melissa McCarthy’s buttcrack. If I have to explain to you what is wrong with that you need more help than I can give.

No time to eat healthy.

There’s nothing like busting your ass in the gym and eating right, only to indulge in a Big Mac attack on your lunch break because you are behind and need something quick to eat. Being very busy and in a rush usually leads to poor lunch choices. I have fallen for the quick slice of pizza more times than I like to admit.

Being on the road every day makes it really easy to take the easy way out and eat fast food. Not only is this a waste of money, but it is also a surefire way to wreck your diet. I bring my lunch everyday now but it’s not like I have a microwave to heat up my food. I’ve used the truck heater but all that does is make the food dog turd warm on the outside and cold as Donald Trumps view on Mexicans inside. I really do pretty well to make sure I eat right but it’s not always the most pleasant of lunches. You just have to do what you can to make positive decisions.

If you work in an office though chances are pretty good you have a break room with all the appliances needed for a healthy lunch. Same goes for factory work. Almost all factories and warehouse work has the advantage of a break room. So you can eat pretty decent if you want. Construction work on the other hand is a bit different. Most likely you will find yourself eating greasy ground up rat sausage from a filthy food truck run by a hairy Armenian, who no matter the weather is always very sweaty.

I deliver to every kind of business you can imagine. From major billion dollar corporations, worldwide shipping factories, and any kind of white collar profession you can think of, (the water side of the business.) all the way down to the dirtiest dive bars in this part of the state. The one thing all these places have in common are that a large portion of the employees are fat as fuck. That is not a coincidence. Poor lunch choices can easily lead to poor lifestyle choices. I can’t stress this enough, Make. Positive. Choices! Unless you enjoy the idea of waking up at 50 years old with the body of Ralphie May and the libido of Stephen Hawking.

Now that I’ve mentioned guys in wheelchairs, let’s talk about another shitty side effect of manual labor work.

The number of stupid injuries you accumulate over long periods of doing blue-collar work is unbelievable. I’m not talking stupid as in getting the hose of an air compressor stuck in your dick hole, thus turning your cocktail frank into a meat balloon. I mean more along the lines of tweaking your back while lifting up a hunk of wood and having it bother you for the next six months.

Just in case it wasn’t clear, these topics describe normal humans doing these jobs. Most labor jobs have that one freak of nature, pure barbarian, dumb as a sack of hammers, overly manly guy who shrugs off injuries like they are nothing. This is the kind of guy who could not only step on a Lego, but stand on it for a solid 30 seconds before succumbing to the immense pain. They usually have a name like big Ramrod Abernathy and have fucked no less than three wild gazelles in their lives. Guys like that are retard strong and the head of their dick tucks right into the top of one of their socks. Those kind of guys are excluded from these issues.

I’ve had numerous nagging injuries over the years that have hindered my ability to train properly. I’ve hurt both my wrist, jacked up my back many times, hurt my elbows, fucked up my knees, and my feet bother me from time to time. I’ve always managed to get around these problems but it really is a kick in the nuts not to be able to go as hard in the gym as you want. The best advice I can give if you find yourself in a similar situation is to lighten your training, take active rest days, stretch as often as possible, and try to find a way to go easier at work for awhile. You may have to depend on your coworkers help from from time to time but that’s why they are there, supposedly anyway. Some guys are real cunt holes.

While we’re on the subject of being around some real clam jammers, there’s another problem with your job.

Being surrounded by the wrong people.

One thing that can really wreck your progress in and out of the gym is by surrounding yourself with the wrong people. It is easy to become friends with the guys from work but let’s be honest, most blue-collar guys aren’t very body conscious. I’m sure you can name five guys from work off the top of your head who smoke a pack of cigarettes during a shift and have the physique of Jack Black after a three hour taco bender. These are the guys who know every show on TV and have no problem discussing their lava shits that they take after lunch.

I’m pretty lucky in that I generally only have to work 40 hours a week Monday through Friday. That gives me enough time to recover and hit the gym. A lot of guys though work up to 17 hours a day, sometimes seven days a week. Bless you rugged men, you truly are the manliest of men, but I say fuck that noise. You can’t pay me enough to spend my life grinding away until I look like the crypt keeper from Tales From the Crypt.

I don’t really have to go into how working long hours can affect your gains negatively. Long hours are the groundwork for everything on this list. Long hours lead to eating junk food, spending way too much time with the wrong people, causes more injuries to pile up, and leaves you too tired at the end of the day to train.

Sure, you can say just be more disciplined. Do whatever it takes! You just need to have grit and determination. Other generic motivational words!

How about this though. For anyone with that mindset (who isn’t out of their mind hopped up on steroids, cocaine, and albino alligator blood) try cutting trees down all day. Try carrying drywall up ten flights of stairs for eight hours. Try wheeling 175 lb beer kegs two at a time up

and down the side of a muddy mountain. Maybe then you can see why us blue collar guys don’t understand why desk jockeys aren’t yoked as fuck. If I worked in an office, the whole shift would be my rest period between training sessions.

But what do I know? If I went to college I might have a nice office job instead of being a 200 lb blonde bearded orangutan with sore joints and unnecessarily strong shoulders. You just gotta make the best of your situation and try to stay as consistent as you can with your diet and training. You can only control what you can control. And for the love of god stay away from big Ramrod Abernathy.

What kind of ridiculously hard jobs have you done? How did you avoid hurting your gains? Let me know in the comments and perhaps we can swap war stories.