Recently the east coast was hit by a big snow storm. I bring this up because I own a Siberian husky. As soon as I took him out in all of that snow, he went more stupid than B.O.B. talking about the shape of the Earth. He ended up running up a giant snow mound and jumped in a frozen bush.

I had to lean over the mound and pick his flopping 60lb body up out of the bush with one hand. I didn’t think anything of it but as I started walking I realized I pulled a muscle in the middle of my back.

Again, not thinking much about it, I went to the gym the next day for leg day. Took me a week after that before I could go back to the gym, and even then I wasn’t able to go that hard.

The point in telling you that is to give you an idea how easily, and stupidly I might add, it is to get injured. I do heavy lifting inside and out of the gym every single day. I never even think about getting hurt unless I’m doing something potentially dangerous.

So that got me thinking about some of the worst injuries I’ve seen. Rather than discussing the most awful and bizarre injuries, I want to talk about common ones that will fuck you up for a long time.

So by main exercises, this is a list of the most common major injuries associated with said exercise. 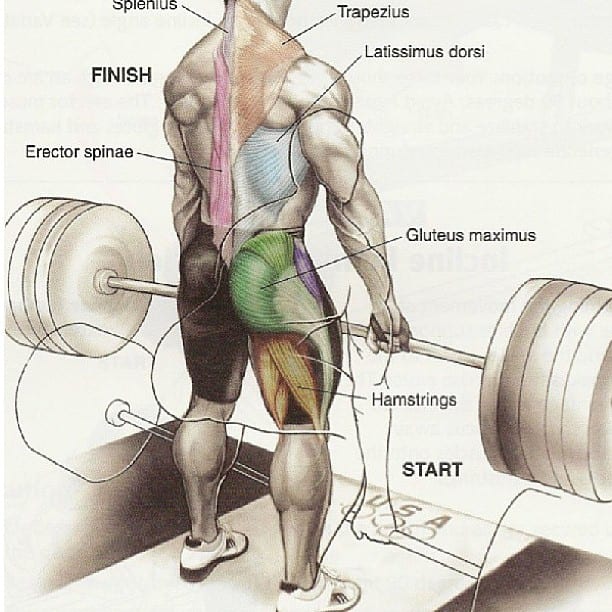 Might as well as get the snap city mayor of exercises out of the way first. Deadlifts are a great exercise when it comes to building overall muscle and strength. Unfortunately, they are also one of the most injury causing exercises you can do. The main reasons: bad form, too much weight, and not enough warm up.

I’ve hurt my own back significantly when I was younger from doing deadlifts. My form was good and my strength was there; what got me was not warming up properly.

At the time my warmup weight was 315lbs. I could lift it easy for many reps, but one day I just jumped into it too quickly and became a citizen of snap city.

Most gruesome injuries commonly associated with this exercise: lower back injuries, bicep tears and passing out.

The lower back injuries are obvious. The bicep tears are what people generally don’t think about when doing deadlifts. It occurs when you are lifting with an alternate grip. (One underhand and one overhand.)

Very often the underhand grip is the arm where the tear occurs. When lifting very heavy weight, it is easy to slightly curl that underhand arm and pop! The bicep, or much grosser, the bicep tendon rips right off of the bone.

There are plenty of videos out there where this happens. It’s enough to make your coin purse shrink right up inside of you.

Passing out is another thing most guys don’t think of when it comes to this exercise. But if you have lifted very heavy and held your breath during the lift, you understand the feeling.

Hell, even if you don’t hold your breath there is a good chance you have gotten light headed from doing heavy deadlifts. It’s a lot more common than you think for people to pass out and split their wig open.

Well if this isn’t first it most certainly has to be second. The injuries associated with this are pretty much caused by the exact same problems that plagues the deadlift: bad form, too much weight, not enough warmup, and that damn ego.

Most gruesome injuries commonly associated with this exercise: back problems, knee injuries, hernias, and hemorrhoids.

The back is again obvious. If you are going to throw heavy ass weight up on your shoulders there is clearly going to be risk to hurting your back. Herniated disc, lumbar problems, all kinds of things can go wrong with your back.

It’s just the risk you take with doing back squats. (I’ve recently started doing front squats as it’s a lot easier on my lower back.)

Knee injuries are very common too. You can look up squat fails all day and most of them are either ego lifting gone wrong, or powerlifters having their knees blow out on them. It’s loud, it’s gross, and it’s hard to watch.

When you squat extremely heavy, the knees are usually the first thing to give.

Hemorrhoids aren’t usually considered major injuries, but they can burst and other gross shit that I’m sure would completely incapacitate you; generally they aren’t something to panic about though.

That being said, squatting heavy is one of the easiest ways to blow out the old pooper. By the way, there is a squat video out there where that actually happens. (Dudes intestines blow out of his ass.) It’s not as easy to find as the other injury videos.

And you probably shouldn’t look for it anyway because it’s revolting.

Hernias are very common with people who are generally out of shape noobs who try to squat heavier than they can. It can happen to seasoned lifters too though so be careful.

There are a few risk when you bench heavy. Most common forms of injury happen because the weight gets dropped on the person doing the press. While dropping the weight on your face, neck, or chest is a sure fire way to end up in the ER, it’s not the reason I put this exercise on the list.

Most gruesome injuries commonly associated with this exercise: shoulder injuries and pec tears.

The shoulder injuries are pretty common. Rotator cuff tears and other forms of strain can occur at any time. Often it happens just from normal wear and tear and lifting heavy one too many times. I know a lot of guys who have ended up blowing out a shoulder from benching too much.

Usually the shoulder injuries are something you can recover from within a reasonable amount of time.

The pec tear on the other hand is much more serious. Guys like Sylvester Stallone and Scott Steiner have torn their pecs (clean off of the bone I believe.) and the after effects can be very

detrimental; your chest and upper arm usually turns black for instance. Not to mention your benching days could very well be over depending how severe the tear was. Usually having a spotter does not help to prevent this either.

It just happens during the lift and watching it happen to someone can be very disturbing.

Just watching someone performing a heavy snatch is enough to understand how risky it can be. I personally don’t feel the risk is worth the reward for doing this exercise. Obviously if you are into Olympic type training then that’s different, but I don’t feel the average bodybuilder is going to benefit too much from doing this.

Most gruesome injuries commonly associated with this exercise: shoulder injuries and head trauma.

The shoulder injuries are a given when you are throwing heavy weight up over your head. The skull fractures on the other hand should be obvious, but most people just don’t think about dropping the weight on themselves.

Always be careful when doing any kind of exercise that requires weight being placed above your cranium. If you want to see how this exercise can go wrong, just watch any crossfit fail video.

You are more likely to be hurt when you are going through the motions of something you have done countless times before.

You need to always be careful and always be alert.