We’ve all been there, our body fat percentage is getting a little bit out of control, yet we make up excuses so we can continue bulking for just 1 more week.

..This type of mentality is how permabulkers are born.

The truth is, bulking is addictive.

And it’s quite understandable considering you’re packing on more muscle each week, your strength is through the roof and cheat days are no longer sinful, but beneficial.

This unwillingness to start cutting is hugely counterproductive as there’s many benefits you’ll experience from cutting, making you look and feel better in the long run.

Here are 10 reasons why you should start cutting right now.

…Or tomorrow if you’ve already overeaten today (shame on you).

1. Your Muscles Look Bigger After a Cut

If you do a cut correctly, you’ll look bigger and more muscular as a result. This is because although you’re losing size, (in the form of fat), your muscles become more defined; making them look more impressive. This is why someone who’s shredded with 16 inch arms can look JACKED, but someone with 18 inch arms can look pretty ordinary.

It’s about how you look, not what it says on the measuring tape.

If you cut slowly, eating in a small calorie deficit, you’ll retain your muscle mass.

So stop worrying that you’re going to lose all your hard-earned muscle, this only happens if you severely under-eat (starve yourself). Even if you do this and experience muscle loss, it soon comes back once you increase your calories again.

During a cut, if you retain your muscle size and lose fat on your midsection, it’ll look like your muscles are actually getting bigger. This illusion can make a big difference.

If I had a dollar for the amount of times someone came up to me whilst I’ve been cutting and said “Wow man, you look BIG. Have you been bulking?” I’d be a millionaire right now.

They’re often surprised to hear that I’ve acually been cutting.

So, if you want to gain muscle mass – bulk.

If you want to have bigger-looking muscles – cut.

There are guys out there who haven’t actually got much muscle mass, but because they’re shredded they actually look quite big. Jake Gyllenhaal in Southpaw is a good example of this.

Us gym rats know this isn’t true, we can easily recognize when a guy’s got a lot of muscle, even if he isn’t shredded to the bone.

However, non-lifters can’t always tell the difference. There will be times when you’re putting on loads of quality muscle mass, but because your body fat has increased slightly, people question whether it’s “just fat”.

Your blood will begin to boil if you ever hear such idiocy from non-lifting mortals.

However, if you have heard this recently, it should should inspire you to start cutting and get ripped. 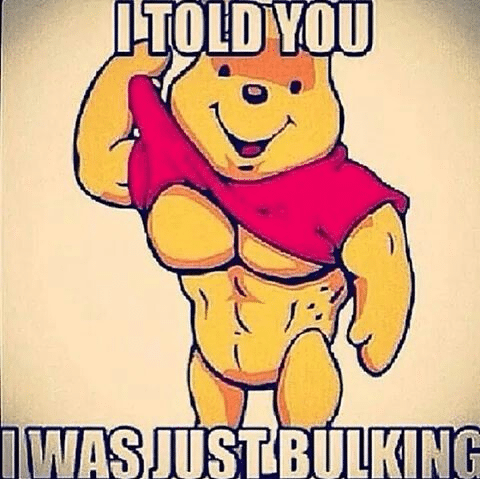 A lot of people’s motivation when they first start lifting weights is to build an awesome body aka to look better.

Looking better to some means building more muscle. Many build muscle by bulking, which can be seen as a short-term sacrifice in order to make gains. It’s a sacrifice because you gain some fat, meaning your face becomes more bloated/puffy-looking and your abs become less visible.

However, when you cut, you lose fat on your face; bringing out your cheek bones and making you look more masculine/alpha. Also women are more attracted to men who have a leaner face (compared to a bloated one).

…You’ll know this by the end of your cut when you start getting more looks/attention from the female kind.

It’s also common for a guy’s penis size to get bigger after losing a significant amount of fat. This shouldn’t come as surprise as blood flow is the main factor which determines the size of a penis (especially when erect).

Also, after losing weight, your risk of diabetes and cancer decreases. Studies have also shown that people who are overweight may have a shortened lifespan.

The more fat you’re carrying, the higher your conversion of testosterone into estrogen will be.

Thus by cutting and getting leaner, you’ll decrease this aromatize activity and increase your serum testosterone levels.

Higher testosterone levels means more strength, energy and confidence in everyday life. This will inevitably cause you to become more successful in your waking life and improve your overall well-being.

6. Better in the Sack

Not only will the opposite sex be more attracted to you because you’re leaner, but you’ll also be able to perform better in bed. As previously mentioned you’ll have increased blood flow to your penis, enabling better erections. But you’ll also have more endurance in the bedroom allowing you to up the intensity and go for longer periods.

…Let’s just say your lady will notice a difference.

Anyone who’s got to below 8% body fat before knows these feels.

It’s a sense of awe around you that takes place whenever you take your t-shirt off.

If you’ve got a ripped six pack, it won’t go unnoticed in today’s society. When it’s beach season you won’t be shy about taking your top off and girls won’t be shy to look.

Even in the winter, uploading a picture of your abs on Facebook will get people talking about you. Girls will be salivating and guys will be (either) inspired or envious.

No longer are the days when you need to win the Mr Olympia in order to get sponsored. Heck, you don’t even need to compete. If you’re in good enough shape and have a large enough following on social media, you can get sponsored by supplement companies, who will pay you a salary or/and give you free supplements each month.

However, in order to do this you need to be in top shape…and by that I mean sh-redded.

Getting to 6% body fat and having a good amount of muscle mass should do the trick. More often than not you’ll also need to approach companies and sell yourself to them.

The more shredded you are/the more muscle you have, the more prestigious company you’ll be able to attract.

So start that cut pronto!

Food costs money and sometimes it can be damn expensive.

By cutting, your calories go down and you’re less likely to splash out on expensive foods (such as takeaways and meals out). This is good for your wallet.

Also by spending less time eating, you free up more time in the day.

The leaner you are the better your skin will be.

This isn’t to say that fat people can’t have good skin – they can. However, if they were to lose weight their skin would dramatically improve due to increased blood flow and collagen production.

Why should I care about my skin?

Bodybuilding is a lifestyle, it’s about looking good and being healthy. What’s the point in being RIPPED if you’ve got poor skin. This is the finish on the canvas that highlights your masterpiece.

It’s like having a supermodel girlfriend but giving her $10 to go and buy a new wardrobe. You’re better than that bro.

Bodybuilders long for freaky, roadmap veins that spiral in and out of their muscles.

Here’s the 2 main factors that determine a person’s vascularity:

You can’t change how thick/thin your skin is – this is genetic. Guys who have plumper, thicker skin will have a harder time seeing their veins. On the flip side those who naturally have thinner skin, will see their veins more often.

Genetics aside, if you lose weight (fat), your veins will be situated closer to the surface of the skin. Consequently, your vascularity gains will skyrocket.

Also as you age your skin will naturally become thinner, which is why older bodybuilders often have insane vascularity.

What’s one of the best things about bodybuilding?

Don’t get me wrong, cheat meals are fun when bulking. But let’s face it, guys who aren’t happy with their body fat percentage don’t feel great after a cheat meal.

However, if you’re constantly in a calorie deficit, you’re kicking butt in the gym and melting fat for fun, you can enjoy epic cheat meals (guilt free).

When you’re cutting, cheat meals can actually ignite even more fat loss. A sudden influx of calories increases leptin levels, a fat-burning hormone which typically decreases when a person under-eats.

So, now you can have cheat meals like the Rock…without having to cry yourself to sleep.