Being a bodybuilder means you probably lead a very peculiar life. There are many things bodybuilders encounter in their day to day lives that normal people may never experience. I’m not even talking about the extreme diets, rigorous training regiment, the weird manscaping rituals. or even the severe lust for veiny glutes. I’m just referring to the tiny daily annoyances that bodybuilders go through that others just might not understand. So for your entertainment, here is a list of annoying things that bodybuilders have to deal with. 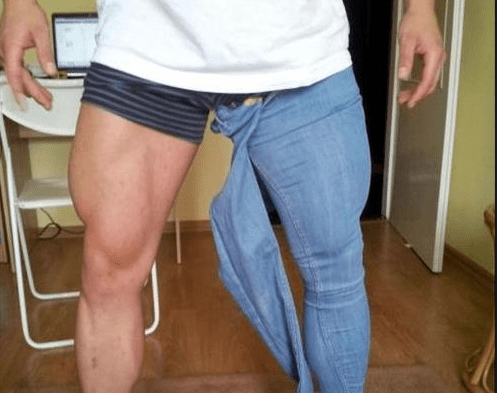 I recently went through the giant pile of clothes that have accumulated in my room over the last year and decided to give them to charity. While sorting I found a lot of nice shirts and pants that I had completely forgotten about. Well fuck, I’m not throwing that shit out. I figured it would be a good idea to try them on just to make sure they still fit though. They did not. Some of the stuff I have even worn as recently as 6 months ago and were practically brand new. Now, I’m not saying I’m a big green dong having Hulk looking motherfucker, but I have made some gains over the last year. I just hadn’t realized I’d be flexing my shirts into pieces for fun like I imagine the Rock does everytime he tries to undress.

So this is a common problem for bodybuilders I assume. Especially ones who are a bit strapped for cash and can’t just buy new clothes every time they size up. I like my shirts a little bit tight fitted, but not a condom on Shaq tight. That’s a bit of a problem as I get bigger because I either end up wearing shirts tight as fuck like those douchey Jersey shore type guys, or I buy new clothes. It’s quite inconvenient having to buy new dress shirts every time a special occasion pops up. (Here’s a bit of advice; when buying new shirts, don’t tear them off in public like some deranged Hulkamaniac. Unless you are at Walmart…then it’s acceptable.)

Again, I’m not like Hugh Jackman’s little brother or anything but I have a decent build. My arms are close to 17 inches around. Not anything crazy but enough that you can tell I pick up shit and put it back down from time to time. That being said, I’ve been having a lot of weird encounters with strangers lately. I’ve had more than a few people refer to my arms as guns and try to touch them. Usually it’s fat middle aged dudes or old people. I don’t want some jizz jockey putting his herpe infested hand anywhere on my body. Nor do I want some prune faced granny touching my bicep and telling me how if she were 70 years younger she would let me nuzzle her bodacious bosoms.

It seems very fucked up to me that this behavior is considered to be okay. It’s never a gaggle of sexy skanks that want to rub on me. I mean, everyone in my town looks like they were born near a nuclear plant but still. Just because you are a bodybuilder does not mean you crave attention from people. I can’t just go up to fit girls and start touching them…legally.

Look, I’m aware this is a played out bodybuilding trope. But seriously, attach that shit to the damn lid. It’s bad enough that you pay out the ass for a half empty tub of ass flavored protein powder, but does that fucking scoop really have to be so difficult to find? Why Even put that useless shit in there in the first place? Unless you like getting chalky powder every fucking where, you probably just use a spoon until you find it anyway. I don’t even mess around with protein powder anymore. I just eat live bears and wrestle Krakens and shit.

You ever shit your pants so hard that you burst the blood vessels in your eyeballs while immediately needing emergency butthole surgery? No, of course not. But it sure feels like that’s what will happen after you spent the day drinking coffee, energy drinks, and pre-workout. Most bodybuilders abuse caffeine products like Justin Bieber abuses our ear drums.

It creeps up on you fast and you don’t even realize it. I use to get all hopped up from a can of Monster and I was good for the rest of the day. Now, I drink one after my morning coffee so I can muster up the energy to make it to lunch time. I’ve cut way back, but for a while there caffeine did jack shit for me. Even now I can take pre-workout and it doesn’t barely do anything. Too many scoops just causes furious mud butt and not much else.

Speaking of the devil. The average person is not going to be addicted to pre-workout products. Meth sure, but not pre-workouts, the difference being pre-workouts are legal. I’ve already written an article on the symptoms of pre-workout addiction so I’m not going to get into that here. Just know that it can be quite annoying to have to take a pre-workout before every training session, not to mention potentially dangerous.

Eat clen, tren hard, blah blah blah it’s fucking hilarious right? Fortunately I’m not big or ripped enough yet to hear this dumb shit but I do see enough of it on the internet to get irritated. Any person who looks better than you must be on steroids. Even if they train constantly, eat right, go to bed early, and do all the stuff most lazy fucks don’t, they still must be on the sauce to look how they do. It’s getting ridiculous now. Yes, pro bodybuilders juice. Yes, physique guys also use gear. But I’ve seen people seriously calling out a 15 year old for using steroids. Even though he was like 130 lbs or something. If you have low bodyfat and put on even a small amount of muscle, you will look bigger than you are. Unless someone has luscious titties and erupting volcano looking back acne while being the size of Scott Steiner, they probably aren’t abusing steroids. Also, for every natural bodybuilder who has been randomly accused of doping, you should just go up to strangers and accuse them of shit to see how they like it. “Hey you, the skinny bitch over there reading the vegan cookbook. You’re so small. Do you use heroin? Holy shit, is that your husband there with the 70’s creeper porn stache? Hey, you John

Holmes looking jabroni, you drive a windowless van around school zones?” See, that shit isn’t cool. Have some damn respect for people.

7. Bars are not fun places.

Most of the time huge bodybuilders don’t really drink. Every once in awhile though it’s nice to go out and have a few cold ones with your bros. You know what sucks about going to bars when you look like the Juggernaut? Sometimes bar owners discriminate and do not wish to have you in their shitty establishment. They think your hugeness means you will be trouble. If you get too drunked up and start powerbombing bartenders through tables, who is going to stop you? Not to mention the fact that if you are in a dive bar things might be pretty cramped before you show up. Once you get there, it will be like having the cast of the biggest loser trying to squeeze in an elevator.

Going to a nightclub can be even worse. Most bouncers will not like it if you are bigger than they are. It is just not a good look for them so they might refuse you admittance. And even if you do get past Vin Diesel’s retarded stunt double, there’s still the problem of people thinking you ARE the bouncer. Trying talking to drunk chicks when they think you are the bouncer coming to kick them out.

8. Cars are no longer your style.

If you are a gargantuan you most likely have been that way long enough that you own a proper sized vehicle. What happens when you go out and someone else drives though? What if the shity Honda Civic your buddy has is too small for you and you have four more people getting in behind you? What if one of those people has the nickname large Marge? The answer to these questions is get new friends of course. Seriously though, getting in and out of small vehicles fucking sucks when you aren’t norman human sized. Getting on a public bus or subway can be even more annoying. Imagine having some dirty hobo rubbing his dirty hobo juice all over you because the subway is overcrowded and you are stuck standing next to him.

Much like being a 500 pounder scootin’ through Walmart or being a naked cowboy, if you are truly a huge muscular freak of nature you are going to catch some stares. Unfortunately, those stares usually come from other dudes. That might not be a problem with some guys, but it can be quite uncomfortable for others. A lot of guys workout so they can attract woman. Boy does that go south quickly after a certain point. Most women are not attracted to hairless gorillas. Creepy old men on the other hand, well, that’s a topic for another article.

This may be a bit specific, and maybe a lot of bodybuilders don’t go through this, but that doesn’t mean it’s not annoying as fuck all. My legs aren’t gigantic, but they are big enough that

my thighs rub together a little bit. That gets so uncomfortable very quickly. Couple big thighs with huge balls and things are much worse. If you don’t want to get chaffed, use baby powder, wear good underwear, and if you can help it, properly adjust your dick to ball ratio by taking captain Rick’s 8 hour natty vegan boat ride.

This is just a quick list of things i find irritating and I’ve heard others complain about. What kind of annoying things do you guys deal with?