When you hear the word addiction, you may think of it as the regular addictions like cigarettes, pot, alcohol and other drugs.

However, addiction is present even in healthy habits like exercising and optimizing your physique.

The desire to be the biggest, most aesthetic and leanest guy on stage, sometimes leads you to ‘Doing what you have to do to be the best’, or in other words- Performance enhancing drugs.

For today’s article, we’ll give you 10 bodybuilders that took it too far, and needless to say, some of them paid the price… 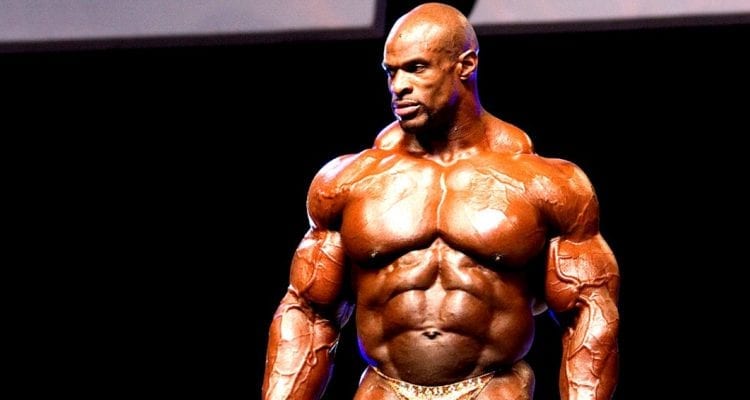 Ronnie Dean Coleman is the current record holder for the most consecutive Mr. Olympia wins, at 8 STRAIGHT wins.

He’s also a holder of the most professional wins for the international federation of bodybuilding and fitness (IFBB), at a solid number of 26.

Coleman had a tremendous genetic potential, that he realized in the gym, to conquer the bodybuilding stages, but he had to pay the price, as he took it way beyond the natural human limits.

Throughout the years, Coleman has reached amazing feats of strength but due to the fact he pretty much abused his body, he had to pay the price.

Ronnie is currently 55 years old and since his retirement in the 2007 Olympia, he has been through multiple back surgeries.

Nonetheless, Coleman’s records are so far intact, and he will remain a legend for years. 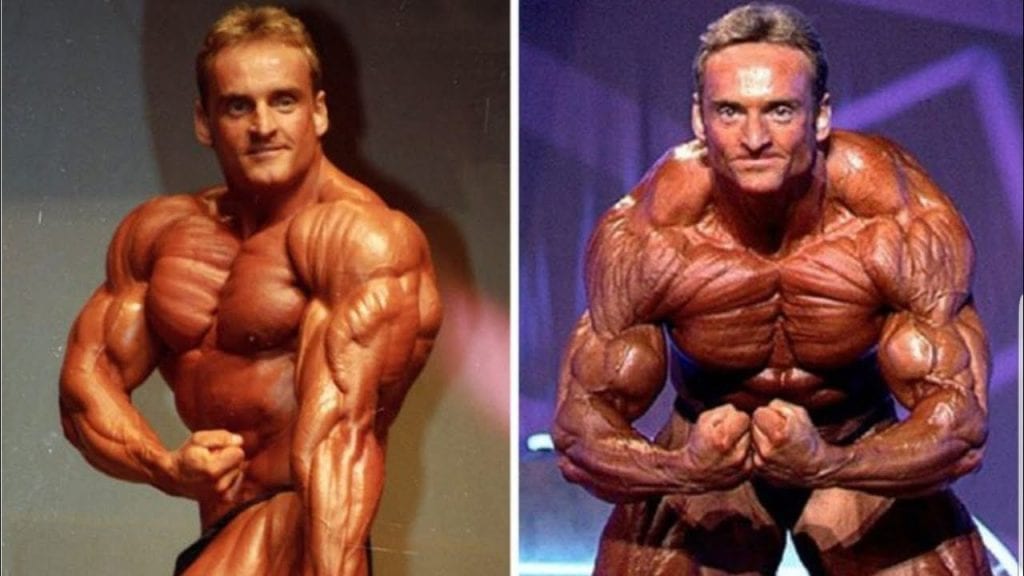 Munzer was an admirer of his fellow countryman Arnold Schwarzenegger and as such, he started abusing performance enhancing drugs early on.

Andre used a wide variety of substances, ranging from exogenous testosterone, to insulin, growth hormone, as well as potassium sparing drugs and other diuretics, to get him peeled for the stage.

Now, even though Munzer achieved amazing feats of muscle definition and leanness, it was by no means healthy and he had to pay the price.

Andreas was rushed to the hospital after a couple of days of intense stomach pain, following his last bodybuilding contest- The 1996 San Jose invitational.

Doctors decided to operate Munzer to stop an internal stomach bleeding, but during that time, his liver and kidneys failed.

After that, it was too late for a blood transfusion, as his condition was too severe. 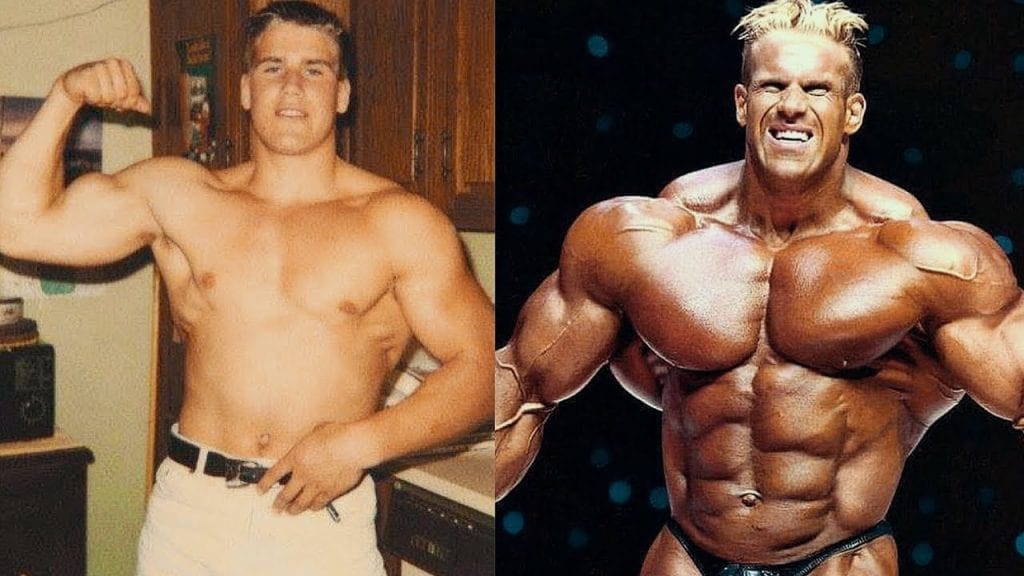 Besides his insane anthropometric measurements, such as the 58-inch chest, 22-inch arms and nearly 20 inch neck, 4-time Mr. Olympia Jay Cutler, has faced numerous suspensions due to his heavy PED abuse.

This was mainly due to his positive test for banned diuretics, during the 2001 Mr. Olympia contest, which was later on overturned. 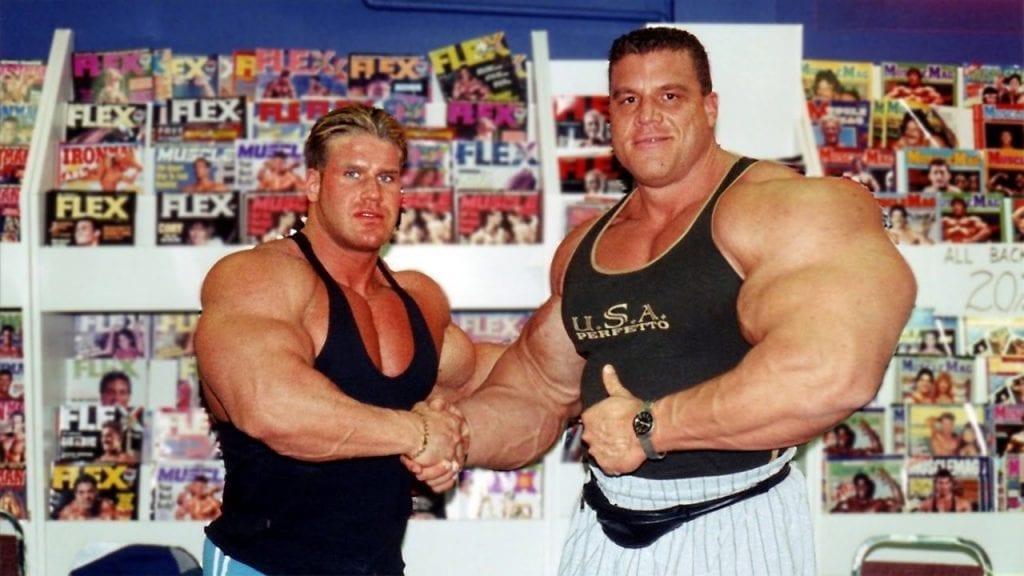 For the most part, you won’t see a non-enhanced human being weighing at a strong and fairly lean 400 lbs., during the offseason.

Greg Kovacs however was a ginormous 6’4’’ bodybuilder, who was as high as 420 lbs during the off-season.

His measurements were at 25 inches for the arms, 70 inches at the chest and an insane 35 inch quad measurement.

Such insane amounts of muscle mass that are way past the natural human limits however, take their toll on the body.

Kovacs was charged with the extortion of a nutrition supplement store owner in 2010 and in late 2013, Greg passed away due to a heart failure.

There is perhaps an interconnection between anabolic steroids and growth hormone, when it comes to damaging the heart.

Too many people using these substances are dying and it can hardly even be referred to as coincidence.

At his best, “Dennis The Menace” was weighing in at a solid, ripped 260 pounds. Needless to say, he was way out of the natural boundaries of what a human can achieve.

In 2004, James was arrested in Thailand for the possession of HGH and ecstasy tablets.

After having competed multiple times at the Olympia, The Menace never managed to do better than 4th place at the major bodybuilding show, which is why he announced his retirement in 2017. 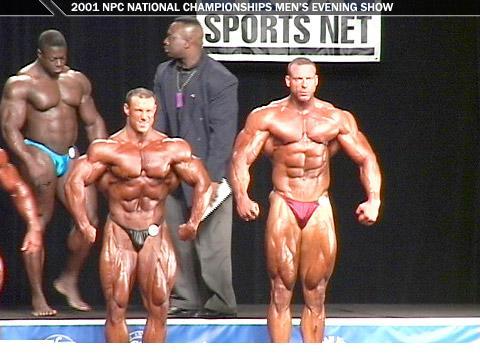 Noah is on the right here

A bodybuilding environment would quite simply change the definition of “Normal”, but even though that’s the case, Noah was considered one of the biggest in the game.

Steere is also known as “Big foot” and that is more than likely because of his enormous 6’6’’ frame, that is stacked up with bulging, quality muscle mass and weighing at a weight of 350 pounds! 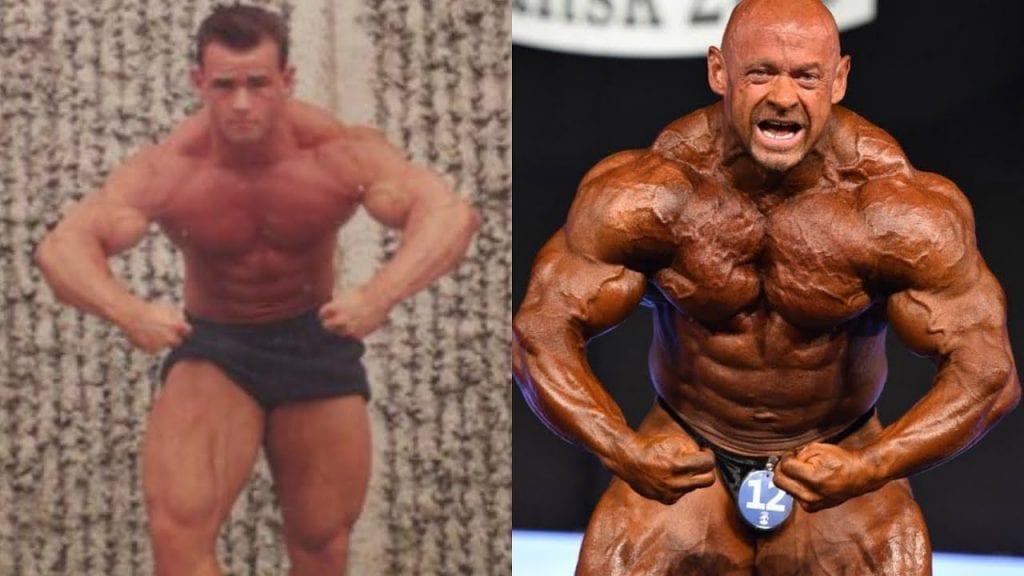 When massive bodybuilders like Branch Warren are the topic of discussion, one of the most commonly talked about topics is the steroid cycle.

And we don’t care how hard you train- If your measurements breach the human limits, like Branch’s 58 inch chest does, then you are more than likely on a performance enhancing drug, or a mix of them. 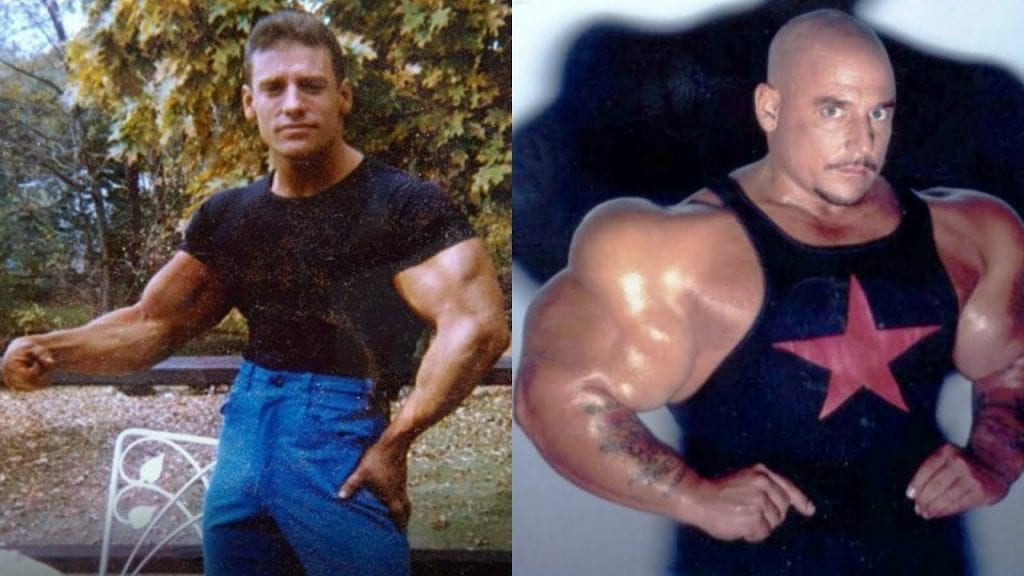 Gregg holds the Guinness world record for having the biggest biceps in the world, measuring at an insane 28 inches.

For 28 years, Valentino has followed a supposedly natural bodybuilding regimen, which however, did not set the record.

His record was only set after a series of steroid cycles, as well as obvious synthol injections in his arms. 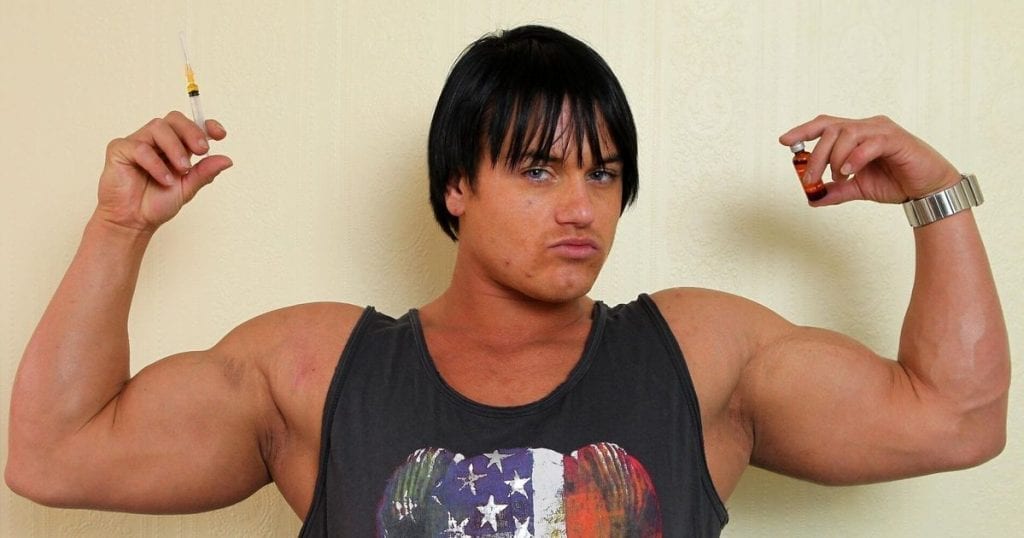 Candice who was once a pretty blonde, developed reverse-anorexia, also known as “Body dysmorphia”.

Even though Miss Armstrong was training for 3 hours a day, she was still convinced that her upper body was just too skinny.

Soon enough, a fellow gym goer pitched to her, the use of performance enhancing drugs and needless to say, she was instantly hooked.

After consistent, daily doses of “trenbolone”, in desperate attempts to improve her physique, Candice was left with broad shoulders and a 1-inch penis, as well as a more masculine look overall. 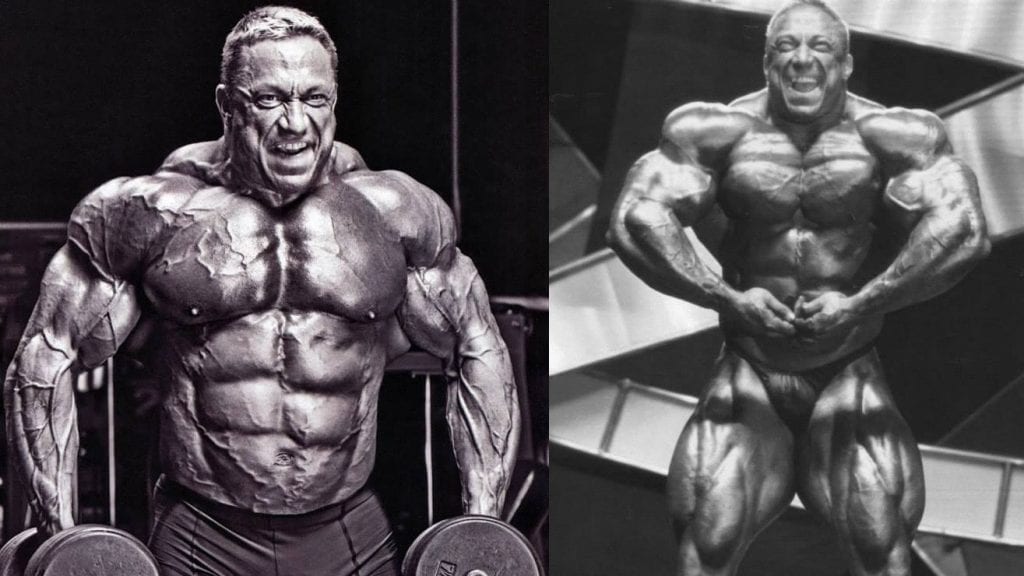 Markus Ruhl is a 47 years old, retired German bodybuilder. Interestingly enough, his training career began with a doctor’s recommendation, after Ruhl had a soccer knee injury.

Starting at a mere 120 pounds, Ruhl began training heavily 6 days per week and needless to say, just a couple of years later, he decided to compete on the bodybuilding stage.

Needless to say, a natural bodybuilder cannot hang in there with the big, juiced-up guys, which is why, Markus decided to take on to the dark path of steroid use.

His cycles consisted of insulin, HGH and exogenous testosterone and sooner or later, just like many other professional bodybuilders, Markus developed the so-called “Bubble gut”.